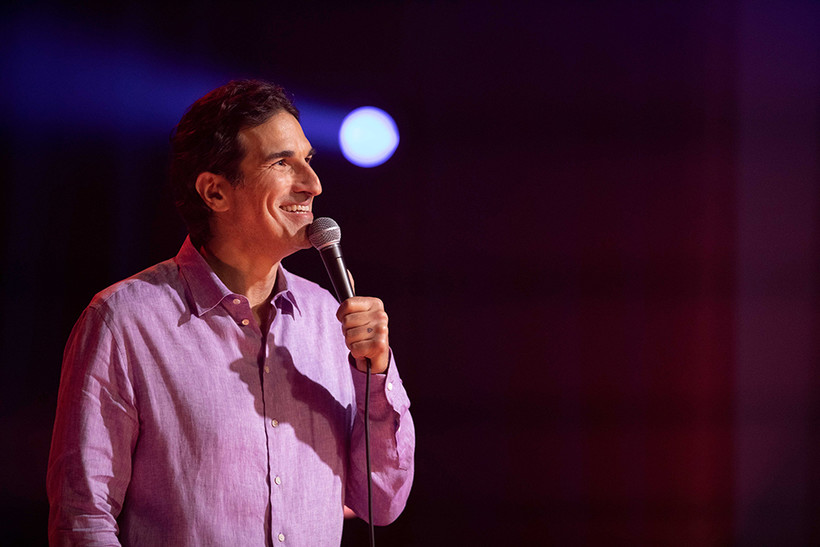 There’s a wrenching scene that opens comedian Gary Gulman’s HBO special, "Gary Gulman: The Great Depresh." It features the comic at a small Boston, MA comedy club in 2017 quietly admitting to the crowd he suffers from mental illness. There’s a few uncomfortable chuckles from the audience as they anticipate a bit that doesn’t come. Gulman concludes sadly from the stage that this moment "is like a cosmic bottom" for him.

It’s a powerful and apt entry point into a fascinating special that is part live stand-up and part documentary.

Gulman spoke with WPR’s "BETA" about the journey from that low point to the brave and hilarious performance featured in "The Great Depresh."

Gulman recalls that he’s suffered from depression and mental health issues from as far back as his childhood.

"I didn’t have a name for it back then. I was just constantly in fear and anxious about my schoolwork and my teacher and classmates and future. I would become very sad and isolated," he said. "My self-esteem was not very strong."

The title of Gulman’s special is the name he would eventually settle on for his mental illness. Throughout his set on suffering from and treating depression, Gulman and director Michael Bonfiglio weave in candid vignettes of Gulman sharing and discussing his struggles with his wife, fellow comedians and even his mother.

"Like most Americans, my mom was pretty ignorant about the signs and symptoms and I felt a little bit bad about exposing her obliviousness in the special, but at the same time I thought she was such a great surrogate for America and people of that generation," Gulman said.

Gulman would grow into a large and athletic teen and became strongly encouraged to play sports. He would find a love for basketball because, as he jokes in the special, it "is the only sport you can practice by yourself." However, the pressure of performance would only contribute to Gulman’s severe anxiety.

"I put so much into my basketball accomplishments and achievements that when I had an off-game, when I missed shots, I would get so down on myself and it became an indictment of my character and my person," Gulman said. "I would just take losses and bad games so seriously."

Gulman’s size and ability would eventually earn him a football scholarship to Boston College. He considers this development to be the birthplace of his awareness of depression. Gulman suffered through his first semester on the team, almost immediately understanding he wasn’t cut out for the aggressive mentality of collegiate-level athletics.

"Within the first few weeks, I decided that I was either going to quit the football team or take my own life or do something," Gulman said. "I was just in such a bad place."

Fortunately, a liaison for student athletes recommended Gulman speak with a therapist and he began his formal treatment of depression. It’s become a crucial part of Gulman’s recovery throughout his life and provided a much needed judgement-free arena to voice his anxieties and fears.

"This was a man who I quickly understood would not judge me or chastise me or make me feel guilty or embarrassed or shamed," Gulman said. "He just listened, and he made observations and perceived things I wasn’t even aware of. Just these insights that I never would’ve made on my own."

It’s perhaps because of his firsthand experience with the toxic masculinity surrounding sports that Gulman scoffs at and rejects blanket statements about millennials and the concept of participation trophies as a negative. Gulman, whose wife Sade ("not THE Sade, but my Sade," he jokes in the special) is a millennial, spends a big chunk of his set openly promoting and praising a more positive perspective of the generation and their inclusive nature and their repulsion to bullying.

"I feel I would’ve been better served by a community that had the same values as millennials. That were as aware of mental illness, as aware of the damage that bullying and teasing and being undermining and being selfish causes," Gulman said.

Gulman also exposes the myth of the sad clown paradox.

In a passage from the special, Gulman and longtime friend and fellow comedian Robert Kelly discuss a common belief among comedians and artists that if you remove the depressive tendency of your psyche, you will give up the inspiration of your comedy or art.

"To the people who think they’ll lose their edge, give it a try. You can always go back to your misery and your discomfort if it doesn’t work out. I think that most of us have enough experience with pain and suffering to write about it from a safe spot far away from it," Gulman said.

Gulman also appears this year in the comic book film "Joker" which premiered the same weekend as "The Great Depresh."

In the movie, which itself comments on mental health in society, Joaquin Phoenix plays comic Arthur Fleck whose primetime failure turns him into the titular crime boss. Gulman, who cites that weekend as the most exciting of his career, finds that particular origin story tragically comedic and familiar.

"I know how frustrating and discouraging it can be in standup and some nights you just want to turn to a life of crime rather than have to deal with difficult audiences and uninspired bookers and just the struggle of a young comedian," Gulman quipped.

It’s fitting the special ends with a scene so diametrically opposed to the one that opens it.

After wrapping his standup with a touching and encouraging passage on living with mental health, Gulman is framed from behind with the glow of the spotlight and receiving a standing ovation from the sold out theater. An image of a career highpoint.