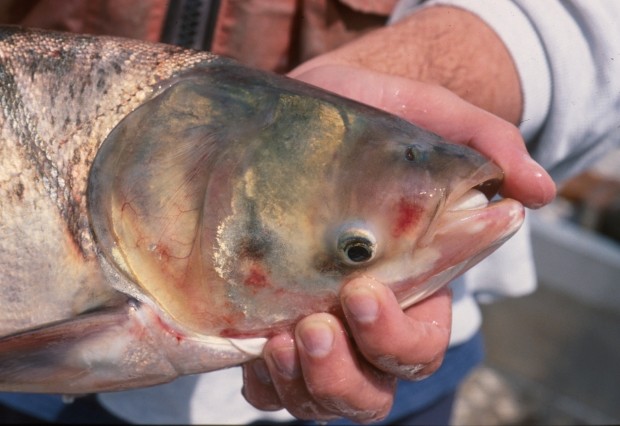 An Asian carp specimen. Photo courtesy of the Wisconsin Department of Natural Resources

New research shows that climate change may make it easier for Asian carp to grow and thrive in Lake Michigan if the invasive fish is introduced into the Great Lakes. The study, published Wednesday in the journal Biological Invasions, finds that warming would likely create less competition for food from invasive mussels.

Researchers also found increasing phosphorus pollution was the most influential factor in suitable habitat for bighead and silver carp. The research builds on a study released last year that found Asian carp could become more widely established in the lake.

Zebra and quagga mussels were first discovered in the Great Lakes around 30 years ago, and they were thought to be a potential barrier that could prevent the voracious Asian carp from gaining a stronghold if introduced into Lake Michigan because both the fish and the mussels compete for the same food source - algae and plankton.

"Some people have argued that the mussels essentially have beat the carp to the buffet table and have eaten up all the food," said Peter Alsip, ecological modeling data analyst at the University of Michigan Cooperative Institute for Great Lakes Research (CIGLR) and the study's lead author.

But, Alsip notes that mussels are bottom feeders that only feed on nearby food while Asian carp swim freely throughout the water to fetch a meal. The research conducted by CIGLR and NOAA's Great Lakes Environmental Research Lab found that further warming of the lake's surface would shorten the window in which they compete for the same food.

Food particles move easily from the surface to the lake bottom when mixing within the waters of Lake Michigan occurs in the spring and fall because water temperatures remain roughly the same. During these periods, Asian carp and mussels would be in the most competition for the same food source.

But, in the summer, surface water warms up faster than the rest of the water below. Alsip said that creates conditions which prevent food from making its way to mussels on the lake bottom. The study found that when the lake experienced a warmer winter and spring, that surface water warming occurred earlier in the year.

"Mussels would be cut off from that food earlier in the year, leaving more food for bighead and silver carp," said Alsip.

Researchers note that surface waters on the Great Lakes are already warming faster than the global average. Under a warmer scenario, the number of days where habitat would support growth of the Asian carp increased by 10 days when compared to 2010. In a warm year, both bighead and silver carp saw the greatest increase in annual growth in Green Bay.

"If we have a shorter winter because climate warming increases, that means they have potentially a longer growing season in an area that already has a lot of food, so they potentially could grow bigger and have more of an effect on the ecosystem," said Alsip.

Green Bay has suffered from "dead zones," where low oxygen levels can cause aquatic species like fish to die or leave the area. The problem is caused by excess nutrients from cities and farms running off the land. In the last decade, Wisconsin has seen more frequent, intense storms as a result of climate change that contribute to nutrient loading in lakes, rivers and streams.

Researchers also found Asian carp saw the longest growing seasons, the highest fish weights, and greatest amount of suitable habitat under high phosphorus loads that were typical during the 1970s and 1980s when work began to limit excess nutrients in the lakes. Bighead carp grew an additional 24 percent in offshore areas of the lake and up to 40 percent of their initial weight in nearshore areas.

The study found bighead carp could have grown anywhere from 8 to 40 percent each year if they had been introduced when phosphorus levels were higher and zebra and quagga mussels were not yet present in the lakes. While levels have declined over the last several decades, research indicates that changing land use due to urbanization and climate change could increase phosphorus levels in Lake Michigan.

Alsip cautioned that the study is not a forecast of what the lake will look like in the future, but an analysis of multiple stressors that may make it more vulnerable to the invasive fish.

Asian carp are considered a serious threat to native fish in Lake Michigan like walleye, bass and lake whitefish, according to Todd Kalish, deputy fisheries bureau director for the Wisconsin Department of Natural Resources. The invasive fish would likely thrive in nearshore areas with warmer waters and large concentrations of plankton that are known to be some of the most productive areas for fishing.

"Due to the invasive carp's voracious appetite and ability to reproduce extremely rapidly, we're really concerned about the impacts that silver carp, bighead carp, black carp and grass carp can have on our native fish population," said Kalish.

Asian carp can consume up to 40 percent of their body weight in food each day, out-competing other species. The invasive species threatens the Great Lakes' $7 billion fishing industry and $16 billion recreational boating industry.

"If they get into the Great Lakes, it will have a significant impact on recreational anglers, commercial anglers, charter anglers and coastal communities will be impacted," said Kalish.

Asian carp have been knocking at the door of the Great Lakes for years and signs of the fish have been found around five miles from Lake Michigan.

The U.S. Fish and Wildlife Service coordinates with multiple state agencies to conduct sampling to track environmental DNA of the fish. Illinois has several electric barriers and more than a dozen miles of fences to keep the fish from making its way into Lake Michigan. The state also contracts with commercial fishermen to remove more than 1 million pounds of carp from nearby waterways each year, according to the Illinois DNR.

Great Lakes governors have endorsed a plan recommended by the U.S. Army Corps of Engineers that would cost as much as $831 million to add defenses at a crucial choke point on the Illinois Waterway System at the Brandon Road Lock and Dam in Joliet. States and environmental groups have called on Congress to fund the plan, which would include installation of an electric barrier, noisemakers and bubble curtains.

But the plan has not yet received funding. Michigan also withdrew around $8 million it had set aside to assist Illinois with funding its share of the project due to the coronavirus pandemic.

The Army Corps is still negotiating with the state of Illinois on an agreement for preconstruction, engineering and design of the project.