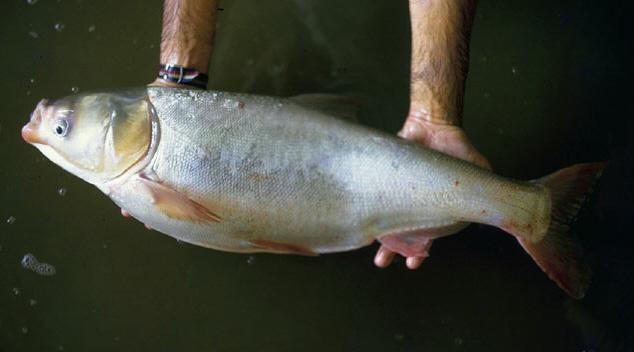 Great Lakes governors and Canadian premiers have adopted a resolution to prevent the spread of Asian carp into the Great Lakes by taking action at a strategic choke point in Illinois. They say they will support Illinois in its role as the nonfederal sponsor for the Brandon Road Lock and Dam project.

The leaders of the states and provinces that border the lakes have said Asian carp threatens native fish and the lakes' $7 billion recreational fishing industry.

The plan recommended by the U.S. Army Corps of Engineers would cost at least $778 million — and possibly as much as $831 million — to strengthen defenses at the lock and dam.

"There's not a specific statement to committing dollars," said Peter Annin, author of the "Great Lakes Water Wars." "But it's certainly a symbolic commitment that there's interest in the region to move forward with this lock and dam, which is not going to happen without nonfederal dollars — nonfederal commitments from the governors and premiers."

The Army Corps' plan would include additional measures like noise makers, an electric barrier and bubble curtains to prevent the invasive fish from spreading into the Great Lakes.

Annin, who directs the Center for Freshwater Innovation at Northland College, noted that Illinois has raised concerns over the cost of the project because nonfederal partners would fund 35 percent of the project.

"There's been a lot of concern in the state of Illinois about whether the Great Lakes region is going to move forward with this protection effort for Asian carp and other invasive species and who's going to pick up that 35 percent nonfederal part of the bill," said Annin.

The resolution does urge Congress to provide funding for engineering and design on the project.

David Naftzger, executive director of the Great Lakes St. Lawrence Governors and Premiers, said there's a need for more clarity about the Army Corps' plan and its various elements.

"Then, the discussions around funding can follow," said Naftzger. "But this resolution is an important statement around having a joint conversation about those issues so decisions can be made, construction can move forward and protections can get put in place."

At the summit of the governors and premiers last month, Wisconsin Gov. Tony Evers expressed doubt that the Army Corps' plan would be the solution to prevent the spread of Asian carp, saying they’ll analyze whether it's reasonable.

"The governor is leading this bipartisan group of governors in confronting a serious threat to our economy and environment," said Evers spokeswoman Melissa Baldauff in an email. "He is committed to working together to get the ball rolling on this important issue and urges the federal government to act promptly on funding the Brandon Road project."

Wisconsin Department of Natural Resources Secretary Preston Cole said in an interview Thursday that Wisconsin hasn't yet been asked to provide funding for the project.

"We know that Michigan's in the game, and we haven't been asked. That's something that we're going to have to deal with once we know what the number is," said Cole.

The DNR Secretary added agency staff would examine what the Army Corps is proposing and what's necessary.

"This fish species gets away from us, we're all in trouble," he said.

Michigan Gov. Gretchen Whitmer said Wednesday she is pleased Great Lakes leaders are working together on addressing the threat of Asian carp.

"This unanimously adopted resolution is a real solution that ensures that we move the Brandon Road Lock and Dam forward while addressing the high costs of this project," said Whitmer in a statement. "I will continue to work with our congressional delegation and Governor Pritzker to protect our precious Great Lakes and our environment."

Jordan Abudayyeh with Illinois Gov. J.B. Pritzker's office said the state looks forward to hosting next week's meeting with Great Lakes states and the Army Corps to discuss the project. Great Lakes leaders are set to meet in Chicago on July 16 to July 17.