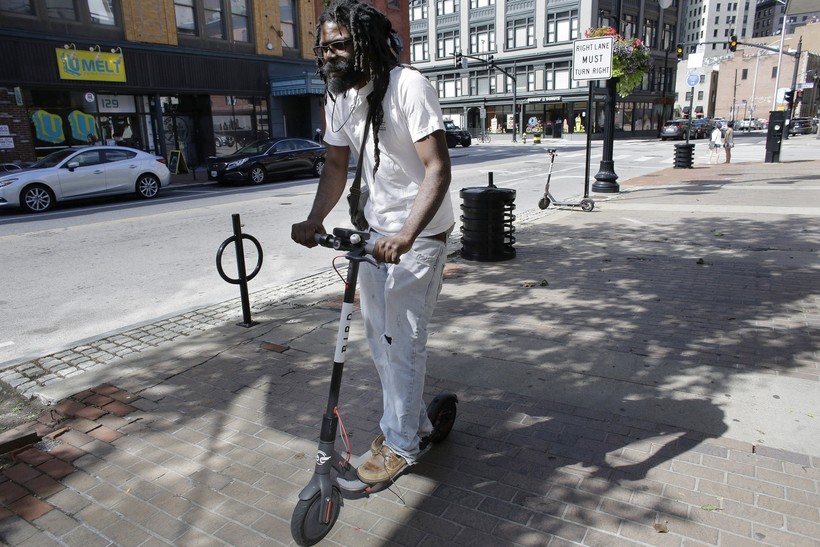 Officials from the city of Milwaukee and the electric scooter company Bird Rides Inc. reached a settlement in federal court this week —  nearly a year after the scooters suddenly appeared on city streets.

Court records don't disclose the settlement's details and it remains unclear when — if ever — the scooters will return to Milwaukee streets.

Jonathan Hackbarth, an attorney for Bird Rides, said his team is unable to comment on the settlement at this time.

The California-based company’s scooters caused a brief but heated debate in the city last summer after a flock of around 100 landed in Milwaukee in late June. They appeared overnight and without warning to local officials, many of whom soon raised concerns over the potential dangers, nuisances and legal problems they might pose.

Unlike the city’s bike-sharing program, Bublr Bikes, Bird scooters don't have fixed stations. Riders — who participate through a smartphone app and pay per minute — can hop on and off the dockless scooters anywhere.

But state law currently prohibits riding the electric scooters on public streets or sidewalks, according to Milwaukee officials. A June 2018 statement by Alderman Robert Bauman, chair of the Milwaukee Public Works Committee, referenced the city attorney's determination that a host of state statutes — those pertaining to vehicles, motor vehicles and play vehicles — render the scooters illegal and riders liable for a $98.80 citation for operating an unregistered motor vehicle on a highway.

"It's irresponsible for this company to come into Milwaukee and place the unsuspecting public in legal jeopardy," Bauman said in the statement. "It has recklessly undertaken a publicity stunt which could victimize its own clientele by encouraging them to violate the law and suffer consequences because of it."

In July 2018, city officials planned to ask a judge in Milwaukee County Circuit Court to order Bird to remove its scooters, but the company requested the case be moved to federal court.

That same month, the Common Council passed a motion allowing the city to impound Bird scooters parked on the sidewalk. It also passed a unanimous resolution asking the state to legalize motorized scooters.

Alderman Tony Zielinski, the resolution's lead sponsor, said in a statement: "As we continuously look to attract and retain young talent in Milwaukee, the need to allow these scooters is obvious."

Zielinski said the scooters provide transportation alternatives that reduce impact on riders' wallets and the environments, and may provide revenue for the city. Bird had "expressed interest in the possibility" of paying the city $1 per day for each scooter.

Last August, however, Bird officials  voluntarily removed its fleet from Milwaukee. The company issued a joint statement with the city.

David Estrada, the head of public affairs and chief legal officers, wrote: "We are thankful to have the opportunity to work with Milwaukee city leaders and look forward to bringing Birds back to residents who have already come to enjoy and benefit from this new mode of transportation."

Mayor Tom Barrett said he hoped Bird and other scooter-sharing companies would return once legal and safety concerns — such as speed — are resolved.

Now, nine months later, the city and company have settled in federal court, and court documents indicate attorneys for both sides will finish up the paperwork within the next two weeks.

Meanwhile, bills introduced in the state Assembly and state Senate in April would make operating motorized scooters, like those from Bird, legal on highways. It would exempt them from registration with the state Department of Transportation. Both bills define electric scooters as devices weighing less than 100 pounds with "handlebars and an electric motor" that receive power "solely" from the motor and the rider. They can't exceed 20 mph on a "paved level surface when powered solely by the electric motor." Motorcycles, motor bicycles and mopeds don't qualify under the proposed legislation.