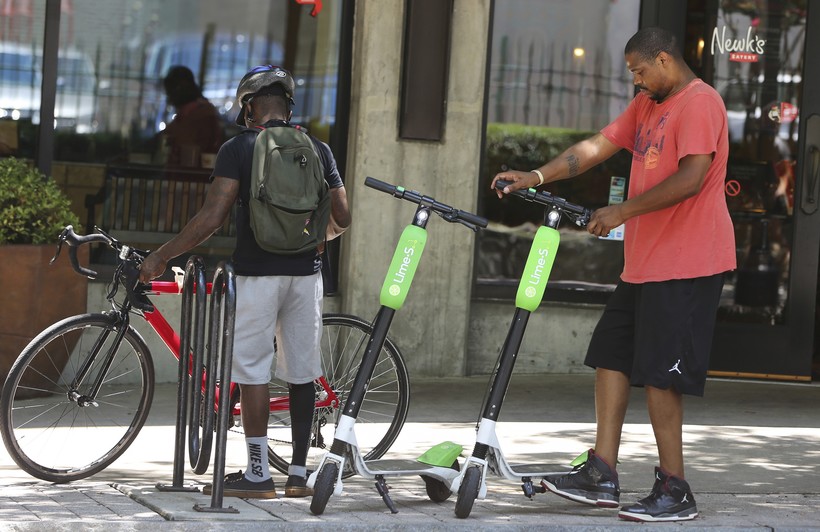 In this Tuesday, June 26, 2018 photo, a man parks his rented dockless scooter outside of a restaurant in Atlanta. Cities across the U.S. are grappling with how to deal with electric scooters that have begun appearing in sidewalks overnight without any regulations.  Brinley Hineman/AP Photo

Milwaukee Dockless Scooters Case To Be Heard In Federal Court

Cities Across US Grappling With How To Deal With Electric Scooters
By Ximena Conde and The Associated Press
Share:

Cities across the United States are grappling with how to deal with dockless electric scooters that have begun appearing along sidewalks overnight without any regulations.

Lawsuits and cease-and-desist orders have sometimes followed the arrival of California-based companies Bird Rides Inc., LimeBike and Spin. Some cities say the scooters are illegal to operate on streets or sidewalks where they get dangerously close to pedestrians. And because the scooters are dockless, they're parked anywhere when a ride is over, causing cities heartburn over blocking sidewalks.

Now, the city of Milwaukee wants to get Bird scooters off its streets and sidewalks after they appeared in late-June.

A hearing was scheduled for Friday morning in Milwaukee County Circuit Court where the city planned to ask the judge to order Bird to immediately remove its scooters.

It was supposed to be the first time a complaint against Bird would be argued in court, potentially providing the first judicial opinion in the struggle between cities and the startups.

But Thursday afternoon, the company filed to have the case moved to federal court arguing for diversity jurisdiction — a principle meant to afford out-of-state litigants a nonbiased court.

The case also qualifies for federal court because the amount in controversy would exceed $75,000.

As of the time of Thursday's filing, Bird claims people have taken more than 6,900 rides in Milwaukee. A $200 fine per ride would run potential forfeitures upward of $1.38 million.

According to the company's website, the only scooters owned by Bird in Wisconsin are in Milwaukee.