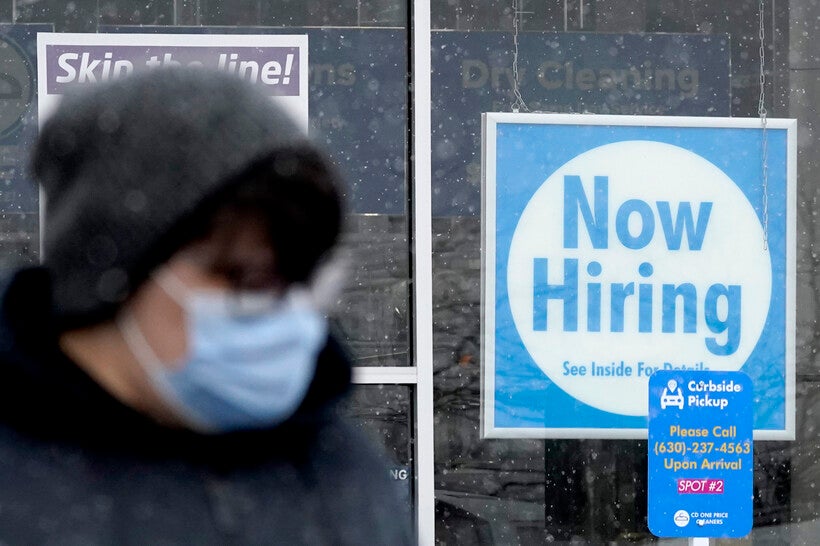 In this Saturday, Feb. 6, 2021 photo, a now hiring sign is displayed at a CD One Price Cleaners in Schaumburg, Ill. Nam Y. Huh/AP Photos

Central Wisconsin businesses will seek to recruit recently discharged members of the U.S. military, people with disabilities and those who've been incarcerated. Those are components of an effort promoted by local business groups seeking to address a workforce shortage a Wausau Chamber of Commerce leader calls a "long-range threat" to the region.

At a press conference Monday, chamber leaders from Wausau, Stevens Point, Wisconsin Rapids and Marshfield said workforce shortages experienced across the state are especially acute in the central region. Statewide, Wisconsin's unemployment rate hit a record low of 2.8 percent in March, and the state’s labor participation rate of more than 66 percent is well above the national average. And the unemployment rate in recent years has tended to be lower and the labor force participation rate higher in central Wisconsin than the statewide averages.

"We're not in a big metro area," Wausau Region Chamber of Commerce president Dave Eckmann said. "In this day and age, we simply do not have enough talent to support the economic growth happening in all of our communities."

That means employers need to aggressively find ways to expand the local workforce, including by actively marketing to people with an inconsistent work history or others that employers may have overlooked in the past. And, the group said, it means a regional approach to attracting new people here.

The chambers will host a summit next month meant to offer employers ways of addressing the workforce shortages. Angel Whitehead of Wisconsin Rapids' Heart of Wisconsin Chamber of Commerce said addressing a shortage of child care options is a necessary step toward improving hiring and employee retention in the region.

"Now more than ever, we need to look at every avenue and collaborate," Whitehead said.

Wisconsin's rural counties have aging populations, which in many places has meant population loss, or at least slower growth than in, for example, rapidly expanding Dane County. The business groups said they'll seek to market central Wisconsin communities as a cohesive unit.

Marathon, Lincoln, Portage and Wood counties should "think of ourselves as our own metro area of about 300,000-plus people," Marshfield Chamber president Scott Larson said. "The image of this central Wisconsin area looks a whole lot different when you're marketing to people outside of the state or outside of the region."

Eckmann said the region will be rolling out a new marketing campaign using state grant funding. Spending on efforts to market Wisconsin in other states have been a point of political contention; the business lobby Wisconsin Manufacturers and Commerce has criticized Gov. Tony Evers for allegedly not doing enough of it.

Businesses consistently rate struggles to hire as their biggest concern, and the subject has often been a point of contention among policymakers. Last summer, that political debate centered largely on the increased federal unemployment benefits offered during the pandemic. But those expanded benefits expired in September, and there is little evidence that their expiration had a marked effect on the trajectory of unemployment in Wisconsin.

For slower-growing central Wisconsin, the leaders said a cooperative approach is the only chance of success.

"We are in a talent desert," Eckmann said. "And if we're going to address that, it’s all of us working together."