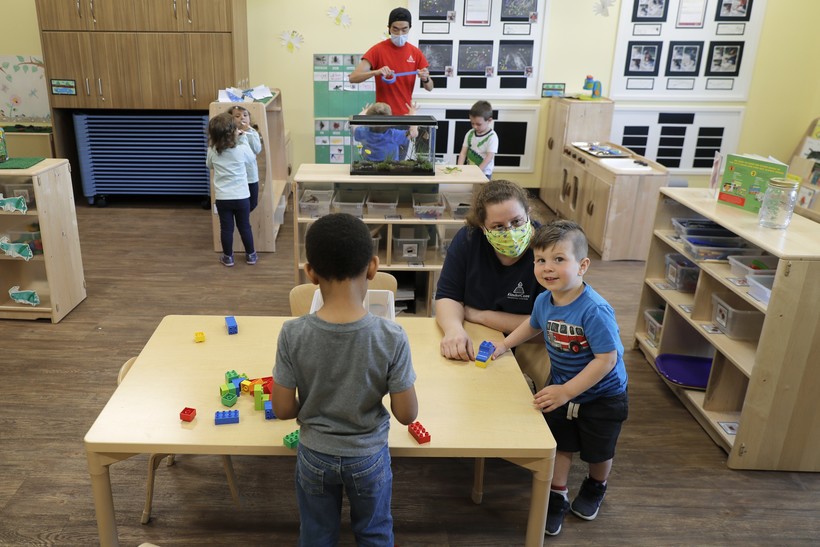 In this May 27, 2020, photo, teachers Jana Blair, right, and Aaron Rainboth, upper-center, wear masks as they work with kids at the Frederickson KinderCare daycare center, in Tacoma, Wash. Ted S. Warren/AP Photo

Parents and other caretakers of young children are all too familiar with the struggles of finding child care. Day care facilities are expensive, if they're even available — some areas of Wisconsin have extremely limited or no close options, and for those that do have facilities nearby, there are often wait lists just to get a spot.

For providers, the math doesn’t look much better. Despite the high rates families pay, worker wages are low — the median in Wisconsin is $10.66 an hour, according to a report from the Center for the Study of Childcare Employment (CSCCE), which doesn’t even meet the living wage for a single adult with no children.

Caitlin McLean, a senior research specialist at the CSCCE who compiles state-level reports on the child care workforce, notes that in Wisconsin, the poverty rate for early childhood educators is nearly 20 percent.

"Sometimes people think, 'Oh, if I'm paying a lot for my child's tuition, then educators must be doing fine,' but that’s not the case," she said. "Educators are really subsidizing the system with their low wages."

Child care centers are operating on small margins. They have to pay for their buildings, for cleaning and supplies, for workers and other basics. Brooke Skidmore, director of The Growing Tree Early Learning Center in New Glarus, said providers also lose money on their youngest charges. The ratio of staff necessary to keep an eye on children ages 2 and under adds up quickly.

But, she said, "infants and toddlers are the feeder for the program. You hope they stay."

Skidmore said it was hard to keep going even before the coronavirus pandemic, as there's a shortage of early educators — especially in her area, as many teachers move to Dane County or other, more affluent, more populous areas where they can earn more.

When COVID-19 hit, it made things worse.

Skidmore said The Growing Tree lost nearly $110,000 last year by staying open at far below its usual capacity. It's gone from having around 100 children enrolled to 40, with only half of its rooms open. When the center reopened after briefly shuttering during the statewide lockdown, only four teachers initially returned. And because Skidmore couldn’t afford to pay overtime, she had to cut the center’s hours.

That's common as many child care providers have fewer children enrolled in part because of safety concerns and local restrictions on capacity. A recent report from the Wisconsin Policy Forum found that after initially spiking in April, the number of Wisconsin children getting subsidized child care is down substantially. The report attributes that drop in part to the safety and capacity limits, but also to more families staying home and higher rates of unemployment. Families need to be working or engaging in approved work-related activities to get subsidized child care.

The Growing Tree is now up to six teachers, including Skidmore. They’ve managed to slowly increase their open hours, with extra time set aside or cleaning, but are still closed on Fridays.

"It’s a difficult situation for teachers to be in," said Skidmore. "It's low status, low wages but now with the increased risk that comes with this field, especially with being in a space, in an environment where we can’t follow CDC recommendations with regards to social distancing and mask wearing (because the kids are too young)."

The Work Of K-12 Teachers, Without The Organized Voice

"Early educators really lack that kind of organized voice that K-12 educators have," she said. "In child care especially, there was really a lack of attention to educators’ needs (during the pandemic.) It was about, 'We need child care open because it was essential for all the other workers.'"

An expensive, scarce, underpaid child care system has been able to endure in part because of the long-term devaluing of care work, specifically as performed by women and especially women of color, McLean said.

'These Are The Most Important Years Of A Child’s Life'

Researchers like McLean and providers like Skidmore point to the importance of children's earliest years on their development.

Ninety percent of brain development occurs before age 5, and research has repeatedly shown that early childhood development impacts not only children's future success in school, but also their future income and rates of incarceration.

Skidmore said child care is so often framed as a family issue, something that parents and caregivers have to think about but that childless people or businesses can leave to the market. But that that overlooks how much those early years affect the economy and the workforce for everyone, she said.

"We seem to be in this society that is fine to put money towards criminal costs, to incarcerate and all that, but we won’t do anything preventative in the beginning to give children an equitable start," Skidmore said. "This is part of our education too, and why we don’t provide it free, I just don’t understand."

"By continuously neglecting this time period, it’s really being penny wise and pound foolish," she said. "If we invest in high quality early education, we could be getting the most bang for our buck."

Despite the havoc the pandemic has wrought on an already fragile early education system, child care providers say there's a silver lining. More people are paying attention to the importance of early childhood education.

President Joe Biden’s recent infrastructure plan, which classified care work as infrastructure, was encouraging, said Skidmore, though she’s waiting to see what comes of it.

"This is the first time I’ve actually heard people use it in terms of infrastructure for our economy," she said. "I just hope that our government is able to put the money toward the workforce, because the workforce really ties in to all the factors of early child care — the quality, the accessibility, the affordability."

McLean said the United States wouldn’t have to reinvent the wheel when it comes to setting up a publicly funded, universal early education program. It would be similar to the establishment of public schools and is already common in other developed countries.

"It's really down to the people who are most affected, so workers, or parents, to say, 'we’re not going to stand for this any longer,'" she said.