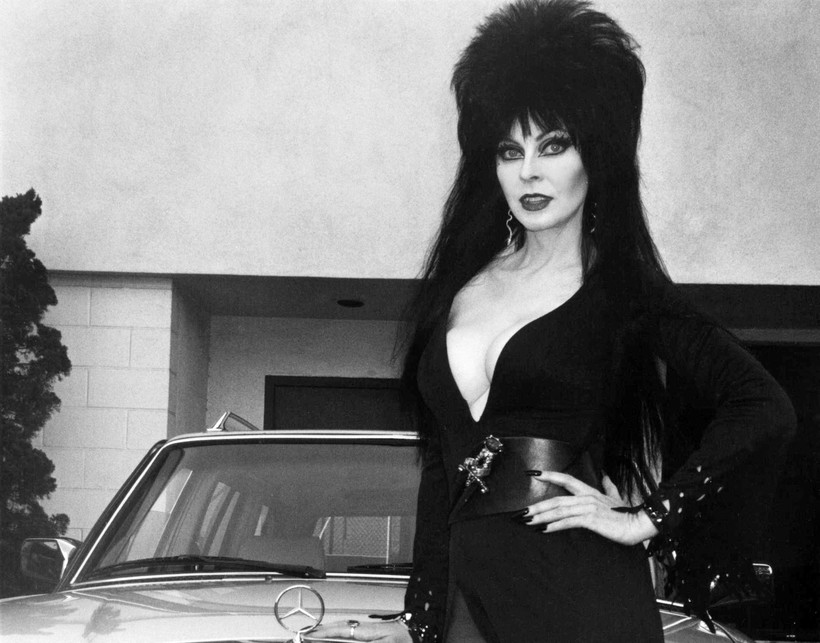 Cassandra Peterson reveals the woman behind Elvira, Mistress of the Dark

Her memoir 'Yours Cruelly, Elvira' offers intimate details about her life and career
By Doug Gordon
Share:

Cassandra Peterson has spent the last 40 years playing Elvira, the Queen of Halloween, and the self-proclaimed "Horror Hostess with the Mostess." And she's become a pop culture icon along the way.

But, there's so much more to Peterson's story than her alter ego.

She's released a memoir, called "Yours Cruelly, Elvira: Memoirs of the Mistress of the Dark." It’s a funny, touching, and ultimately revealing look at how a little girl from Manhattan, Kansas became a horror icon. As she says, "the drama began only a year and a half into her life.”

"My mother was dying Easter eggs, and she was outside, and we had a bunch of eggs boiling in a big cast iron kettle on the stove," Peterson told WPR's "BETA." "I pulled a chair over, climbed up to look in at whatever was bubbling around there on the stove and must have lost my footing because I grabbed the pot and pulled it over on me," Peterson recalled.

Thirty-five percent of her body was covered in third-degree burns.

"And back in those days, 25 percent of your body burned third-degree was considered not survivable," she said. "So it was really kind of a miracle that I lived through that."

In her memoir, Peterson writes that after the accident, she felt like a misfit with her burns and scars. But that feeling of being an outsider led to her love of horror.

"Kids made fun of me and teased me and bullied me about my scars, and I became very shy and withdrawn," Peterson said. "And at one point, sometime between the second and third grade, my cousin Danny took me to see my first horror movie, 'House on Haunted Hill,' and it just changed my life. I've talked to other people, fans, some who have scars or disabilities. And I guess they kind of see a fellow creature in horror movies that they feel like it's them."

At age 14, Peterson left an unhappy home where she was emotionally and physically abused, and within three years she was performing at the Dunes Hotel in Las Vegas as the youngest showgirl in town.

She decided to pursue a career as a show girl because of the 1964 film, "Viva Las Vegas," starring Elvis Presley and Ann-Margret.

"When I saw it, it was like some kind of epiphany," she said. "This is what I want to do, I want to go to Vegas, I saw there were showgirls in the movie. I'd never even heard of showgirls or knew what they were. And suddenly I became obsessed with wanting to be one."

While she was working in Las Vegas, she met celebrities like Frank Sinatra, Sammy Davis Jr. and Tom Jones, but it was really her encounter with the King that marked a turning point in her life.

Presley watched Peterson perform in Las Vegas. After the show, she attended a party in his hotel suite.

"And when I met him, we began talking, and we talked for the entire night," she recalled. "I mean, until the sun came up the next day, and he talked about everything in life. I told him I was in Vegas because of him. And he told me that it was no coincidence. And he got very heavy with a lot of things about astrology, numerology just having things happen because you want them to happen. And later he told me that he thought I should get the hell out of Vegas because I was too young to be there. And there was no place for a young girl. And it was kind of depressing because I thought I had, you know, finally achieved my dream of a lifetime. And that's where I would be until I became the oldest showgirl in Vegas, which would be now. And that would be really old."

Presley also gave her advice: "He said, 'You have a decent voice. Why don't you take singing lessons and maybe, you know, get in a band or learn to be a singer?'"

Because the King is the King, Peterson took his advice. She took singing lessons and before long, she was singing in her show. She left the show for Europe and joined a pop band in Italy where she sang.

During her time in Italy, Peterson also appeared in a Fellini film. Eventually, she returned to Los Angeles which led to four and a half years working with the legendary improvisational and sketch comedy troupe, The Groundlings. She worked with the late comedian and "Saturday Night Live" star Phil Hartman and Paul Reubens, alias Pee-Wee Herman.

"It was absolutely invaluable. I'd been toying around with comedy acting for several years before that, but hadn't really gotten an opportunity to study it and think about it and learn more about it," Peterson said. "So The Groundlings was absolutely the best place I could have found myself. I am terrible at remembering lines that were just absolutely awful at memorizing, so I thought, Oh, this is fantastic, you just make it up as you go along."

In 1981, Peterson auditioned for a gig as the hostess of a weekend horror show on the local Los Angeles TV station KHJ.

"I think I was able to get the part because of my improv background, because the director really did want somebody who was sexy but also funny, and that wasn't that in demand back in those days," Peterson said. "So I think that the comedy improv lessons paid off in a big way for that interview. And obviously, I got it because here I am 40 years later, still doing it."

Peterson seems to be very proud of the fact that she became a pop culture icon later in life.

She was 30 when she started portraying Elvira, which she jokes is over the hill for women in Hollywood. And since no one would represent her because of your age, she's always declined to have an agent. One could argue Peterson has been subverting the patriarchy for her entire career.

"That would be a nice way to look at it," Peterson said. "I was able to get around not having an agent and just doing things more the way I wanted to do them, how I saw them. And I think that part is very similar to the character of Elvira because she pretty much gets herself into messes all the time. But then she gets herself out. She doesn't need anybody's help, especially a man."

In "Yours Cruelly, Elvira," Peterson reveals she's been in a 19-year relationship with Teresa Wierson, also known as "T."  Why did she want to disclose this information?

"Well, I wanted to talk about everything in my life," she said. "And I just turned 70 years old, and it's like, 'OK, if I don't talk about this stuff now, when am I going to talk about it?' But I've always kept my private life very private because I feel I'm protecting a character. It's not me. If it was just me, the actress going out and doing roles on TV or in films, I'd tell people what my background was. But Elvira is a very well known straight horndog."

"And I didn't want to inflict my personal life on her when I was married," she continued. "I kept that quiet because I don't think people wanted to look at Elvira and think, 'Oh yeah, she's actually at home with her husband and changing diapers on her baby.' I don't think people really wanted to know that. So the same thing with my relationship now. I just didn't want to have that, nor have any reflection on be any reflection on the Elvira character."