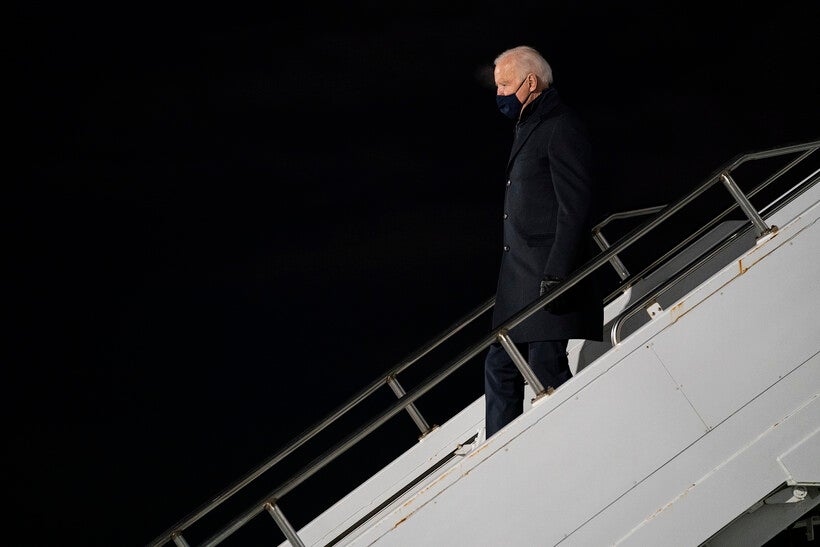 President Joe Biden said by the end of July there will be more than 600 million doses of the coronavirus vaccine, and anyone who wants to be vaccinated, will be.

Biden spoke to about 50 people at the Pabst Theater in downtown Milwaukee Tuesday during a CNN town hall-style meeting. Biden chose Wisconsin as his first official trip as president beyond his home state of Delaware.

The White House told governors Tuesday they could expect their biggest boost yet in the coronavirus vaccine this week.

In Wisconsin, nearly 1 million people have been vaccinated. But there are still several questions from local and state leaders about how the vaccine is allocated. And there are continued disparities in the rollout of the vaccine. State numbers show 11.7 percent of white people have received at least their first dose of the COVID-19 vaccine compared to just 3.4 percent of Black people.

When asked about the disparities, Biden laid out several plans, including providing Federally Qualified Health Centers, that typically treat people without health insurance, with 1 million doses; making sure neighborhood pharmacies have the vaccine; and establishing mobile clinics to be dispatched in communities of color. Biden also said he's committed to spending $1 billion on public education, so people can learn about the vaccine and how to get it.

"The biggest part of it is access, physical access," Biden said. "We inherited a circumstance here, where — and we did a lot in the first two weeks — there weren't many vaccinators. You didn't know where you could get a vaccine put in your arm."

During the 70-minute event hosted by CNN's Anderson Cooper, Biden focused heavily on his COVID-19 relief bill and the economy. Since being sworn in on Jan. 20, the president has been focused on addressing the pandemic and passing the $1.9 trillion relief bill, which he said would create 7 million jobs this year.

In Biden's first weeks as president, he has signed more than 50 executive orders, many of which have addressed the pandemic, immigration and equality. Executive orders include imposing a mask mandate on federal property, ramping up vaccination supplies and requiring international travelers to provide proof of negative COVID-19 tests prior to traveling to the U.S.

And while the president has dedicated himself to finding solutions to the pandemic, he said he can't predict when it will end.

"It's a high probability that the vaccinations that are available today, the ability to continue to spread the disease will diminish considerably because of herd immunity," Biden said. "If that works that way, then by next Christmas, I think we'll be in a very different circumstance than we are today. And a year from now, when it's 22-below-zero here, there will be significantly fewer people here having to socially distance, having to wear a mask, but I don't know."

Since entering office, Biden has opted for virtual events and television interviews to sell his plan, and initially his aides expressed caution about traveling beyond Washington due to the pandemic. But the audience at the Pabst was by invitation-only and there were less than 100 people inside the theater — Democrats, Republicans and independents included.

On Tuesday, more than 20 buildings and landmarks throughout downtown Milwaukee displayed red, white and blue lighting to welcome the president.

Milwaukee Mayor Tom Barrett, a Democrat, said he’s honored Biden chose Milwaukee as his first trip as president. Milwaukee was chosen to host the 2020 Democratic National Convention, but the city was nearly empty during event, which was converted to a virtual nominating convention because of the pandemic.

"I'm hoping I will have an opportunity to thank him for his aid to cities and states," Barrett said earlier this week, adding that he was pleased to see Biden's call on Congress to institute "commonsense gun law reforms," including widespread firearm sales background checks and a ban on assault weapons.

Milwaukee had the deadliest year in history in 2020, with a record number of homicides, suicides and drug deaths.

"It’s good to have a partner in the White House I feel comfortable with to help us address these issues," Barrett said.

The pandemic is one of the reasons for the spike in crime in Milwaukee and across the United States. But so is poverty.

On Tuesday, Biden extended a ban on housing foreclosures to June 30, to help homeowners struggling during the pandemic.

The moratorium on foreclosures of federally guaranteed mortgages had been set to expire on March 31. U.S. Census Bureau figures show that almost 12 percent of homeowners with mortgages were late on their payments.

Biden also talked about education, saying within his first 100 days in office, he would like all kindergarten through eighth grade students to be back in school. Those schools are easiest to open, and not being open has had the greatest impact on children and families, Biden said.

When asked about making college free and student loan forgiveness, Biden said not all college educations would be free under his plans. The president said he would like to make community college free, that would cost $9 billion. He also wants free education for children from families making under $125,000 a year who go to state-owned universities.

Prior to Biden's visit, Mark Jefferson, executive director of the Republican Party of Wisconsin, criticized the president's first few weeks in office.

"President Biden pulled a bait and switch on Wisconsinites. After disingenuously calling for unity, his 40+ executive orders prove that he wants to enact a liberal wish list — not work across the aisle," Jefferson wrote in a statement. "President Biden should only visit Wisconsin if he plans to announce that he is reversing his job-crushing cancellation of the Keystone pipeline and calling for schools to follow the science and actually reopen."