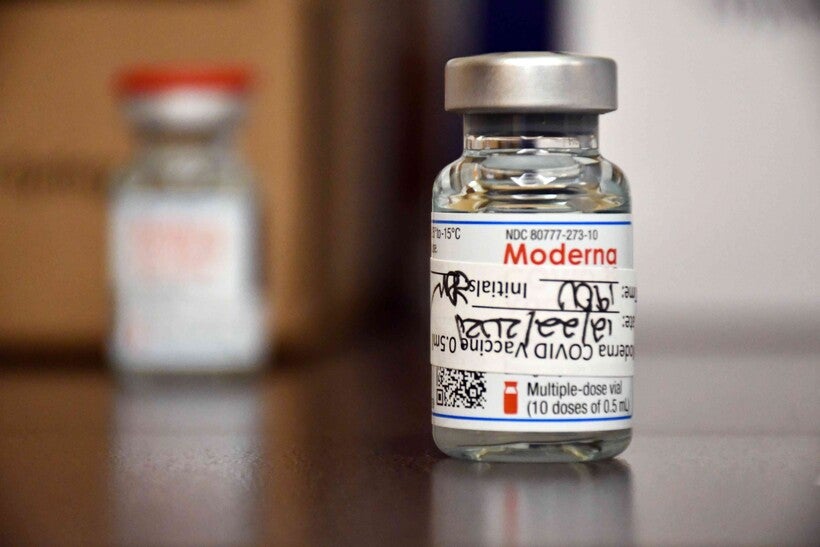 A vial of the Moderna vaccine that was administered to hospital staff at Wausau Aspirus Hospital on Dec. 22, 2020. Photo courtesy of Aspirus

White Wisconsinites Are Most Likely To Be Vaccinated For COVID-19. Here's How Officials Aim To Change That

Black And Hispanic Residents Are Least Likely To Be Vaccinated
By Megan Hart
Share:

Health officials in Wisconsin have released more information about who is — and who isn't — receiving the COVID-19 vaccine.

Still, the data shows white Wisconsinites are most likely to have gotten one or both shots. Frontline health care workers were among the first to receive the vaccine. That group is predominantly white, according to DHS deputy Secretary Julie Willems Van Dijk. Moving forward, the state needs to look for ways to diversify that workforce, she said.

"We have a lot of work to do in Wisconsin to receive equitable vaccine distribution and uptake and even more work to do to achieve equitable health outcomes beyond vaccination. It is work we are committed to doing and this is a start," Willems Van Dijk said.

Groups Least Vaccinated Are Most Affected By Coronavirus

Sarah Francois is the director of fund development and marketing for Progressive Community Health Centers in Milwaukee. Recently, the nonprofit community health center has received all the vaccine doses it has ordered, she said.

"It’s a massive public health undertaking, and so obviously everybody wants it to work perfectly straight out of the gate, but it doesn’t always happen that way, so I think we’ve been pleased with the progress that’s been made thus far," Francois said.

Progressive began vaccinating patients 65 and older a couple of weeks ago. During the first week, every patient with a vaccination appointment showed up.

"I think that just speaks to the fact that patients are really wanting it," she said. "We were thrilled and actually amazed that 100 percent of the people showed up, because that’s not very typical for any health care setting, but certainly not for an FQHC."

Progressive began reaching out this week to community members 65 and older who weren't existing patients, Francois said. She said she believes community health centers will play an important role in vaccinating the uninsured as more groups become eligible.

The city of Milwaukee held a town hall meeting on Wednesday to discuss vaccination efforts. Like the state, the city is working to equitably distribute the vaccine, Milwaukee’s interim health commissioner Marlaina Jackson said. The city is preparing to organize mobile clinics that will visit communities where individuals might lack access to health care or transportation, she said, adding that the pandemic has exposed the racial inequities in health care systems.

At the town hall, officials also spent time debunking vaccine myths. Data from across the country shows some Black adults may be hesitant to seek out vaccination due to a fraught relationship with the health care system.

Nurse Julia Means, a member of the city’s Board of Health, has received the vaccine herself and given the shot to hundreds, she said.

"I tell people they need to get their faith and their facts together and come and get this shot," she said.

Iron and Lafayette counties have achieved the highest vaccination rates so far — more than 17.5 percent — according to new data from DHS. On Thursday, the agency began providing vaccination data by county, in addition to race, ethnicity and gender.

Rural counties with hospitals — and therefore a large number of health care workers — have some of the highest vaccination rates in the state, while those without a hospital have some of the lowest, officials pointed out.

In Milwaukee County, just over 8 percent of residents had received an initial dose of vaccine as of Thursday.

The low number has pushed the mayors of several cities in Milwaukee County to ask DHS how the vaccine allocation formula works.

First, the county is fairly small geographically, so many Milwaukee County health care workers might live in neighboring counties. Additionally, some large health care groups are based in Milwaukee County but also operate in other regions where they send vaccine. Initially, DHS considered shipments to those groups as shipments intended for Milwaukee County, but it has adjusted that process, Willems Van Dijk said.