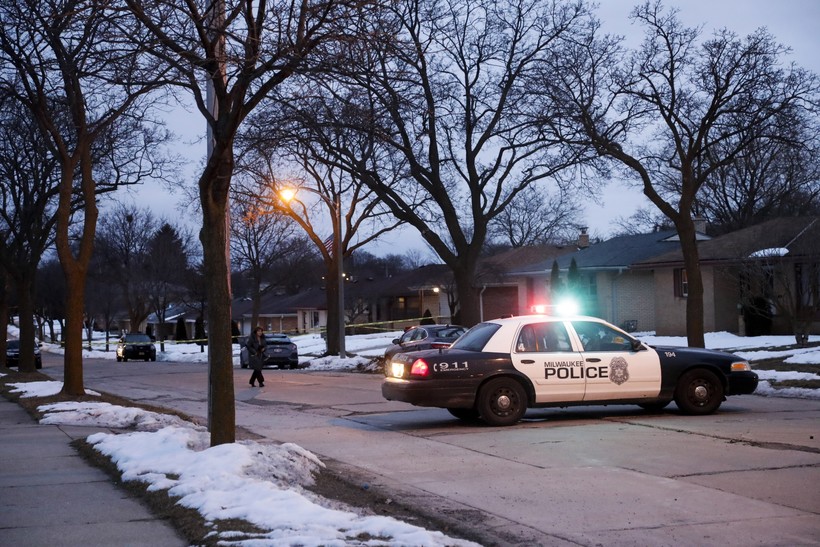 Police are seen outside of a house near Potomac and Courtland after a shooting at Molson Coors, Wednesday Feb. 26, 2020, in Milwaukee. AP Photo/Morry Gash

Milwaukee Ends 2020 With More Than 100 Percent More Homicides Than Year Before
By Corrinne Hess
Share:

It was in the 4100 block of West Burleigh Street. The 30-year-old victim was shot just after midnight in the abdomen and right thigh.

Alerts like this come across Barrett’s phone daily. Especially since the pandemic began. Milwaukee doubled the number of homicides in 2020 than 2019, ending the year with 193 killings.

"What this message doesn’t tell you is this individual is someone’s son, is someone’s brother, might be someone’s husband," Barrett said at a press conference Friday. "When we talk about the statistics, what we don’t recognize is that every one of these messages that I get is a person who suffered."

Barrett and city leaders announced Friday they were recommitting to addressing violence as a public health crisis in 2021.

In addition to a historic year for homicides in Milwaukee, 2020 also marked historic gun violence, with 700 people shot in the city. Milwaukee also experienced an unprecedented number of mass shootings, beginning with the Molson Coors shooting in February and deaths resulting from domestic violence, drug overdoses and suicides.

Milwaukee isn't alone. In large cities across the country violence grew last year. According to The Trace, a nonprofit news organization dedicated to reporting on gun violence, cities saw more violence because of the pandemic. But Milwaukee was the worst among its peers, with a 101 percent increase.

Last year, at a similar press conference, the same group of Milwaukee officials celebrated a four-year stretch of crime reduction from 2016 to 2020, including two consecutive years of fewer than 100 homicides.

Barrett said once stay-at-home orders were in place in March, economic pressures and the tension that comes from not being able to circulate in the community led some to domestic and gun violence.

The city plans to increase funding to expand its domestic violence prevention efforts and the 414 LIFE program to additional areas of the city. The program pairs volunteers from the community to support gunshot survivors and mediate conflicts.

Reggie Moore, injury and violence prevention director for the City of Milwaukee, said nothing is harder than having to look into the eyes of someone who has lost a person to gun violence.

"Seven-hundred people (shot), are three plane crashes, if that is not a state of emergency, I don’t know what is," Moore said. "This is something that we need to respond to with the same level of focus that we have as the COVID-19 pandemic."

Moore said he believes 2021 can be better than last year, but it will take a collective commitment.

"Ultimately, we saw the results to that lack of access in so many horrible, horrible ways," Parish said. "Those systems are exceptionally important. Realize the value in human interaction. Prevention starts with all of us, and it can start with all of you."

"There is no way to describe what it’s like to spend hours operating on someone shot eight, 10, 15 times, sweating through our own gowns and leaving the OR covered in our own patient’s blood only to have to tell their loved ones that their child, parent or friend is dead or will never walk again," Milia said. "The amount of physical damage we see only tells half the story."