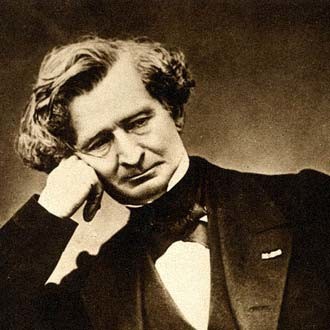 It was the meeting of two great composers -- Hector Berlioz and Luigi Cherubini -- and it's a wonder no one was hurt.

In his memoirs Berlioz relates that Cherubini issued an order that men and women were to enter the Paris Conservatory from opposite ends of the building. Unaware of the order, Berlioz went to the library one morning and entered the courtyard through the newly designated female door. Suddenly he found himself face to face with a servant who commanded him to turn back and enter through the other door. Berlioz dismissed the idea as absurd and continued on to the library.

Cherubini came into the room trembling with rage. "So you are the man who dares to come in by the door I have forbidden you to enter," he said.

Berlioz explained that he was unaware of the order and would obey it next time.

"Next time! Next time!" Cherubini flared. "What are you doing here?" "As you can see, sir, I'm studying Gluck's scores."

"And what are Gluck's scores to you, and who allows you to enter the library?"

Berlioz was starting to lose his temper. "Gluck's music is the most magnificent I know, and I need no one's permission to come here and study This library is open to the public from ten till three and I have a right to use it."

"What-what is your name?"

Berlioz was by now white with anger. "Sir, maybe you'll hear my name someday--but you won't hear it now."

"Seize him," Cherubini commanded his servant. "Seize him and take him away to prison!"

Then, to everyone's amazement, Cherubini and his servant chased Berlioz around the table--knocking over stools and reading desks. But Berlioz broke free and ran off, calling out, "You shall have neither me nor my name, and I'll soon be back to study Gluck's scores again!" It was a meeting of composers, yes, but a meeting of minds it was not.