Bill Would Restore Funding To Original Levels By 2026
By Mary Kate McCoy
Share:

The GLRI, founded in 2010 as a way for federal funds to pay for cleanup efforts around the Great Lakes, saw a nearly $200 million drop in funding after its first year.

The bill would increase spending from $300 million to $375 million in 2022, with increases in funding of $25 million each year until 2026, when it reaches the original recommendation of $475 million.

Judith Siers-Poission: Can you give us a Great Lakes Restoration Initiative 101, what does this program do?

Tammy Baldwin: This program allows local projects that are partnerships between nonprofit conservancy groups and local governments ... to clean up our Great Lakes. There's lots of different projects that are undertaken to do just that, whether it's trying to rid the tributaries of toxic pollutants or cleaning up the shore land, combating invasive species and restoring polluted sites to protect and preserve our Great Lakes for generations to come.

JSP: This particular version of the initiative would expand the funding significantly. What are some of the things that you hope will be able to be funded?

TB: The measure gradually increases the funding over the next several years. It is really teamwork among the Great Lakes senators and the Great Lakes members of the House of Representatives. Every state submits more projects than can possibly be funded given the financial constraints of this program right now. But we'll be able to clean up more polluted sites, look at having a larger scale effort to combat invasive species.

I think about the damage that something like the Asian carp might have if they ever get into our Great Lakes water basin. We want to be way ahead of that threat because it would be devastating to our Great Lakes environment and economy. But there are things that are already pests like zebra mussels and other invasive species.

Also we are seeing greater frequency of things like algal blooms. I know that there was a focus on algal blooms in the bay in Green Bay. This is something that is harmful to health, prevents people from recreating in the Great Lakes (like) swimming (and) fishing. And the more we see that, the bigger impact it has both on our overall environment and our state's economy.

JSP: President Donald Trump has tried to cut funding for the program three times. Do you have a sense of whether the administration is going to be open to preserving current levels of funding, let alone this increase?

I think that perhaps this is one of the times where it's an advantage that the upper Midwest and the Great Lakes states are so politically impactful and he may be eyeing that or may have simply just begun to understand that these are absolutely essential initiatives to the greatest freshwater source in the world.

JSP: Some have made the case that it would be better to put this funding toward a few very large, perhaps more impactful projects, instead of dividing it up among hundreds of different projects every year. How would you respond to that?

TB: The biggest bang for the buck is actually looking at, across the Great Lakes Basin, all of the sources of contaminants and pollution, the factors that are resulting in more frequent algal blooms. And there are a couple of major projects that I think should be reviewed for Great Lakes Restoration Initiative funding.

In particular, I would look at the effort in Illinois to prevent Asian carp from entering the Great Lakes Basin. We have, all of us no, matter what Great Lakes state we’re from, been working together to try to make sure that that never happens and that is something that's going to require a larger engineering monetary commitment.

But by-and-large I think that it's much more cost effective to be spreading this funding out across many states. It is one of those programs that leverages additional funding and that is always exciting when a federal tax dollar can leverage private investment, volunteer labor on these projects and nonprofit organizations really oftentimes in the lead. 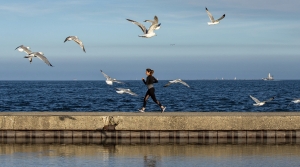 New bipartisan legislation in Congress aims to increase funding for the Great Lakes Restoration Initiative. We talk to U.S. Senator Tammy Baldwin, who’s one of five lawmakers to introduce the bill.