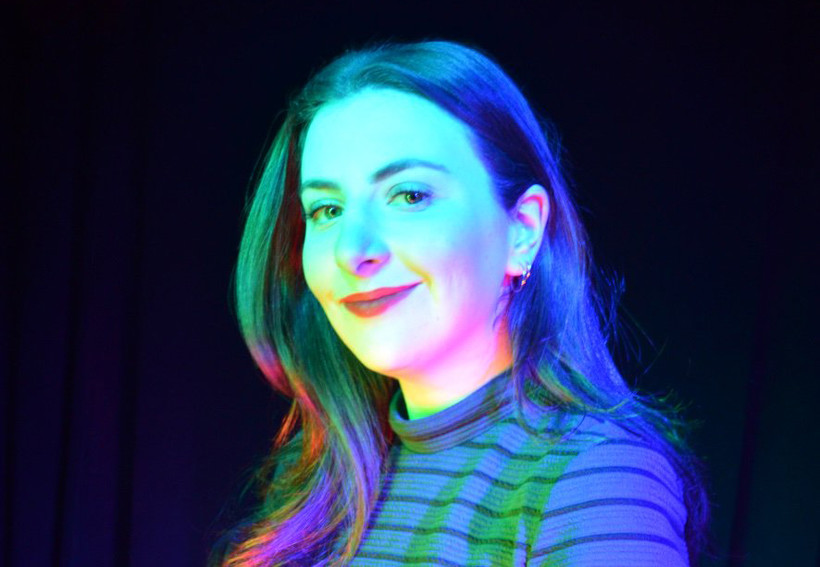 Schwartz Gives The Backstory Of Who @GuyInYourMFA Is
By Doug Gordon
Share:

Dana Schwartz is host of the history podcast, "Noble Blood," and one of the funniest people on Twitter.

Besides her very funny personal Twitter account, Schwartz also has two parody Twitter accounts — @DystopianYA and @GuyInYourMFA. Now Schwartz has turned her @GuyinYourMFA account into a book called "The White Man's Guide to White Male Writers of the Western Canon."

"The truth is that I really didn’t think that I was going to write a 'GuyInYourMFA' book," Schwartz told WPR's "BETA." "I started that parody Twitter account when I was a senior in college. And it was just sort of this cathartic way to get out my frustrations with sort of the condescension of the lit majors at my undergrad university and to just put jokes out into the world on Twitter, which was not something I had any experience with it."

"And I had thought at the time about turning it into a book but it turned out to be really hard to take sort of that, not to say it’s one joke, but definitely one-note character, and expand his voice over an entire book. It got just genuinely tiresome," Schwartz continued.

@GuyInYourMFA is Schwartz's satirical take on the cocky, arrogant guy in a Master of Fine Arts writing class who is more than happy to mansplain the most important white male writers.

Schwartz attended Brown University from 2011 to 2015. She was originally on a pre-med and public policy track, but she decided to become a writer.

She said that over the years, she was nagged by the suspicion that she could take the @GuyInYourMFA character and use his voice to make jokes about various literary figures.

"And once I had that idea about sort of using him as your tour guide to white male writers, I just couldn’t let go of it," she said. "I was like how fun to have like a CliffsNotes version of all the high-art, literary writers and then have this horrible, infuriating tour guide. And I also became friends with this incredible illustrator, Jason Katzenstein, who did cartoons throughout the book. And I think once we joined up and had this idea, it just became too fun not to do."

Hey high school sophomores, here’s the summary of The Great Gatsby from ‘The White Man’s Guide to White Male Writers of the Western Canon.’ Now you don’t have to read it. You’re welcome! https://t.co/2NWqqrcVDS pic.twitter.com/xnxbvYbzGW

So can Schwartz fill us in on @GuyInYourMFA's backstory — his name, his education and his worldview?

"Well, he doesn’t have a name particularly. I think because he’s sort of the everyman. He’s both the guy in your writing workshop, maybe the professor, probably the barista at your local Starbucks, almost certainly the internet at the literary magazine you submitted your story to," she said. "But if he had to have a name, it would probably be Jonathan for semi-obvious reasons. It just feels right. He went to an Ivy League undergraduate liberal arts school. May or may not have been the one I attended. And he attended a prestigious MFA for Creative Writing, whether it’s Iowa or Cornell or Brown. Fill in the blanks for whichever one intimidates you the most."

"I think (I) sort of took all of my feelings of insecurity and gave them a face. And Guy is that face," Schwartz continued. "I think every writer has a little bit of 'GuyinyourMFA' on the inside. Like he’s also, you know, a bit of me. He’s all of my pretentious, terrible ideas when I’m like, 'Ooh, what if I did a modern-day retelling of 'Hamlet,' but gritty?' And then I have to take a step back and be like, 'Nope, that’s not a good idea, Dana.' You know, he’s a lot of bluster but it comes from a place of vulnerability."

We asked Schwartz about some of the writers she profiles in the book, including David Foster Wallace.

"I think he’s an incredible writer, and I think the legacy of his early death definitely sort of exalted him to this high status of sort of underground hero," Schwartz said. "I was less interested in writing a legitimate analysis or criticism of his work. And I was more interested in gently poking fun at the people who see his name as synonymous with high art. You know, the people who use his name to prove that they’re well-read or sophisticated.

"Because the truth is if you’ve ever opened 'Infinite Jest,' that is a tome of a book¹," she continued. "And so I think that the people who read it like to wear it as a badge of honor. And so that’s sort of what I like to poke fun at: this idea that just by reading a certain book, you’re better than other people, which that’s just not a good way to live life."

Schwartz recently participated in an AMA ("Ask Me Anything") on Reddit. There was one question from the AMA that she thought was important, and so she posted it on Twitter:

Here's one question from my AMA that I think is important.

Yes, I'm white. But I think calling out white privilege and making fun of it is far better than the alternative of..... doing nothing. https://t.co/aaaGSEWzyC pic.twitter.com/FN8qaLl6Qp

"The thing is, yes, I am a white person making fun of white male writers. But if I can’t make fun of white male writers, then who can I make fun of?" Schwartz said. "If I can’t make fun of Shakespeare and Faulkner and the pretentious bro from Brooklyn who loves them, then what is left for me to mock and make gentle jokes about? Anyone who reads this book knows that it is a pretty gentle satire that both celebrates these writers at the same time I’m making fun slightly of like the pretentious person who dismisses everyone else."

"It’s worth pointing out that the people who defined the Western canon or the high literary canon decades ago were all white men who chose and exalted books that celebrate their own perspective and point of view," she said. "And whether they did that consciously or unconsciously, the books they chose are ones that resonated with them probably because they related to their experiences. And I think it shouldn’t be considered a crazy political or subversive act to say, 'Hey, maybe now that it’s 2019, we can point that out and make jokes about it.'"

Since "BETA" is a big fan of thought experiments, we came up with a literary thought experiment for Schwartz: What if her book becomes a huge best-seller, has a lot of cultural influence and were to lead to her being put in charge of the American Library Association or some such governing body that would give her the power to create a new Western canon of literature? What would this new Dana Schwarz Western canon look like?

"Oh my God! That’s a great question," she said. "I mean, the truth is I would definitely have some of these same writers in it. I would have, you know, William Shakespeare obviously, Kurt Vonnegut, Kafka, Fitzgerald, Tolstoy. But then I would also want to include some women who’ve been maybe overlooked or forgotten obviously — Jane Austen, the Brontes who aren’t overlooked, but then authors like Muriel Spark, Patricia Highsmith, Zadie Smith.

"I think everyone should read 'White Teeth.' It’s one of my absolute favorite books. And then there are some really great books that came out recently that I would add to the canon. I would add 'Fates and Furies' by Lauren Groff, which came out within the decade. I’m calling my shot and saying that that should be a canonical book. She’s an incredible writer."