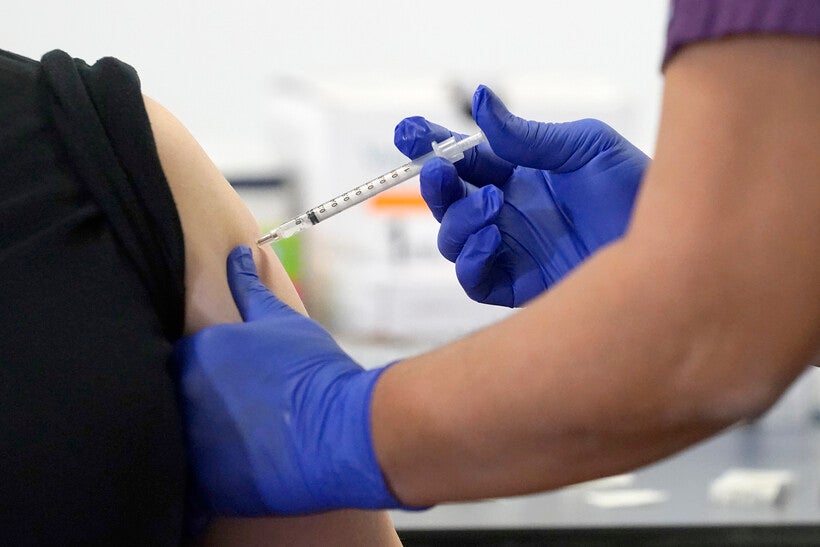 A nurse at Saint Anthony Hospital administers Wednesday, Dec. 23, 2020, the first of the two Pfizer-BioNTech COVID-19 vaccinations to a hospital worker at the facility in Chicago.Charles Rex Arbogast/AP Photo

Residents at assisted living facilities in Wisconsin could begin receiving the COVID-19 vaccine by Jan. 25, according to state health officials.

This week, the state’s Department of Health Services (DHS) notified the Centers for Disease Control and Prevention that Wisconsin is ready to begin vaccinating assisted living residents, according to Deputy Secretary Julie Willems Van Dijk.

Tim Burns is program director at Goodlife Assisted Living, which operates four assisted living communities in Fond du Lac, Oshkosh and Omro. He hasn’t heard any hesitation from residents when it comes to getting the vaccine, he said.

"I think all of our guests will be interested in getting it. We've been in a lockdown since June, and it's been very challenging for our families and our residents," he said.

With the vaccine, Burns hopes it won’t be too much longer before normal visits can resume and residents can become more active in the community, he said. Burns received the vaccine Friday from the Fond du Lac County Health Department, and he said it felt like a flu shot. He expects many staff members will choose to get vaccinated, but it’s not required.

Residents and workers at skilled nursing and assisted living facilities are both included in phase 1a of the state’s vaccination plan, but health officials decided to further prioritize nursing homes, said Rick Abrams, president and CEO of the Wisconsin Health Care Association/Wisconsin Center for Assisted Living.

More than half of states have already begun vaccinating assisted living residents, according to data from CVS. And this week, an industry executive told the Milwaukee Journal Sentinel that it’s frustrating Wisconsin is behind other states when it comes to vaccinating the group.

But Abrams favors Wisconsin’s more measured approach. There are 356 Wisconsin nursing homes participating in the federal pharmacy partnership program, which sees pharmacists from Walgreens and CVS set up on-site vaccine clinics, according to DHS. In contrast, more than 4,000 assisted living facilities across the state are eligible to participate, Abrams said.

"Quite frankly, I did not expect the assisted living component of 1a to begin until the end of the month, so I was gratified when I learned yesterday that the department gave the CDC the green light to begin the rollout process,” he said.

About half the state’s nursing homes, where residents require round the clock nurse supervision, have already hosted their first vaccine clinics for residents and staff members. Patty Emberson, director of nursing at New Glarus Home, said the facility had about a week’s notice ahead of their vaccine clinic on Dec. 28 — the first day of nursing home vaccinations in Wisconsin.

"It was also Walgreens' first clinic that day, so neither one of us really knew what to expect, but the day was very smooth. No big hiccups, and we're excited to get our second dose," she said.

Demand for the vaccine has varied among nursing home staffs, Abrams said. At some facilities, 70 percent of workers have chosen to be vaccinated. At others, the number is as low as 30 percent. He believes uptake among nursing home employees will increase as workers see their colleagues get it without serious side effects, he said.

Willems Van Dijk said supply has been the limiting factor in the vaccine’s rollout in Wisconsin. Currently, the state is receiving 70,000 doses per week from the federal government, she said.