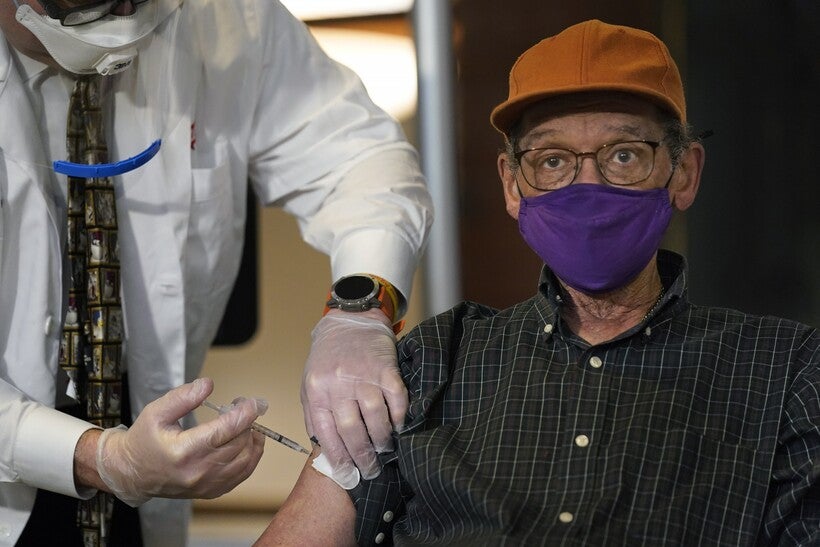 In this Dec. 21, 2020 file photo, Kelley Dixon, 78, is vaccinated against COVID-19 at his residence in The Hebrew Home in Riverdale. An ambitious goal of vaccinating 1 million New York City residents against COVID-19 in January was set Thursday by Mayor Bill de Blasio, who noted that meeting the target would require outside cooperation and the city dramatically increasing access. Seth Wenig/AP Photo

Experts Expect All Of State's 360 Nursing Homes To Receive First Round Of Doses By Jan. 25
By Mary Kate McCoy
Share:

Wisconsin nursing homes are moving quickly on vaccinations after the first shots were administered on Dec. 28.

John Sauer, president and CEO of LeadingAge Wisconsin, expects the first round of residents and staff at over half of the state’s 360 nursing homes to receive the first dose of the Moderna vaccine by Monday.

By Monday Jan. 25, CVS and Walgreens pharmacists — who are distributing the Moderna vaccine to nursing homes and long-term care facilities through a partnership with the federal government — hope to have visited all of the state’s nursing homes for the first round of vaccinations, he said.

Fifty-seven thousand doses of the Moderna vaccine have been set aside for Wisconsin’s long-term care facility staff and residents.

New Glarus Home was among the first to receive the vaccine in Wisconsin on Dec. 28. Director of Nursing Patty Emberson said 70 out of 74 residents and 70 out of 120 staff received the first dose.

With only several days notice before receiving the vaccine, there was minimal time to offer education to the staff about the vaccine, she said.

By the time Walgreens staff return to give the second dose on Jan. 25, Emberson expects more of the staff will be ready for the vaccine after they see there were no side effects among those who did receive the vaccine.

"We all felt fine the next day. So hopefully that will be a little bit of encouragement to them and hopefully they've had a chance to talk to their primary physicians," she said. "It was also Walgreens' first clinic that day, so neither one of us really knew what to expect, but the day was very smooth. No big hiccups and we're excited to get our second dose."

At Luther Manor, a senior community in Wauwatosa, about 60 percent of the staff received the vaccine Tuesday — a week earlier than they were told to expect it, according to president and CEO Stephanie Chedid.

"I think it was a terrific success given how quickly we had to deploy this," she said. "We're hoping that the staff members who were reluctant to get it in the first round step forward and make sure that they get vaccinated (in the next round)."

Hope Senior Living in Lomira will receive its first round of vaccinations Tuesday, Jan. 12. Administrator Julia Schramek said the first clinic will be for residents, many of whom have already consented to getting the vaccine.

"I've had quite a few (residents) ask me, when are we getting those shots?" she said. "They're pretty excited, they're ready for it."

They’re eager for life to return to normal, Schramek said, but she cautioned things won’t go back to normal right away, and the community still needs to be careful and get vaccinated when they’re able to.

"We understand that it's not going to happen immediately. It's going to take some time, and we really need the community to get on board too," she said. "We'll still keep following our guidance from the CDC and DHS and slowly but surely, hopefully things will start to get back to that normal soon."

Hope Senior Living will receive its second dose Tuesday, Feb. 9, following that, those in assisted living will be added to the list.

There are about 28,000 long-term care residents, and at least that many staff, in Wisconsin, Sauer said.

Nursing home and long term care residents represent about 27 percent of deaths from COVID-19 in Wisconsin, according to the state Department of Health Services. 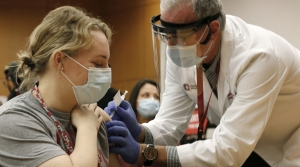 Wisconsin has set aside almost 57,000 doses of the Moderna coronavirus vaccine for nursing home staff and residents. We hear from administrators at an elderly advocacy organization and a senior living facility about those vaccine distribution plans.

What Goes Up Must Come Down — Including A Giant Chinese Rocket Plunging Toward Earth
Grand Jury Indicts Puerto Rican Boxer Félix Verdejo In Death Of Pregnant Lover
You're Fully Vaccinated! But Do You Need A Booster Shot?
Poldark on Masterpiece
University Place:De-Extinction: Resurrecting Extinct Species