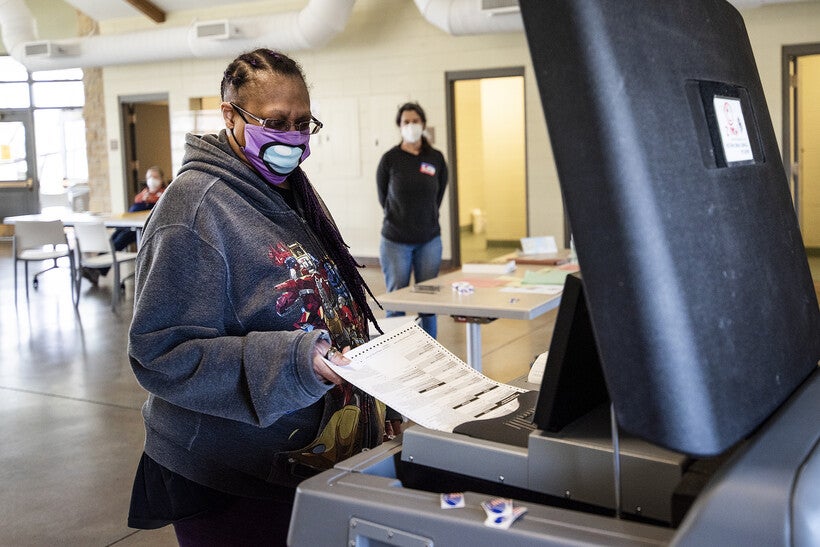 With roughly a month to go before they’re scheduled to adjourn their legislative session, GOP lawmakers are pushing a package of bills that would give themselves more power over elections and put up more obstacles for voting absentee.

Republicans would also ban some of the activities that took place in the 2020 election like private grants to help run elections and absentee ballot applications that were sent to millions of voters across Wisconsin.

Sen. Kathy Bernier, R-Chippewa Falls, is the chair of a Senate election panel that heard hours of testimony Monday on the package of election proposals. She said the steps taken to safely administer elections during a pandemic need to be left in the past.

"During the pandemic, we had an extraordinary situation," Bernier said. "I think it's time to move on past that."

But those changes, critics argue, have a common thread: Most would either put more restrictions on the agency that runs elections or put up more barriers for voters.

Debra Cronmiller, executive director for the League of Women Voters of Wisconsin, spoke against the bills.

"Some make it much harder for voters to apply for and cast an absentee ballot," Cronmiller said. "Some can only be characterized as a power grab by a legislative branch seeking to control elections. Given that none of these proposals would improve elections, they would be a net loss for voters."

The measures come as former President Donald Trump has pressured Republicans to change election laws, falsely asserting that he won swing states like Wisconsin two years ago. In Wisconsin, Assembly Republicans have commissioned an investigation of the 2020 election.

Bernier, a former clerk, has been among the most outspoken Republicans to push back on Trump, but she acknowledged Monday that some of her bills were drafted, in part, to address the concerns of people who don’t trust Wisconsin’s elections.

The GOP plans include some common themes.

More power for the Legislature

The Legislature, which is controlled by large Republican majorities, would gain new powers to block voting funding and policies, including guidance from the federal government.

The Republican bills would make absentee voting more difficult in a variety of ways.

Republicans are also trying to ban private election grants like those distributed in 2020 by the Center for Tech and Civic Life, an organization funded by Facebook CEO Mark Zuckerberg and his wife, Priscilla Chan.

While the organization has said it awarded grants to a total of 221 counties, cities, towns and villages in Wisconsin, the organization spent millions of dollars on grants to Milwaukee, Madison, Green Bay, Kenosha and Racine, the state’s five largest cities.

A group of Republican plaintiffs organized under the name Wisconsin Voters Alliance challenged the grants in court in 2020, arguing they were meant to boost turnout in Democratic strongholds. The group lost cases in both state and federal courts, with a federal judge ruling there was nothing in Wisconsin law that prevented the grants.

Two measures being pushed by Republicans would change that. One, which is part of a larger election bill, would ban private election grants and make it a felony — punishable by up to three-and-a-half years in prison — for anyone to help count or tabulate votes unless they’re a Wisconsin resident who is trained as an election official.

"Why is that fair that somebody can just parachute into Milwaukee with millions of dollars?" said state Sen. Duey Stroebel, R-Saukville, at the hearing on the plan.

Brenda Wood, a lobbyist for the city of Milwaukee, said the city used part of its funding to boost pay for poll workers, and spent more than $1 million on seven high-speed vote tabulators that let the city complete its count by 3 a.m. the morning after Election Day. She said the city needed that money because state shared revenue payments to Milwaukee have decreased over the past couple decades.

"It's not really responsible to not allow us to find alternate sources of funding," Wood said.

Gov. Tony Evers vetoed a similar measure last year and is all but certain to veto this plan, but another proposal by Republicans would sidestep the governor. It would amend the Wisconsin Constitution to ban private election grants. That measure would need to pass two consecutive sessions of the Legislature and be approved by voters in a statewide election to take effect. That means it would not affect this year's elections, but if approved, it could take effect before the 2024 presidential election.

Republicans would also clarify how residential care facilities and retirement homes should handle voting for residents in future pandemic elections.

Typically, residents in nursing homes and other facilities vote absentee with the help of special voting deputies who are dispatched to the home. When possible, state law calls for two deputies per visit, with one from each party.

In March 2020, the Wisconsin Elections Commission unanimously paused that requirement because of concerns that the deputies could carry COVID-19 to nursing homes, endangering the health of older residents or people with pre-existing conditions.

Republicans have alleged that the change led to some nursing home residents casting votes against their will, but disability rights advocates have pushed back against those claims and no charges have been filed.

One of the GOP election bills would let local clerks appoint "personal care voting assistants" during a public health emergency when entry to nursing homes is restricted. These would be existing employees of the home who undergo training.

At the same time, the plan would make felons out of nursing home employees who "coerce" residents to apply for absentee ballots or register to vote. Employees would also be banned from encouraging residents to vote for a particular candidate. Anyone found guilty could face up to three-and-a-half years in prison.

"The fact that the term 'coercion' is not defined in the bill and carries a strong penalty will likely result in staff not wanting to assist anyone in registering to vote," Stephanie Bloomington, a voter from Sturgeon Bay living with a disability, said.

Right now the board that runs the Wisconsin Elections Commission is explicitly partisan, with three commissioners appointed by Republicans and three appointed by Democrats. That 3-3 split has increasingly led to gridlock at the agency with neither side willing to budge.

Staff at the agency is a different story because lawyers who advise the commission are expected to be nonpartisan under current law. But one of the GOP election bills would change that, requiring the commission be advised by one Republican and one Democratic attorney. GOP lawmakers say this would "guarantee viewpoint diversity" at the commission, and make sure commissioners have someone "advocating for them."

Multiple bills would also strike residents from Wisconsin’s voter list if their registration information conflicts with other government databases, which GOP sponsors say would keep the list current but critics worry could remove people at no fault of their own.

Plans likely headed for veto but could be back

While these bills and others related to elections could pass the Legislature before lawmakers adjourn for the year, Evers is likely to veto the plans.

Asked about the bills at a recent event in Milwaukee, Evers said he supports the Wisconsin Elections Commission as-is and said the current system works.

But if Evers were to lose his reelection bid, his Republican challengers, Kleefisch and former U.S. Senate candidate Kevin Nicholson, have pledged major changes to election laws. Both Republicans have also called for abolishing the Wisconsin Elections Commission altogether.