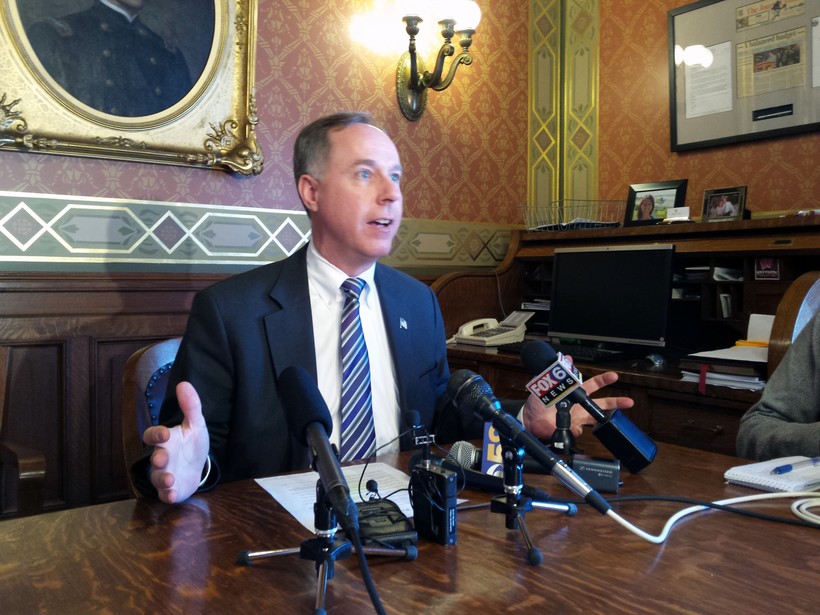 GOP lawmakers have for months countered Democratic arguments for expanding background checks and instating a red-flag law with the possibility of increasing state mental health resources and programs. They have argued that mental health crises are often the root cause of shootings.

However, Assembly Speaker Robin Vos, R-Rochester, said Thursday he believes "throwing more money at the problem" is not the solution to gun violence.

"We have already done a lot on mental health," Vos said. "I think there’s a lot of things that play into what’s happening. It isn’t as simple as snapping our fingers and putting more money into a problem."

GOP lawmakers rolled out a number of mental health-related bills this fall. Those have yet to be voted on in the Assembly.

The state budget also included a number of provisions related to mental health, including increasing funding for community-based mental health treatment programs, increasing how much the state pays for mental health services for individuals on BadgerCare and giving more state support to both the Winnebago Mental Health Institute and Mendota Juvenile Treatment Center.

"An awful lot of these (shootings) come from a young person who’s in an incredibly bad place, either suicidal, lonely, disconnected ... those are things that human beings have to fix, government’s not going to do it," he said.

Gov. Tony Evers said Thursday he thought mental health-related proposals would be a place to find common ground with Republicans.

"Clearly, there's a belief that we have a shortage of people that are able to help kids and their families get through mental health issues," Evers said. "I think we have some areas of agreement there."

Vos said GOP lawmakers will roll out at least one gun-related proposal in 2020. That bill will make changes to penalties on individuals who commit a crime with a weapon, to make sure they are "appropriately punished," he said.

Vos also cast doubt Thursday on whether a new, Republican-backed proposal to legalize medical marijuana in Wisconsin would move forward in the Assembly.

While the plan’s prospects were immediately shut down in the state Senate by its majority leader, sponsors had hoped the bill would get a public hearing in the Assembly.

"I am a supporter of medical marijuana, but we are not going to force this through the process," Vos said. "I want to continue the conversations, I want this to become law, but that is a process that takes time."

Vos said he wants to spend time having discussions with the Senate about what changes they need to see to the plan in order to support it.

"I think a public hearing, frankly, could hurt our chances of moving it forward," he said.

Evers called on Republicans to move forward with the plan, which he characterized as "a step in the right direction."

"We're getting close to having some consensus on the Republican and the Democratic side, so let's get it done," Evers said.

Vos also weighed in on the ongoing legal battle between the state Elections Commission and a conservative advocacy group that could affect roughly 200,000 Wisconsin voters.

According to the Elections Commission, about 209,000 people could be removed from voter rolls as a result of the latest court decision in the case.

Vos argued the issue has been blown out of proportion, because many of those people could register to vote on Election Day. Wisconsin offers same day voter registration.

"To make this red herring argument that hundreds of thousands of people aren’t going to be able to vote ... that’s not how our laws in Wisconsin work," he said. "I think this was made into a political issue to try to divide people."

Critics of the lawsuit say some people may be removed from voter rolls incorrectly and won’t know they need to re-register in order to cast their ballots. In order to register, voters need both a valid ID and proof of residency documents, like a utility bill, a lease or real estate tax bill.

Evers said the legal challenge "was politically motivated to get people off the vote rolls or send a message that it is more difficult to vote than it should be."

"I just think we should be, as a state, encouraging as many people to vote as possible," he said. "And this sends the wrong message."

Editor's note: This story was updated with comments from Gov. Tony Evers.