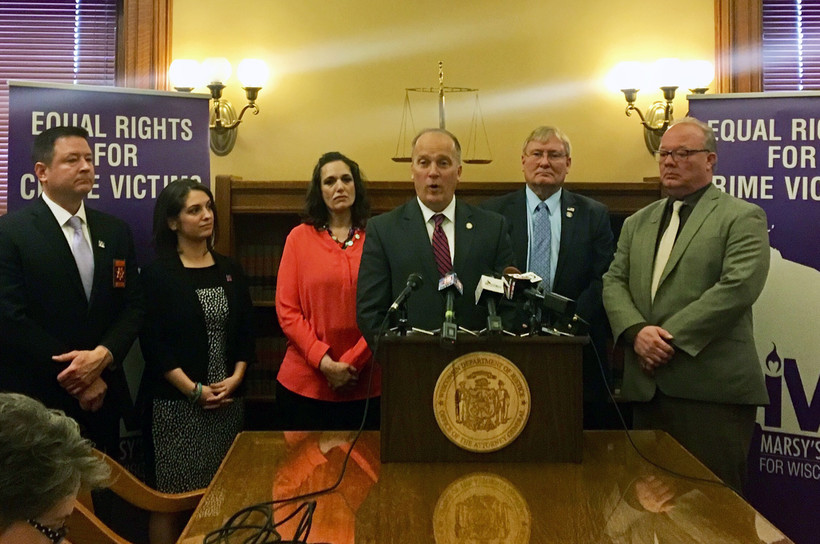 Wisconsin Attorney General Brad Schimel and Republican lawmakers on Tuesday called for an amendment to the state constitution they say will strengthen crime victims' rights.

The proposed amendment, known as Marsy’s Law, would include things such as a victim's right to privacy and due process in the state constitution.

"This constitutional amendment will update our constitution to ensure equal rights for crime victims that are clear, enforceable and permanent," Schimel said in a prepared statement.

Many of the proposed rights are already state law, but advocates say they should have the legal weight of being included in the constitution.

Christina Traub, who was the victim of a violent crime in 2015, said she wanted the same rights her attacker had in court.

"This whole thing that was happening to me, it felt like I wasn’t part of it," Traub said. "Why is it that the man who puts his hands around my neck, looked me in the eye and squeezed as hard as he could, why does this man deserve rights that are backed by the Wisconsin state Constitution and I do not."

One of the provisions in Marsy’s Law would require victims be allowed the right to provide testimony during proceedings related to release, plea, sentencing, adjudication, parole and "any proceeding during which a right of the victim is implicated."

Amendments to the state constitution have to pass two consecutive sessions of the state Legislature, then go to a statewide referendum for voters’ approval.

Sen. Van Wanggaard, R-Racine, and Rep. Todd Novak, R-Dodgeville, are sponsoring the bill in the state Senate and Assembly.

"Our focus needs to be on caring for and protecting those victims, not coddling criminals," Wanggaard said in a statement.

Marsy's Law is named for Marsy Nicholas, who was killed by her ex-boyfriend in California in 1983.