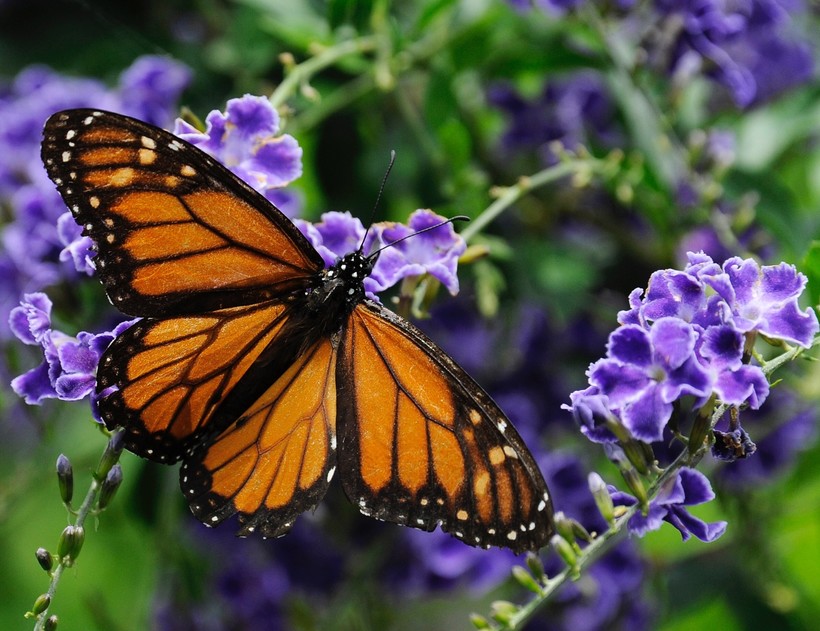 From Fireflies To Butterflies To Spiders, Listen To These Enchanting Songs
By WPR Music Staff
Share:

There’s lots of great music inspired by our summertime companions. The WPR Music Staff has put together a fun list of things to listen to, including some interesting pieces that might be new discoveries for many of us.

When I spot the first firefly of the season, it "sparks joy."

I lived on a retired dairy farm in Green County for many years, and when I saw that very first firefly, it meant that one of nature’s glorious light shows was on the way.

At the height of firefly season, the fields around our home would come alive at dusk, spangled with moving, glowing points of light signaling to each other in search of a mate.

A couple of years ago I encountered a piano piece that captures this display: "Fireflies" by Amy Beach.

Beach was an American composer born in New Hampshire in 1867 – she was a child prodigy and gifted pianist, but after marrying at age 18, she stopped performing publicly except for a couple of annual charity concerts.

Fortunately, Beach continued to compose, and her love of nature shines through some of that music, including "A Hermit Thrush at Eve," which emulates birdsong; "From Grandmother’s Garden," with its movements that include "Morning Glories," "Rosemary," "Honeysuckle" and "The Little Brown Bee."

Amy Beach composed "Fireflies" when she was 25 as part of a set of four piano sketches. Although it’s less than four minutes long, it manages to evoke the insects’ movement, grace and delicacy.

When I hear the piece, I imagine the little fireflies flitting and flashing across the farm fields — and, maybe it’s anthropomorphizing — it feels like Beach’s music bestows a sense of hope upon them.

As a boy, monarch butterflies were my constant summer companion, as numerous as the blades of grass it seemed. What I didn’t know then is what an amazing life these butterflies have, migrating up to 3,000 miles every year to places like Mexico or California where they spend the winter. It takes generations of Monarch butterflies to make the annual round trip back to Wisconsin and points north.

But these butterflies are facing extinction, due to climate change, pesticide use and habitat loss.

Cris Plata, a Madison-area musician who performed at this year’s Simply Folk Shindig, has a wonderful song that celebrates these orange, black and white winged friends, "Goodbye, Butterfly," written by his wife, Ann Plata.

Incorporating elements of music from his Mexican heritage, Plata celebrates the Monarch and their annual journey south. The song appears on his album, "Migration Road," and in the liner notes to the album, Plata writes that the butterflies, "return every year to central Mexico highlands where they’re welcomed back on All Souls Day. It’s done Mexican style with acoustic guitars and a trumpet."

" ... I saw 16 swans. One of the greatest experiences of my life. Oh God, what beauty: they circled over me for a long time. Disappeared into the sun like a glittering silver ribbon. Their cries were of the same melancholy timbre as those of cranes, but without any tremolo ... Nature’s mystery and life’s melancholy!"

A quotation attributed to Finnish composer Jean Sibelius written in his diary in 1915.

This experience is thought to have been the inspiration for the soaring melody which is the heart of the final movement of his fifth symphony. He had a special gift for translating landscape and nature into sound.

"I’ve got a new friend, all right. But what a gamble friendship is! Charlotte is fierce, brutal, scheming, bloodthirsty — everything I don’t like. How can I learn to like her, even though she is pretty and, of course, clever?"

You know the conundrum: one of the kindest and smartest characters from one of the best books for children has the potential to emerge unannounced from the visor in your car and send you into a screaming frenzy trying to keep it from dropping into your lap.

Our brains are full of facts about how much we need spiders, and yet they still make many of us uneasy, to say the least. Perhaps a bit of music can help you face the eight-legged creature that has taken up residence in your shower.

At the turn of the 20th century, French composer Albert Roussel was named counterpoint professor at the Schola Cantorum, which had been established in Paris by musicians who admired German composers like Wagner. Roussel, however, became interested in Impressionist music, and his ballet "The Spider's Feast" adds those imaginative washes of color to a sturdy symphonic framework.

This 1913 ballet is set in a garden, where ants wrestle with flower petals, a butterfly catches a breeze or two, and various insects go about their business, only to be caught in the spider's web. In the complete ballet, the moments that depict the starker aspects of the food chain in action have, in the composer's words, appropriately "plaintive" or "violent" music, but the Symphonic Fragments give us a gentler picture of the wilderness that can be found in our own backyards.

From the continent of Africa to North America, and South America to the island of Cuba in the Caribbean, come stories about cultural celebration, religious traditions, as well those grounded in social and ethical norms.

Storytelling avenues appear in Aesop's Fables, "The People Could Fly: American Black Folktales" by Virginia Hamilton, the canon of North American Afrocentric folk, jazz and popular music. These and other platforms have historically been used to convey many messages. They include ethical pathways, ideas on social constructs and education for both adults and children.

Some of these narratives were "passed down" orally from one generation to the next and re-imagined in "songs" that offer musical treatments of old stories purely for the delight of children. One such tale dates back hundreds of years. It's called "Anancy," varied stories about a mischievous spider who uses its wits to trick and outsmart other animals.

Many Anancy stories traveled with enslaved Africans to the Caribbean. As it goes, Anancy loves to torment other animals, especially those that are larger and stronger like tigers who routinely have food that "Little Anancy" wants and in the end, gets.

Stories about Anancy still thrive throughout the Caribbean today. Over the years, I've listened to several animal tales that give life, character and a "voice" to even the smallest creatures on earth. This one from Trinidad is among my favorites. What's more, there are annual festivals in the Caribbean and North America festivals commemorate the adventures Anancy.

In the long tradition of rendering birdsong into instrumental music, no one did it better than master orchestrator Ottorino Respighi. Basing his orchestrations on works by 17th and 18th century composers, Respighi evokes not only songs but also fluttering wings and scraping feet in his 1928 suite "The Birds." After a non-avian introduction, the suite represents a dove, a hen, a nightingale and a cuckoo. "The Birds" has been recorded by many orchestras, including the Atlanta Symphony conducted by Louis Lortie.

Four years earlier, in "The Pines of Rome," Respighi included a part for an actual recording of a nightingale. You can hear it starting at 14:34 in this live video: