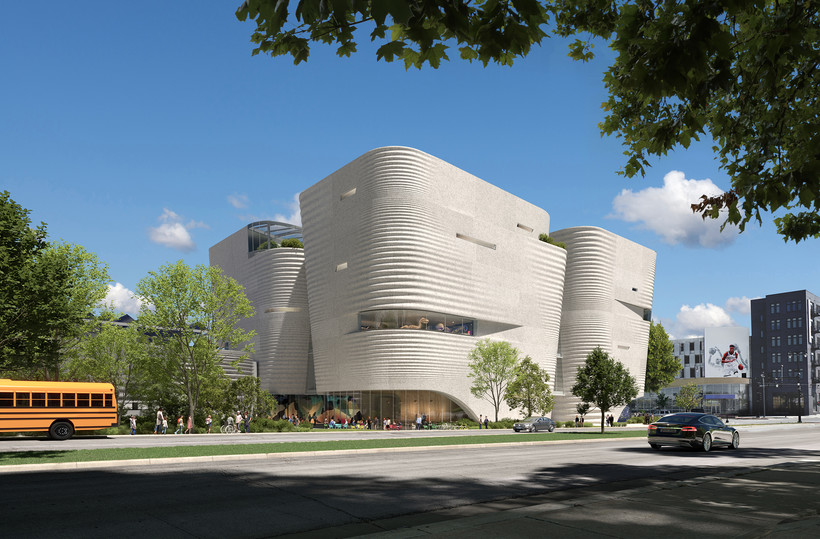 The new home of the Milwaukee Public Museum will be built to resemble Wisconsin’s Mill Bluff — if the bluff was bright white and rendered in concrete and glass.

Leaders of the museum project unveiled the design this week. The building, planned for the corner of N. 6th Street and W. McKinley Avenue, north of Fiserv Forum, will replace an aging structure in such poor condition that it's threatening the museum’s accreditation.

New York-based Ennead Architects designed the building, along with Milwaukee-based Kahler Slater. At the unveiling Monday, lead architects Todd Schliemann and Jarrett Pelletier said the design was inspired by the glacial landscape they encountered during a seven-day trip through Wisconsin with museum leadership.

The architects said they wanted to ground the design of the building in the landscape and culture of the region.

"We couldn’t claim to do that without first seeing the landscape, but secondly talking to the people. And I think so many of us learned so many valuable lessons on that trip," Pelletier said.

Schliemann said the blueprint for the first floor is based on the convergence of the Milwaukee, Kinnickinnic and Menomonee rivers in Milwaukee.

The layered, undulating exterior of the 200,000-square-foot building was inspired by Mill Bluff near Camp Douglas, where a series of sandstone mesas and buttes rise above the bed of an extinct glacial lake.

Pelletier said Mill Bluff "exemplified a feeling that we had throughout the trip that we wanted to embody in this future museum and that was really about experiencing nature and culture but in a way that is multi-layered."

Ellen Censky is president and CEO of MPM, Inc., the non-profit that operates the public museum. She said the museum has secured about half the $240 million needed to complete the project. The state contributed $40 million. Milwaukee County has pledged $45 million. Censky said private donors will be key to funding the balance.

Museum leaders have been planning for several years to replace the existing building at 800 W. Wells St. That building, which opened in the early 1960s, has been plagued by leaks and water damage that is threatening the collections. According to museum leadership, the county deferred about $100 million in capital maintenance costs.

The new building will be somewhat smaller than the existing museum.

"Unlike our current building, we are intentionally designing a structure that assigns purpose to every inch of square footage, reducing wasted space and thereby drastically cutting utility costs," the museum website states.

They hope to break ground on the project in December 2023 and open the new museum in 2026.

Lafayette Crump, Milwaukee's commissioner of city development, said the new museum will be "the largest cultural project in the state of Wisconsin history" and will serve as a gateway to the city's downtown.