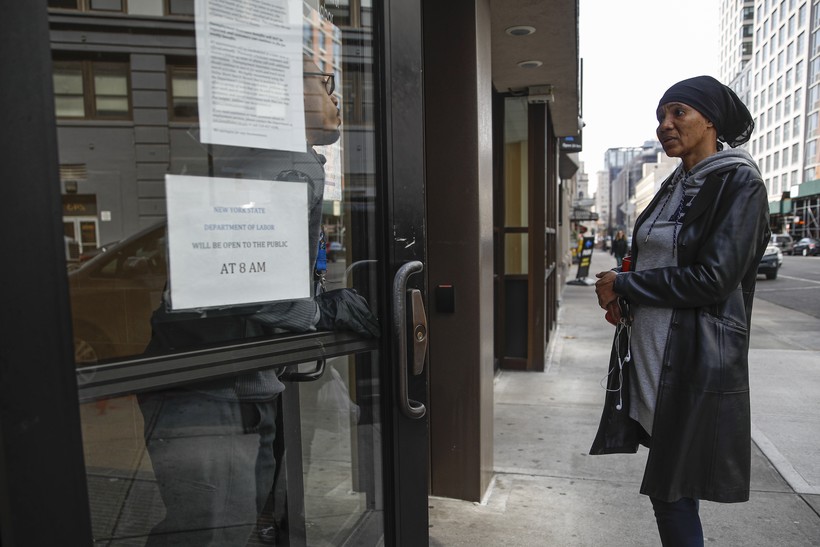 Visitors to the Department of Labor are turned away at the door by personnel due to closures over coronavirus concerns, Wednesday, March 18, 2020, in New York. Applications for jobless benefits are surging in some states as coronavirus concerns shake the U.S. economy. The sharp increase comes as governments have ordered millions of workers, students and shoppers to stay home as a precaution against spreading the virus that causes the COVID-19 disease. John Minchillo/AP Photo

The state Department of Workforce Development projects Wisconsin's unemployment rate is around 27 percent due to closures and social distancing orders aimed at slowing the spread of the new coronavirus.

In a press release Thursday, the DWD reported total new applications for unemployment benefits reached more than 313,000 between March 15 and April 6 — with weekly claims reaching nearly 590,000. The total amount of unemployment benefits distributed by the state during this time equaled nearly $69 million.

"The fact that initial claims ballooned by more than 1600 percent illustrates the unprecedented nature of this pandemic and its effect on our economy," DWD Secretary Caleb Frostman said in the release.

During a Facebook Q&A Thursday, Frostman said additional staff have been transferred to the department's call center to try to keep up with demand.

"We have experienced sustain call volumes of up to 100,000 calls per hour, sometimes 160 calls per second," Frostman said. "So, these truly are unprecedented times and we have been working tirelessly to improve our infrastructure, our telecom systems and our staffing levels to assist claimants from across the state and across industries."

Frostman said the majority of Wisconsin unemployment claims have been filed online, which has caused the DWD website to crash during morning hours. DWD has extended the time allowed to complete online unemployment filings from 14 to 28 days as a result.

Frostman encouraged those who haven't yet filed for unemployment to do so online, as the state has been able to process around 25,000 claims per day.

Frostman said his office has signed agreements with the U.S. Department of Labor that will allow state residents to qualify for additional federal Pandemic Unemployment Assistance.

"We’ve begun internal programming and will begin testing as soon as next week for Pandemic Unemployment Assistance which provides benefits to workers who aren't typically eligible for (unemployment insurance) including the self-employed, independent contractors and freelancers," said Frostman.

But he said the state Legislature and Gov. Tony Evers must first repeal a one-week waiting period for unemployment benefits passed by state lawmakers and former Gov. Scott Walker in 2011. On April 1, Evers and Republican legislative leaders signaled they were making progress toward a state COVID-19 relief package that includes a repeal of the waiting period.

Frostman said once that's eliminated the federal government will pay the first week of unemployment benefits, which will include an additional $600. He said the maximum amount unemployed Wisconsinites could get during their first week could be as much as $970.

Also on Thursday, the state's largest business lobbying group, Wisconsin Manufacturers & Commerce, sent a letter to Evers cosigned by other business associations and 33 local chambers of commerce calling on the governor to release a plan to reopen businesses starting April 24. That's the date the governor's safer-at-home order is set to be lifted.

"Restarting our economy will not happen overnight, and it likely will not be all at once," said Bauer. "That is why the business community and Gov. Evers need to work together on a plan that determines what industries and what areas of Wisconsin can open safely, along with a timeline."