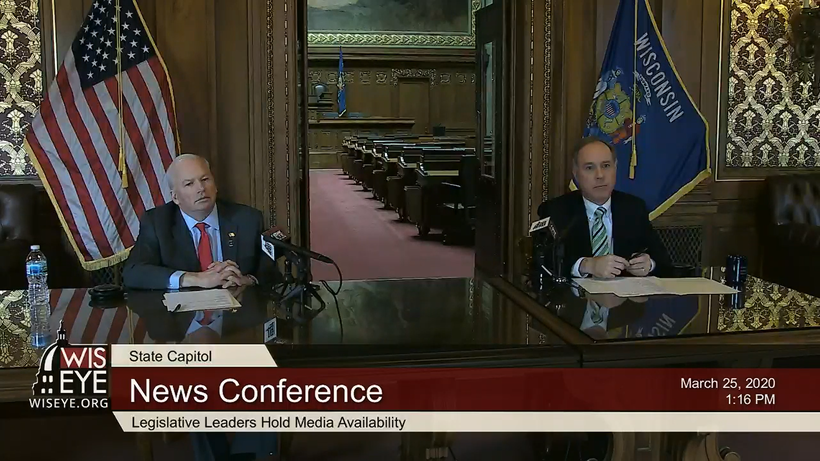 Democratic Gov. Tony Evers and Republican legislative leaders signaled Wednesday that they were making progress toward a state bill to address the economic fallout of the COVID-19 pandemic.

The governor also unveiled a new round of proposals he wants the Legislature to consider as part of a legislative session to address the new coronavirus, including a plan that would guarantee the payment of all unemployment benefits and another that would spend $150 million on grants to help small businesses weather the economic storm.

While Evers and Republicans remained far apart on specifics, Vos and Fitzgerald's comments were noteworthy given their previous opposition to repealing the one-week waiting period, a law signed by former Republican Gov. Scott Walker.

"There is broad support for the temporary suspension of the one-week waiting period for unemployment," Vos said. "We want to make sure that people have access to those benefits."

Fitzgerald said the change would likely be retroactive for people who had already applied for unemployment when the federal government increased benefits.

"Absolutely, I would support that," Fitzgerald said.

Vos said discussions were ongoing about the cutoff date for the retroactive funding.

Vos and Fitzgerald said they were negotiating details of the state's coronavirus response with Democratic lawmakers and the governor's office.

Evers issued a statement calling on lawmakers to act quickly.

"What the federal government has passed is a great start, but I am concerned it does not go nearly far enough," Evers said. "We need to take aggressive legislative steps here in Wisconsin for not only the health and safety of our families and workers, but for our state’s economy."

Other proposals introduced Wednesday by Evers include increased Medicaid funding for health care providers responding to the public health emergency. They also include a "reinsurance" fund for COVID-19 expenses in an effort to keep health premiums low.

Other Evers' proposals unveiled Saturday face long odds in the Legislature, including a plan to give the state Department of Health Services "sum sufficient," or unlimited funding, to address COVID-19. Republicans said Wednesday they are also reluctant to extend Evers' emergency powers indefinitely.

Fitzgerald said he expected the repeal of the one-week waiting period to pass, but he was concerned about whether the state Department of Workforce Development was equipped to handle the surge in calls.

"My bigger concern right now ... is to whether they have enough manpower to make sure that these claims are being responded to," Fitzgerald said.

If the Legislature convenes to debate the plans, it will likely happen via a virtual, remote meeting in order to avoid a large crowd under social distancing guidelines.