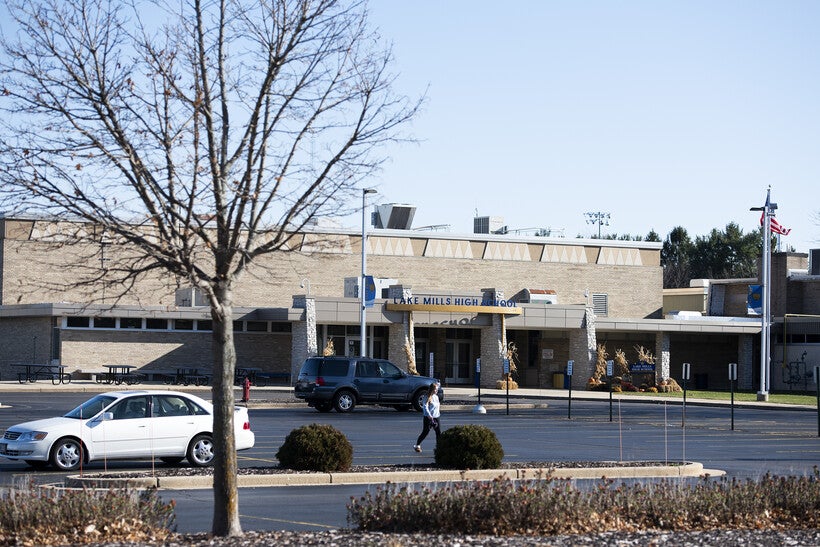 The state's largest teacher's union is asking the Wisconsin Department of Health Services to set specific COVID-19 benchmarks that would dictate when schools across the state should close their doors.

At present, local school boards and administrators make the call on when to shut their schools' doors, sometimes guided by their local health departments.

"If we have black mold growing in our school and it's pervasive – it’s all over – the Department of Health Services, both the county and the state, is going to close down the school because they can see that mold," said Wisconsin Education Association Council President Ron Martin. "But because we can't see COVID, we don't do anything?"

WEAC asked that DHS specifically set a "case incidence" point at which it would require schools to close.

In a letter to DHS Secretary Andrea Palm, it cited the Harvard Global Health Institute's guidance, which puts more than 25 new daily cases per 100,000 people in its highest COVID-19 risk category. Statewide, Wisconsin hasn't been below that threshold since Sept. 21, and many counties have been surpassing that measure for close to two months.

Gov. Tony Evers has repeatedly said he has no plans for a repeat of the spring, when all of Wisconsin's schools were shut down and shifted to distance learning because of COVID-19 concerns. When asked about the WEAC letter at Wednesday's DHS briefing, he again said those decisions should be made locally.

Teachers in several school districts have been asking decision-makers in their districts to set closure criteria in the absence of a statewide standard. Lake Mills teachers filed more than 21 grievances that laid out safety concerns and asked for clear thresholds that would prompt the district to move to all-virtual learning, and Kenosha teachers filed a class-action grievance earlier this week asking for similar guidance.

"I'm not sure what it's gonna take. I've cried through speeches now at the (school) board, I have yelled, I have attempted to be kind and collaborative," said Tanya Kitts-Lewinski, president of the Kenosha Educators Association. "I know that I represent the majority of educators, saying we feel betrayed, we feel heartbroken, we're angry, and I don't know if the board is going to do the right thing."

She said she has one student who's already lost two family members to COVID-19.

With the rate at which teachers are being pulled out of school by quarantines due to possible exposure, she said it feels like just a matter of time before one of the teachers will get fatally ill. Seven Kenosha schools had to close in September after hundreds of teachers called in sick, many because they were told to isolate after contact with someone who tested positive for COVID-19.

"It's frustrating because it doesn't feel like elected officials or the people who have the power to change this situation, are willing to take the decisive action that's necessary," Kitts-Lewinski said.

She noted that Palm and the DHS, as well as the Department of Public Instruction, have said they're relying on local health departments to make those decisions — while the Kenosha health department says they can only recommend schools close, not require closure, and the Kenosha Unified School District (KUSD) board is disregarding that recommendation.

"No one ultimately seems to be taking responsibility here," Kitts-Lewinski said. "We're seeing the cases rise exponentially, and then just waiting for a tragedy, is what it feels like."

The WEAC letter to Palm laid out inconsistencies across Wisconsin school districts in what level of community infection would prompt them to close. The majority of local health departments, WEAC found, do not have school-specific gating criteria that lay out when schools would need to shift to a fully remote model. Even if health departments do have school gating criteria, it isn't consistent from one to the next. Those who try to enforce it by recommending school closures have had mixed success, with some districts staying open to in-person learners despite their local health departments recommending closure.

That's led to a patchwork within counties, where districts operating with the same information and similar levels of COVID-19 spread have made opposite decisions about whether students and staff should be in the building.

"This virus knows no boundaries, this virus knows no geographic lines in the map where there is a county or a school district," said Martin, WEAC president, in his plea for statewide standards. "We have to do everything we can in our power to get control of this virus, stop the spread, until a vaccine is available to us."

Martin noted that setting one universal standard could also provide political insulation for school boards, many of which have faced community backlash for pursuing distance learning. In Kenosha, pushback from angry parents led the KUSD board to approve an in-person fall instruction plan, despite previously approving a virtual learning model. School board members in Middleton-Cross Plains and Oconomowoc are facing recall attempts from groups upset about their votes against in-person instruction.

He noted that nine out of every 10 respondents to a survey sent to WEAC members have said they want the state to set clear guidelines about when schools should close to in-person learning.