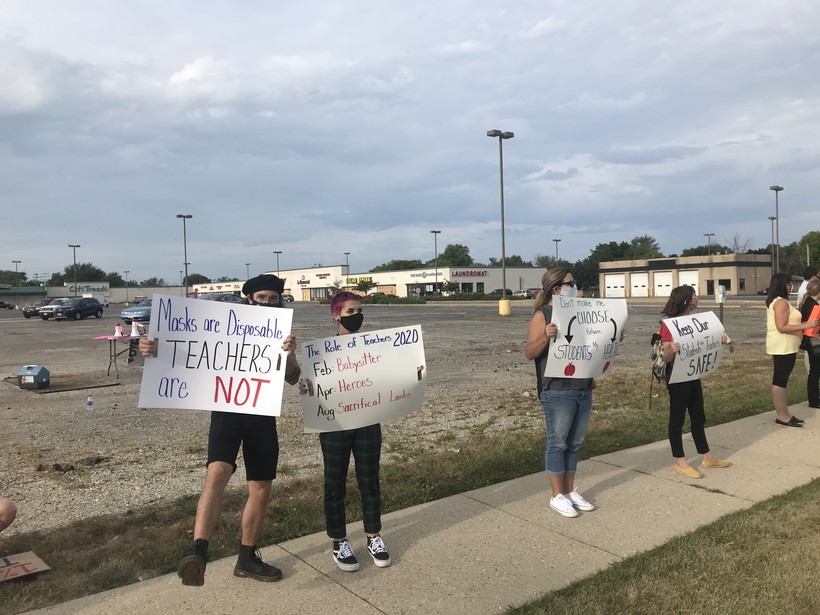 Students Will Be Learning Virtual For The Entire Week
By Madeline Fox
Share:

All three of Kenosha's traditional high schools, one middle school, and three charter and choice schools will be virtual-only all week because of more than 276 teacher absences, the district announced Sunday night.

Tanya Ruder, chief communications officer at the Kenosha Unified School District (KUSD), said some absences were prearranged or expected. However, the district is still trying to get to the bottom of many of the absences, which had been listed simply as a "sick day" without clarity on whether it was related to COVID-19, such as a diagnosis, symptoms or need to quarantine.

In order for teachers to return after possible COVID-19 symptoms, they need: a negative test, a doctor's note proving it's an unrelated illness or 10 days of isolation; and to meet certain other benchmarks.

Ruder didn't have information about whether it was a sick-out or other collective action, and the Kenosha Education Association (KEA) had not returned requests for comment Monday afternoon. The KEA has repeatedly called for the district to go all-virtual on its Facebook page.

Though many of the absences were just for Monday, Ruder said the district opted to switch for the whole week while it sorted out why teachers weren't coming in, and to provide some continuity for families.

"We chose to do so for an entire week because it does take time to transition that way, and to get used to it, and we didn't want to have a lot of back-and-forth happening," she said.

Ruder said as absences started rolling in Sunday, the district first tried to see if it could cover classes with substitute teachers, other school employees who had the necessary teaching credentials but had been serving in an administrative or other role, and by having other teachers in the school building cover some of their colleagues' classes. However, she said, as more absences piled up, that became impossible.

The school district had initially planned for an all-virtual start to the school year, but switched to an in-person learning plan in August after parents objected to more online learning. It's the largest Wisconsin district to start in person, as both Milwaukee and Madison schools are continuing with virtual learning.

Kenosha Education Association vice president Katherine Andrysiak Montemurro was the only person to testify in favor of keeping school virtual for the start of the year at the August school board meeting where board members switched to an in-person reopening. At an Aug. 31 protest after the vote, Andrysiak Montemurro emphasized the district could still go back to a virtual start, and that she was calling for board members to do so.

Kenosha parents had the option to put their kids into virtual-only learning even with the switch to in-person classes. Ruder said 58 percent of students came back in person — and 52 percent, or about 3,600, of those in the seven schools that are closed this week opted to return in person.

She said the reopening plan was developed with help from experts in education, facilities and health, and she felt confident the district had worked hard to make it safe for students and staff. With many students learning from home, she said, KUSD has been working to spread out those learning in schools to maintain social distance.

Ruder estimates the district's total teaching staff is around 1,700 people. She stressed that some 1,500 teachers still did come to school Monday, and that the bulk of the district's schools remained open.