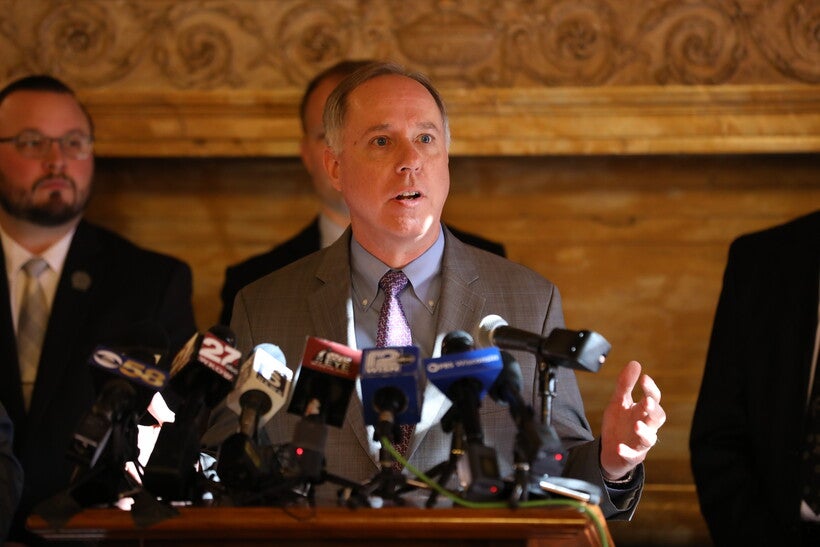 Speaker Robin Vos, R-Rochester, is seen during a press conference proposing a series of law enforcement bills at the Wisconsin State Capitol on Jan. 25, 2020 in Madison, Wis. Coburn Dukehart/Wisconsin Watch

Wisconsin residents will pay an estimated $98,000 in legal fees in a lawsuit that found Robin Vos and Michael Gableman violated open records laws while conducting a review of the 2020 election.

The fees will go to liberal watchdog American Oversight, which filed multiple lawsuits over the past year against State Assembly Speaker Vos, R-Rochester, former Wisconsin Supreme Court Justice Gableman and the State Assembly seeking records tied to the Office of Special Counsel review of the presidential election held two years ago.

Vos and Gableman were found to be in contempt of court for refusing to comply with the state's open records law.

"We have absolutely found out from this case, at least my case, that there was absolutely no evidence of election fraud," said Bailey-Rihn. "We have also found out that apparently the Assembly and some of the leaders of the people of the state believe that they have no obligation to comply with the open records law."

"Those courts have pointed out an award of fees actually rewards of the nonprofit," said Stadler. "It would encourage salaried employees working for a nonprofit organization to engage in fee generation on the organization's behalf, which is seemingly somewhat inconsistent with being a nonprofit corporation."

Attorney Christa Westerberg, who is representing American Oversight, responded saying she is "not aware of any Wisconsin appellate authority that looks to Ohio and Illinois for policy reasons interpreting our open records law."

The watchdog group was also seeking punitive damages from Vos, but Bailey-Rihn decided against it.

"The only reason why I am not awarding punitive damages is either the people in charge of this were so woefully ignorant of the requirements of the open records law or they were flat out flaunting it," said Bailey-Rihn. "I don't know — one way or another, I have a suspicion that might be a combination of both."

The main reason, Bailey-Rihn said, is that state statute on punitive damages is aimed at punishing "wrongdoing by the individual doing the wrongdoing." She said it was also likely Vos would appeal a punitive damages ruling, which would continue to draw out the case.

"And I think the people of the state of Wisconsin have been punished enough for this case," Bailey Rihn said.

Vos hired Gableman last year to investigate the 2020 election at a cost of $676,000 following repeated false claims by former President Donald Trump that the election was stolen from him in Wisconsin and other battleground states.

A statewide canvas, a partial recount and multiple state and federal courts confirmed he lost the election and a review by the nonpartisan Legislative Audit Bureau found no evidence of widespread fraud.

Bailey-Rihn lifted the contempt finding against Vos in June after Gableman testified when and how he destroyed records from his election review. During a hearing, Gableman said that after being hired by the speaker, he had to get up to speed on "how the ballot process works" by doing internet research at the New Berlin Public Library. He also attended a symposium organized by election-denier and My Pillow founder Mike Lindell. Gableman said he was disappointed by a lack of solid evidence presented at the symposium regarding a voting machine conspiracy. The former justice also billed taxpayers for a trip to a discredited election audit in Arizona by an organization Cyber Ninjas, which ultimately confirmed Joe Biden won that state in 2020. Gableman was earning $11,000 per month at the time.

Gableman was also found in contempt-of-court  in another case associated with the election review. In that case, Dane County Circuit Court Judge Frank Remington ordered fines of $2,000 per day until Gableman complies with orders to produce records from the election review.

The Office of Special Counsel led by Gableman produced a report in March that suggested state lawmakers consider decertifying the 2020 election results. Vos has rejected the suggestion, saying the state's constitution doesn't allow him to do that.