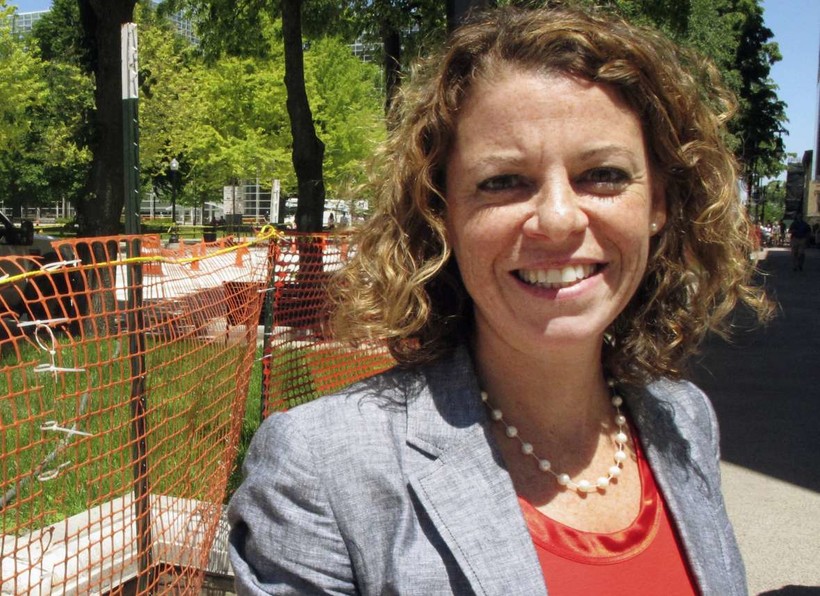 Dallet, a Milwaukee County Circuit Court judge, gave the following interview. Interviews with Burns and Screnock can also be found online. All transcripts have been edited for clarity and brevity.

On Why She's Running

I am running because we are at a time when our rights are under attack, every day, tweet by tweet. And we have a broken Supreme Court, and we need someone with values and experience to step up and repair that court. I am currently a judge for almost a decade, a prosecutor before that for more than a decade. I've worked for over 20 years in our courts, protecting the vulnerable, fighting for our rights. and I want to keep doing that on our Wisconsin Supreme Court.

On Civility On The Court And Her Experience

I think that distinguishes me from my opponents as well because I am someone who can work with others.

In looking at Mr. Burns, the way he's acted throughout the campaign — his blatant statements that he's not planning on working with anyone... I will start this term on Aug. 1 certainly protecting our rights and values that make Wisconsin great, but also with an ability to work with the people that are on that court to do the best we can for the people of our state.

On The Role Of Politics, Values And The Possibility Of Bias For Judges

I think it's important that the voters do know my values, and I'm happy to share those values with them.

I care about clean air and water. I care about having great public schools, workers rights, equal protection under the law, women's rights.

Those are my values, but I, as a judge, I know that I can't take positions on cases before they come in front of a court, and we need to make sure that our judges are fair and impartial. We need to make sure when people go in front of a judge or justice that they think they're going to get a fair shake, that they know that they're going to get an air shake. And when you come out taking positions on issues, pre-deciding cases, you risk that fairness that we all demand from our courts, that we're missing right now and we need to get back to that.

... It's very different to express a personal value and to still be able to be fair and impartial, to know what it's like. And I'm the only candidate that has 10 years of knowing what it's like to apply the law and apply it to the facts of the case. That's very different than coming out and making specific statements about specific legislation, for example, which is what Mr. Burns has done.

That is a situation where someone might ask you to recuse yourself, but we do all have values, that's true... We can share those values. I'm happy to do that.

This is a symptom of a system that's broken.

When I talk about a broken Supreme Court, we can look to our lack of recusal and we look specifically to the John Doe case, and that was a case where $2.25 million was sent by a special interest group on Justice Gableman's campaign to buy a justice and then appeared in front of him as a party to the case, the organization that spent that money and Justice Gableman was asked to recuse himself and he refused to do that.

That is a symptom of a system that's broken.

We need to get a strong recusal role, something that's meaningful so that the public can have confidence that justices and judges are going to be fair — and that's something I've been talking about throughout the campaign from the very beginning, for me to really get back to restoring confidence in our leaders, trust in our courts. We can only do that with electing someone who has the values and experience, and I'm the only candidate that has over 20 years, over 10,000 cases working in our courts. I'm also endorsed by more than 200 judges right now, people that know our courts are endorsing me because they know that I'm the one that can do this job.

On Her First Campaign Advertisement About President Donald Trump

We're at a moment in time where we our feeling threatened. All of the values that (I) talked about — clean air and water, and equal protection, and women — are under attack, and this is something we all feel and we all relate to, and I'm the candidate that is going to be able to protect those values at this critical time.

And there is just too much at stake right now to cast someone without the experience needed to advocate for the policies that need to be changed and to make sure to protect those values ... to the decision-making of the court.

On Whether The Ad Is An 'Overt Political Statement'

This ad is talking about values ... It is the same message that I've had from Day 1 of this campaign, and it is important that we look at this all in the context of the world that we're living in.

I think an additional look at the moment in time we have here for women. Women have been under attack, and women are finally feeling strong enough and safe enough to be able to speak out against the harassment that women have suffered for years; and as a (female) candidate, as someone who has experience both through watching in court and in my own experiences not having a level playing field, I think it's really important to make sure that that playing field is leveled and that we recognize that here in our state of Wisconsin that only, of all the judges we have in our state, 1 in 5 are women...