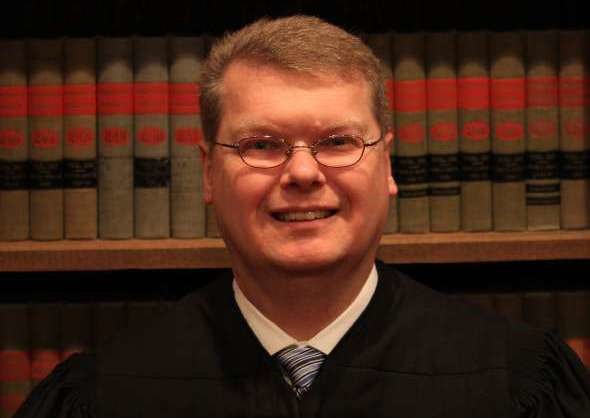 Michael Screnock, a Sauk County Circuit Court judge, gave the following interview. Interviews with Burns and Dallett can also be found online. All transcripts have been edited for clarity and brevity.

On Why He's Running

I'm running for two reasons. First, I care deeply about Wisconsin. I was born and raised here, raised my family here; but also I care deeply about the rule of law and I believe strongly that it's the role of the court to interpret and apply the law as written, based not on the justice's personal or political beliefs, but based on the statutes and the constitution. When I saw my two opponents announce their candidacies, I was not satisfied that either one of them share my view of the court's goal. That certainly has borne itself out as the campaign has proceeded and so ... I believe strongly that we need our next justice to be one that is committed, unwavering, to following the rule of law.

I have the broadest experience, and I think it is the most full experience for preparing someone to serve on our state's highest court.

At the very core of most of the cases that our Supreme Court hears is a tension between private interests and society's interests as those societal interests are reflected in government regulations, and so I spent the first nearly 12 years of my career working in local government as a finance director and city administrator and in those roles, my job was to assist city councils and mayors, first, to understand the limits of their lawful authority, and then to accomplish their goals within the confines of that authority. Then, for eight years, after I went to law school, got my degree, I worked for eight years as a private attorney and most of my work there was done with private interests, private businesses and individuals in their interactions with government. I have spent most of my career wrestling with that tension between private interests and society's interests and I've done so from both sides of the equation, so I understand the perspective of government and what motivates government officials in trying to get their job done, and I understand it from the perspective of private interest as well.

But now, as a judge — and Governor Walker appointed me in 2015 to the circuit court here in Sauk County — I grew up in Baraboo, so I'm serving in my hometown, as a judge now, I'm not an advocate for either party, in any case that comes before me. My fidelity now is to the law and the law alone, but I bring to the bench that vast experience. I also have, I believe, the most experience among the candidates in working in our appellate courts. I worked on 13 different cases in our state appellate court system. A lot of those cases ended up at the state Supreme Court and the work that was done as a attorney in researching those cases and drafting briefs is in large respects, the same task that a Supreme Court justice must do when dealing with those same cases — and that is to do research on what the law says and it's detailed, lengthy, I call it deep-dive legal research to ... try to understand what does the law say about these complex questions, and so I've done that work as an attorney in the context of briefing cases to the Court of Appeals and our state Supreme Court and so I'm very well prepared to hit the ground running on the Supreme Court doing that very same work.

On The Role Of Politics And Partisanship For Judges

Well, (partisan report shouldn't play a role) and the reason it shouldn't is because I have been very clear from day one about what my judicial philosophy is and my judicial philosophy is that the role of justice is to do the research. Justice Wilcox (former justice of the Wisconsin Supreme Court) told me this: He said, "This is what I did when I was on the court. You do your research and you go where the law takes you. You do not have a case come to you and say, 'Oh, I see this. I see how I want this case to come out, decide the outcome on the front end and then just find some legal path of reasoning to get to the outcome."

I am committed and I do commit to the people of Wisconsin that I would, at every opportunity, set aside my personal feelings about a case or an issue and decide the case solely based on the law as I find it. I think that's critically important. Now, it shouldn't be surprising that people either like or dislike that judicial philosophy, and so I don't think that people should be surprised that people are lining up behind my candidacy, including the endorsement of a bipartisan majority of the sheriffs all across the state. I've been endorsed by the Wisconsin Realtors Association, and those groups understand that the only way we have stability in the law is when justices exercise the self-restraint necessary to set aside their personal feelings and not decide cases based on the way the justices want the case to come out but based on the law.

The other thing is that I believe strongly in justices' recognizing and respecting separation of powers, and what I mean by that is that when a law comes to the court and the question is, is this law unconstitutional, the only question, the only analysis that the court ought to be giving is whether or not when the Legislature cast that law and the governor signed it, did they succeed some constitutional boundaries. The question is not, is this good public policy? And sometimes people get confused by that and they want to use the courts as a tool to overturn what they view as bad public policy decisions made by those other two branches ... the foundation of government is an expectation that the Legislature and the governor are going to set policy for the state. That's their job and it's why you have lobbying and it's why you have robust campaigns that deal with issues for those feats. When it gets to the court, the question is not whether it was good policy. The question is did those other two branches act lawfully? And that, quite frankly, is not a partisan question or a partisan issue. My judicial philosophy does not change depending on what party is in control of the Legislature or what party has control of the governor's office. My judicial philosophy remains the same and that is no matter who's in control of those other two branches, they get to set policy for the state. It's not the court's role to decide they made a bad policy choice and thus overturn it.

That's a very important question and at the very foundation of our judicial system, which is an integral part of the government that we have, governing ourselves, the very foundation of our judicial system, is the notion and the importance of having a fair and impartial judiciary. And so for me, as a judge right now in Sauk County, and for every justice on our Supreme Court, for every case that comes in front of them, each individual judge and justice has to determine whether there's any reason why that individual cannot sit on the case and hear the case because for some reason they cannot be fair and impartial.

The issue of recusal is quite frankly a lot easier for me to know on the circuit court 'cause we have hundreds of circuit court judges and we can go through substitutions and reassignments until we find a judge that can sit on the case without any problem. We don't have that opportunity at the Supreme Court, so that the questions about recusal are much more complex and tricky at the Supreme Court, and quite frankly, more important because those cases are determining what the law is that applies statewide and controls me, as a circuit court judge, and controls our Court of Appeals as well.