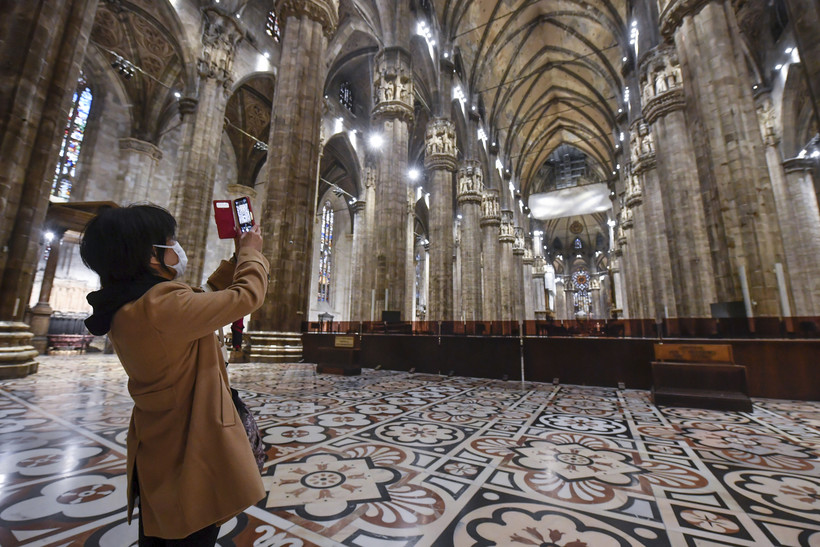 A tourist wearing a face mask takes pictures inside the Duomo gothic cathedral as it reopened to the public after being closed due to the COVID-19 virus outbreak in northern Italy, in Milan, Monday, March 2, 2020. Churches in much of Veneto and Lombardy, two of regions hardest hit by the virus, have closed their doors under widespread measures aimed at containing the spread of the virus. Claudio Furlan/LaPresse via AP

Some Students Will Continue Classes Online
By Elizabeth Dohms-Harter
Share:

Stefania Draghicchio hoped to spend part of her semester studying abroad in Italy visiting relatives — one of her grandparents' siblings lives in Rome and another in northern Italy.

But her plans to spend a semester away from the University of Wisconsin-Eau Claire and immerse herself in the culture and her own heritage was cut short by the novel coronavirus, which has since become widespread enough in Italy for the Centers for Disease Control and Prevention to issue a travel warning.

As of Thursday afternoon, the CDC reported that this coronavirus, named SARS-CoV-2, has been detected in almost 70 locations. This virus is causing the disease referred to as COVID-19, which shows as fever, coughing and difficulty breathing.

The issuance by the CDC spurred universities into action, some of whom have policies that recommend students return home if they're in host countries that the CDC labels with Level 3 travel notices, which so far includes China, Iran, South Korea and most recently Italy. Level 3 means that nonessential travel should be avoided because of widespread community transmission.

Draghicchio, a 19-year-old psychology student, has some time to soak up her last few days in Italy between Thursday, when classes were canceled, and Sunday when a flight will bring her back home to Green Bay. She'll stay there for 14 days under a self-guided quarantine, unless she's given other instructions. She had heard she could be sent to a military base for quarantine. 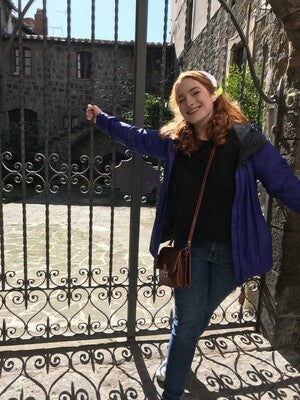 Study abroad programs in public universities across Wisconsin are trying to determine next steps for students across the globe as COVID-19 continues to make deadly debuts.

At UW-River Falls, where three students studying in South Korea returned home on Feb. 28, executive director of the Office of International Education Heidi Soneson said the challenge now is making sure students stay on track to earn credits after the spread of COVID-19 hijacked semester study abroad plans.

Some universities are making plans for students to continue their coursework through their host university via online classes. That's the case at UW-La Crosse, where 11 of more than 80 students studying abroad have been impacted by the spread of the virus. Those students were studying in China, South Korea and Italy.

"Many Italian universities are offering online coursework, allowing students to continue if they wish," said Emelee Volden, director of International Education and Engagement at UW-La Crosse. "Other students may have an entire semester lost — we're still working through all of this with them."

When back at UW-Eau Claire, Draghicchio will continue to take classes with her Italian professors online.

She is one of 17 students at UW- Eau Claire who have been affected by COVID-19. Four students studying in South Korea returned home Tuesday. The university has 130 other students currently studying abroad in countries with a CDC travel warning at Level 2 or lower, according to integrated marketing and communications associate director Michael Knuth.

Draghicchio said she tried to fight to stay in Italy, especially because the spread of the virus isn't yet severe in her host town of Tuscania. But she said she risked not getting university credits and a refund if she opted to stay. Numerous schools across the state have contingency funds to reimburse students for their expenses if and when these events occur.

Lauren Spierings, a sophomore at UW-Eau Claire, is currently studying in Spain and hopes to stay for the full semester, which ends May 16. She said her professors there have spoken about the virus in class, and made students aware of what health professionals are advising they do to stay safe, such as washing their hands regularly and keeping their hands away from their faces.

Nearby, UW-Stout has brought six students home — four from South Korea and two from Italy. They arrived in the U.S. between Feb. 26 and Wednesday. The campus still has 21 students abroad.

"We are monitoring their situations on a daily basis," said Doug Mell, director of executive communications and external relations.

Mell said the university decided to suspend programs in countries that reach Level 3, determined either by the CDC or U.S. Department of State. Other universities are following similar protocols, such as UW-Eau Claire, where a Level 3 status triggers review from the University Travel Risk Committee, which makes recommendations about whether to suspend or cancel programs.

Spierings, the student in Spain, said UW-Eau Claire has reached out to her multiple times with updates and advice about the virus. She said if the CDC raises the outbreak to a level 4, students would be sent home immediately.

"I am not seriously worried about coronavirus at this point in time," she said, noting there have been one or two cases of the virus in her host city of Valladolid. "If it were to worsen I might become more worried, however the flu kills more people every year than (coronavirus) likely will, and I know that I stand a good chance of overcoming the virus since I am younger."

This season, influenza has sickened about 32 million people in the U.S., caused 310,000 hospitalizations and 18,000 deaths. That being said, the death rate for COVID-19 is higher than the flu.

In people with heart and lung disease, weakened immune systems, infants and older adults, the virus can lead to other infections such as pneumonia or bronchitis, according to the National Foundation for Infectious Diseases.

COVID-19 is caused by a virus similar to SARS and MERS, which led to outbreaks in the past few decades. COVID-19 has so far killed about 3,000 people and led to more than 93,000 illnesses worldwide. Eighty people have died in Italy and 2,502 cases have been confirmed.

Draghicchio said it's strange to see so many fewer people roaming the streets in Italy than what's typical. Still, she said the outbreak doesn't seem to have folks panicked so much as concerned about how it will impact tourism and the country's economy.

"It's interesting to see how Americans view it versus how Italians themselves view it," she said of COVID-19's spread. "Because (Italians are) like, 'Eh. We feel like it's going to die down in a couple weeks.'"