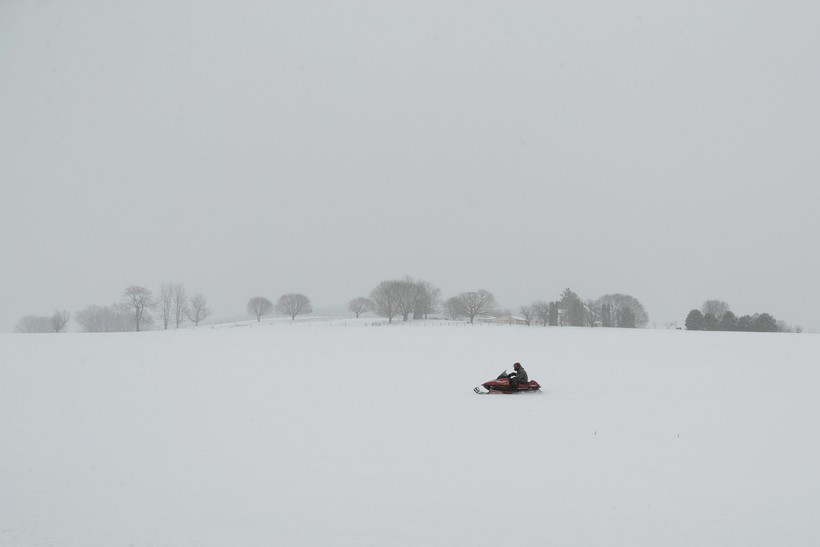 A person rides a snowmobile through a field during a winter snow storm, Tuesday, March 14, 2017, in Gap, Pa. AP Photo/Matt Slocum

12 People Have Died On Snowmobiles So Far This Season
By Rob Mentzer
Share:

Twelve people have died while snowmobiling in Wisconsin this season, and the state could be on track for a deadlier winter than its 10-year average.

Experts say an unusually wet and warm winter in the Northwoods has contributed to some of the deaths, which happened when snowmobilers fell through lake ice that was not thick enough to support them.

On Wednesday morning, a 15-year-old boy was killed on a snowmobile in Outagamie County when an SUV driver hit him, the Appleton Post-Crescent reported. The boy had been on his way to school. He is the fourth person to die on a snowmobile in the last two weeks.

It was also an unusual case. Most snowmobile deaths are the result of crashes when a driver loses control of the vehicle on a trail or plunges through ice on a river or lake. Experts say excessive speed and alcohol consumption contribute to a majority of deaths.

"We should always strive toward zero fatalities," said Lt. Martin Stone, a conservation warden with the Wisconsin Department of Natural Resources. "Our department is working hard toward that goal."

Wisconsin has had an average of 16 snowmobile deaths per season from the 2009-10 winter season through 2018-19, according to a WPR analysis of state data. On average, February is the deadliest month for snowmobilers, with an average of six deaths. There have been an average of five deaths in January in the same time period, and two in March.

But larger trends in snowmobile fatalities are difficult to track because the length of the season can vary widely, depending on temperatures and snowfall totals across the state. When there are more people on the trails, there may be more fatalities, said Dave Newman, president of the Association of Wisconsin Snowmobile Clubs.

"Obviously one death is too many," Newman said. "And many of these are preventable."

So far in 2020, seven fatalities have involved alcohol use by the driver, according to the DNR. Newman said the two biggest factors in deaths are alcohol use and excessive speed.

The DNR publishes safety guidelines, often echoed by local and statewide snowmobiling associations. They include "zero alcohol," "slow down" and "stay on marked trails."

Stone said this season, thin ice has been a particular hazard.

"Stay off the open water for sure," he advised snowmobilers. "Don't skip across open water. … (And) you can never know if that ice is positively safe, and it's always changing."

Wisconsin requires any new snowmobiler born after Jan. 1, 1985 to take a state-approved safety course. Newman said he believes the requirement is making a difference.

"It seems like the majority of accidents and fatalities, many times, are older people who have not had any safety training," Newman said. "Hopefully as we progress and get more people trained, it's going to be helpful (in reducing fatalities)."

Of the deaths in 2020 tracked by the DNR, only three drivers were confirmed to have been safety certified.

Newman, who lives in the central Wisconsin village of Unity, is an enthusiast and a booster of the sport. He started riding on the dairy farm where he grew up, and as an adult got involved with his local club before becoming president of the state association, a volunteer position he's held for the last five years.

He said snowmobiling is a way to appreciate Wisconsin's winters, see new places and get views of the state off its highways. And the rider, he said, can help ensure his or her own safety by making responsible choices.

"Snowmobiles are powerful machines, and they can go fast," Newman said. "But they only go as fast as you make them."

Zero Alcohol. Drinking alcohol before snowmobiling or during your ride slows your reactions, impairs your judgment, and is a leading contributor to snowmobiling deaths.

Slow down. Speed is a contributing factor in nearly all fatal snowmobiling accidents. Drivers should proceed at a pace that will allow ample reaction time for any situation. Drive at moderate speeds, and drive defensively, especially after sunset.

Carry a first-aid kit and dress appropriately. Your first-aid kit should include a flashlight, knife, compass, map, and waterproof matches. Always wear a helmet with goggles or a face shield to prevent injuries from twigs and flying debris. Wear layers of water-repellent clothing and make sure you have no loose ends that might catch in the machine or tangle in equipment.

Avoid traveling across bodies of water when uncertain of ice thickness or water currents. Rapidly changing weather and moving water in streams and lake inlets also affect the thickness and strength of ice on lakes and ponds. Snow cover can act as a blanket and prevents thick, strong ice from forming.

Stay on marked trails or, where allowed, on the right shoulder of the road. Be alert for fences, tree stumps and stretched wire that may be concealed by snow.

Never travel alone. Most snowmobile accidents result in personal injury. The most dangerous situations occur when a person is injured and alone. If you must travel alone, tell someone your destination, planned route, and when you will return.