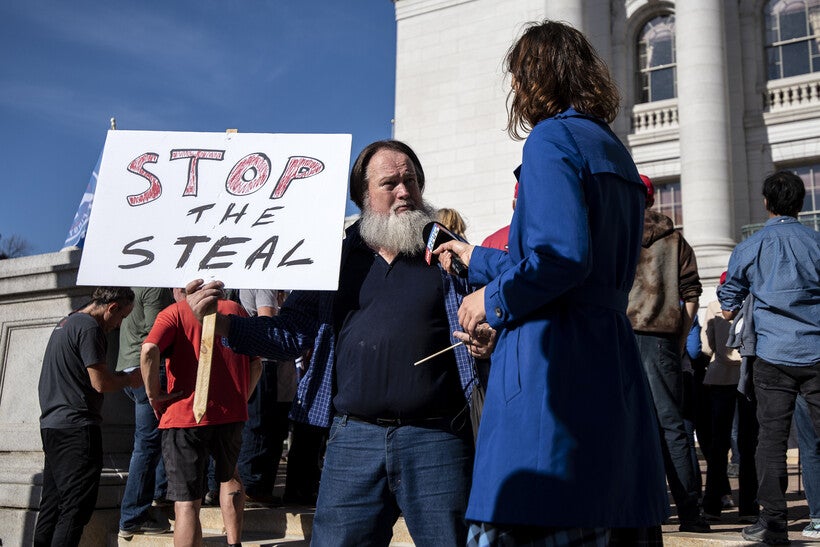 A supporter of President Donald Trump holds a sign as he speaks to a reporter Saturday, Nov. 7, 2020, in front of the Wisconsin state Capitol. Angela Major/WPR

Wisconsin appears set to be the only state in the nation to miss a federal election deadline, thanks to a lawsuit from the Trump campaign.

Under federal law, Congress must accept a state’s election results if any state-level challenges, like state lawsuits or recounts, are resolved by the so-called "safe harbor" deadline. In 2020, that deadline falls on Dec. 8.

According to Rebecca Green, professor of election law and co-director of the Election Law Program at William & Mary Law School, Wisconsin won’t qualify for the "safe harbor" deadline this year because of an ongoing state-level lawsuit brought by President Donald Trump seeking to overturn President-elect Joe Biden's victory in Wisconsin. That lawsuit, which was rebuffed last week by the Wisconsin Supreme Court, is set for arguments before a state circuit court on Thursday.

"If a state doesn’t complete any post-election processes by the 'safe harbor' deadline, that doesn’t mean its electoral votes will be thrown out or that Congress won’t accept them," she said. "It just means Congress isn’t obligated to accept them."

"There would be no reason not to," she said.

In an official statement on Tuesday, the Trump campaign cast doubt on the finality of the "safe harbor" deadline.

"The only fixed day in the U.S. Constitution is the inauguration of the President on January 20 at noon," said Rudy Giuliani and Jenna Ellis, attorneys for the president. "Despite the media trying desperately to proclaim that the fight is over, we will continue to champion election integrity until legal vote is counted fairly and accurately."

In addition to the state lawsuit challenging the election results, there are three pending federal cases related to Wisconsin’s 2020 presidential election. Those were brought by the Trump campaign, former Trump attorney Sidney Powell and the Texas attorney general.

Presidential electors in Wisconsin and across the country are scheduled to meet Dec. 14 to cast states’ electoral votes.