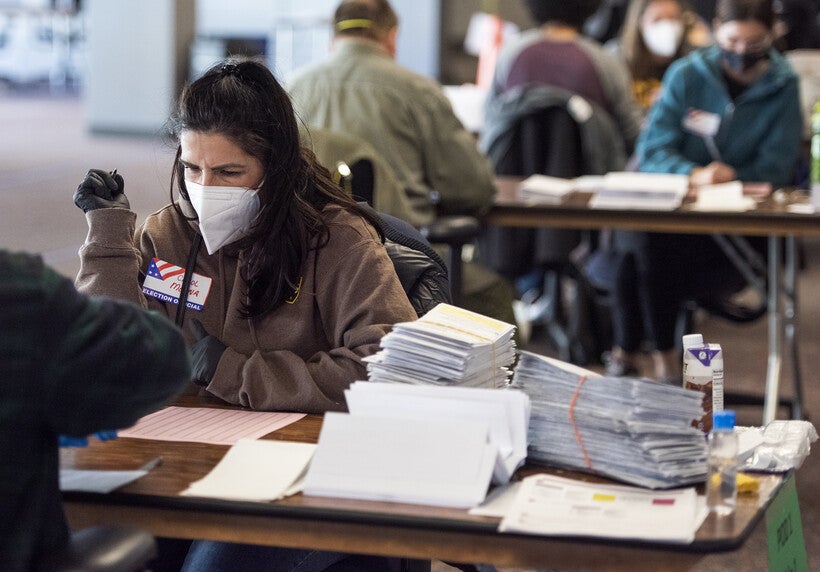 The Case Could Still Find Its Way Back To The Court
By Shawn Johnson
Updated:
Thursday, December 3, 2020, 6:50pm
Share:

The Wisconsin Supreme Court has denied one of President Donald Trump's lawsuits seeking to overturn the results of the state's November election, with a key justice ruling that the president should have filed the lawsuit in a lower court first.

In addition, justices rejected another lawsuit Thursday that sought to nullify Wisconsin's election results and have the Republican-controlled Legislature pick the state's presidential electors instead.

The 4-3 rulings presented setbacks for Trump, but didn't mean an end to his legal fight in Wisconsin, with another lawsuit still pending before the state Supreme Court and two additional lawsuits filed in the federal court system. The court's ruling also left the door open for Trump to re-file his lawsuit in circuit court.

Thursday's state Supreme Court decisions hinged on votes by Justice Brian Hagedorn, a member of the court's 4-3 conservative majority who has shown a willingness to go his own way on some of the big issues of the day.

In a brief concurring opinion in the Trump lawsuit, Hagedorn didn't delve into the merits of the president's case. Rather, he ruled that lawsuits challenging a recount must start in circuit court — not the Supreme Court — under Wisconsin state law.

"Following this law is not disregarding our duty, as some of my colleagues suggest," Hagedorn wrote. "It is following the law."

Shortly after the court's ruling, the Trump campaign said it would refile its case in circuit court immediately.

"We welcome the direction of the Supreme Court to file in Dane and Milwaukee counties as we pursue making certain that only legal votes count in Wisconsin — and we will immediately do so," said Trump campaign attorney Jim Troupis. "It was clear from their writings that the court recognizes the seriousness of these issues, and we look forward to taking the next step. We fully expect to be back in front of the Supreme Court very soon."

Gov. Tony Evers said Thursday afternoon that he was happy with the court's ruling in the Trump lawsuit, but the governor noted that it wasn't joined by the entire court.

"I thought it was a good decision," Evers said. "I was frankly amazed that it was not unanimous."

The court's remaining conservatives joined an emphatic dissent written by Justice Rebecca Bradley, who wrote that the court's majority was "passively" permitting the Wisconsin Elections Commission "to decree its own election rules," overriding election laws passed by the Legislature.

"Allowing six unelected commissioners to make the law governing elections, without the consent of the governed, deals a death blow to democracy," Bradley wrote.

Bradley's dissent was also critical of arguments by Evers and other Democrats that if the Trump campaign had issues with Wisconsin's election laws, it should have challenged them before the election, not after.

"The respondents implore this court to reject the challenge because, they argue, declaring the law at this point would 'retroactively change the rules' after the election," Bradley wrote. "It is THE LAW that constitutes 'the rules' of the election and election officials are bound to follow the law, if we are to be governed by the rule of law, and not of men."

But Chief Justice Patience Roggensack also wrote a separate dissent, which was joined by Justice Annette Ziegler, suggesting that even if the court were to hear the case, Trump might not get what he's looking for.

"We, as the law declaring court, owe it to the public to declare whether WEC's advice is incorrect," Roggensack wrote. "However, doing so does not necessarily lead to striking absentee ballots that were cast by following incorrect WEC advice. The remedy Petitioners seek may be out of reach for a number of reasons."

The court's three liberals, Justices Ann Walsh Bradley, Rebecca Dallet and Jill Karofsky, all ruled that the case should be denied.

The second case decided by the court Thursday was filed on behalf of Dean Mueller, of Chippewa Falls, by his wife, attorney Karen Mueller. It argued that the drop boxes used to collect absentee ballots in the 2020 election were illegal, which was enough to overturn the results of the entire election. The court declined to hear the case in a 4-3 ruling without explanation.

Democratic Presidential-elect Joe Biden defeated Trump by 20,682 votes in Wisconsin, flipping a state that Trump won by fewer than 23,000 votes in 2016.

Trump filed his lawsuit with the state Supreme Court after ordering a recount in Dane and Milwaukee counties, Wisconsin's Democratic strongholds. Recounts there showed little change to the final results and no evidence of fraud.

Trump's lawsuit challenged more than 221,000 absentee votes cast in both counties, not on the grounds that voters did anything wrong, but because it said clerks there were relying on bad advice from the Wisconsin Elections Commission. Some of that guidance from the commission had been in place since 2011.

Trump's campaign wants to reject the more than 170,000 ballots cast in person before Election Day on the grounds that voters did not fill out written applications. The Wisconsin Elections Commission has said for years that a separate application isn't necessary when voting in-person absentee.

Trump's campaign is also challenging about 5,500 ballots where clerks completed a witness' address, which is also allowed under Wisconsin Election Commission guidance.

The campaign is challenging another 28,000 ballots from voters who said they were indefinitely confined. Democrats argue those ballots were cast using guidance from the WEC that was informed by a state Supreme Court ruling earlier this year.

Another 17,000 votes challenged by Trump were absentee ballots collected at "Democracy in the Park" events sponsored by the city of Madison earlier this year. Republicans raised concerns about those events before they were held but never challenged them in court.

Trump filed a federal lawsuit Wednesday raising some of the same issues he challenged in the state case. A fifth lawsuit also remains active in federal court.