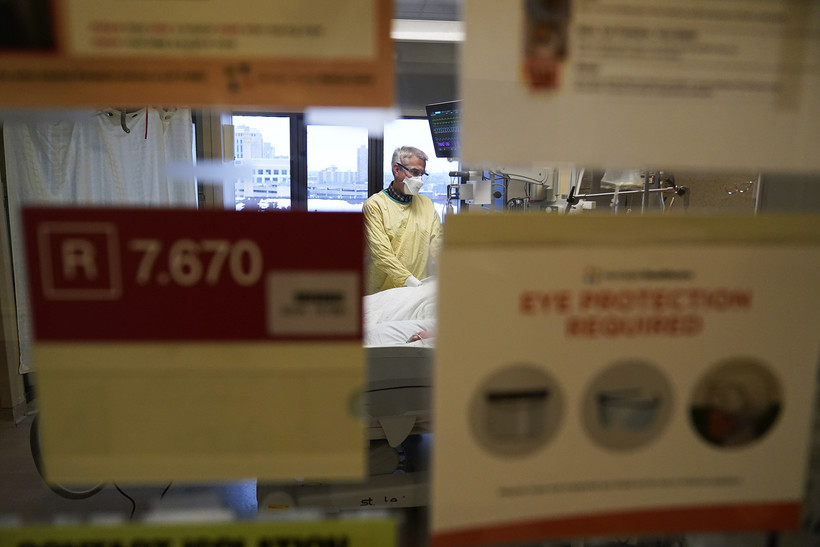 Wisconsin's seven-day average of new COVID-19 infections reached its highest point in the pandemic Thursday, as officials said they do not yet see evidence that the latest wave has crested.

The state confirmed more than 15,000 new cases on Thursday, Department of Health Services Secretary-designee Karen Timberlake announced, for a seven-day average of 18,836 new infections per day.

The numbers show the intensely rapid spread of the omicron variant of the virus, which has been found to be more than four times as contagious as the previously dominant delta variant.

Gov. Tony Evers and DHS on Thursday announced a new campaign encouraging parents and guardians to get their children vaccinated. The campaign, called "Keeping Kids Safe and in School," will include television and digital ads on social media platforms. The state has continuously promoted vaccination efforts since the vaccine became widely available in early 2021, but the new campaign is the first one to make a case specifically for vaccinating youth.

"Since the end of August 2021, children in Wisconsin have made up more than 1 in 5 new confirmed cases of COVID-19," said Dr. Jasmine Zapata, chief medical officer of the DHS Bureau of Community Health Promotion. "As the omicron variant is spreading through our communities, it's important now more than ever to protect our children's health."

This week, state data showed 6,270 new infections for those younger than age 18. They account for one-third of the state's seven-day average of nearly 19,000 infections per day.

COVID-19 infections among children are typically less severe. But as with adults, the overwhelming majority of severe cases are among those who have not been vaccinated against the disease.

"We're seeing that the majority of children who are hospitalized or in the ICU are unvaccinated," Zapata said. "The best way to prevent severe illness and deaths is to get vaccinated, and that's one of the best ways we can protect our children."

According to state data, 54 percent of children ages 12 to 17 have completed their vaccine series, and only 18 percent of children ages 5 to 11. A COVID-19 vaccine has not yet been authorized for children under 5. Data from the Wisconsin Hospital Association showed that on Wednesday there were 2,163 people hospitalized with COVID-19, 488 of whom were in intensive care units. That's down slightly from the Jan. 12 peak of 2,278 hospitalized COVID-19 patients, which was the most ever hospitalized throughout the pandemic. WHA's published data does not give patients’ age.

National data on new infections shows a modest decline in the past week. That trend has not yet shown up in Wisconsin, said Dr. Ryan Westergaard, DHS chief medical officer.

"We can be hopeful that we are near the peak if not there already, but unfortunately we haven't seen that in our data," Westergaard said.

Countries including South Africa and the United Kingdom that saw the omicron variant spread earlier than it did in the U.S. saw a rapid increase followed by a rapid decline in new infections. Westergaard said "the key unanswered question" for the U.S. is whether "the decline is going to happen quickly, or is it going to be a prolonged decline."