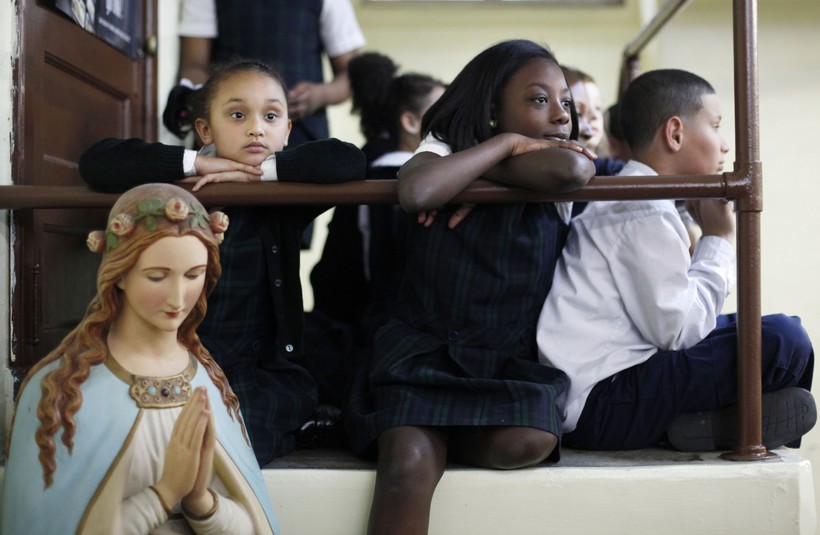 In deciding whether to convene classes in person this fall amid the ongoing coronavirus pandemic, Wisconsin’s private schools are coming up against many of the same challenges as its public ones — but they also have some advantages that many public schools do not.

"In the world of private education, and in the world of Catholic schools, we naturally have smaller class sizes, we naturally have a really strong pulse on what the families' desires are," said Kim Desotell, president of Green Bay Area Catholic Education, or GRACE. "We’re able to be more nimble with decisions, there’s not a lot of government regulations that are required in terms of, in order to make this change, you need to fill out six forms — that’s just not us."

Because parents of private school students are choosing — and often paying — to have their kids in those institutions, the school administration often has a more direct line to families. They’re also often smaller, which makes a lot of changes easier.

The Diocese of Superior runs 14 private Catholic schools in the northern reaches of the state, serving about 1,800 students from preschool through at least fifth grade, though most go through eighth.

"Our classes are so much smaller that we’re able to social distance our students so much easier, because we don’t have the capacity of students like the larger communities have," said Peggy Schoenfuss, director of schools for the diocese. "I’ve got some schools that have capped their class sizes to 12, some to 18 depending on the room size, and we’re able to social distance pretty well in our schools without having to worry about having to hire extra staff."

They are reliant on Superior’s school buses to get about half their students into schools, though, as they serve a largely rural population that needs help getting to the schools in town. GRACE, similarly, has some school buses and uses the public school busing system to help get some of its kids into the classroom, and is waiting to hear how the bus contractors plan to handle pandemic precautions.

That’s not the case for some schools in more populous areas. St. John Vianney, a private school in Janesville that serves preschoolers through eighth graders, had parents transporting their own kids even before the pandemic, so they don’t have to worry about running additional bus routes or navigating hygiene and social distancing in the same way many public school systems do.

St. John Vianney is planning — at this point — to bring its roughly 200 students into class, in person, all five days of the school week.

Principal Heidi Miller said she’s got many backup plans across the board, even down to three different lunch menus depending on whether students need meals they can eat at their desks, in the cafeteria with a lunch monitor who can help little fingers open tricky packaging, or without a lunch monitor present.

A lot of things will look different for her students next year.

In accordance with state and federal guidelines, students who are out sick will now have to be fever-free, without medication, for 72 hours before they can return to school — which Miller notes will be particularly hard on the kids prone to ear infections and allergies.

"You’re looking at three to five days out of the classroom for a common cold," she said.

In anticipation of those longer periods out of class, SJV’s teachers are planning for virtual companions to their in-person lesson plans, so that students can still grasp the basics of each topic while they’re recuperating from home. It can’t be quite as comprehensive as in-person lessons, Miller acknowledged, as they don’t want to double teachers’ workloads, but it is a major shift from the pre-pandemic sick policy of sending homework packets home with a friend and giving the student a couple days to turn in missing work once they got back.

All schools’ plans hinge on the extent of the coronavirus' spread within their communities, and the resulting guidance from the state and county health departments — "That goes out with every parent level right now, 'This is subject to change,'" said Miller — but they’re also subject to guidance from cities that can be at odds with their own hopes for in-person instruction.

The city of Milwaukee restricted all schools within its boundaries, from public to private to colleges, from holding classes in person in the fall. Milwaukee Health Commissioner Jeanette Kowalik has since clarified that schools can submit their opening plans for approval to reopen in person, but the city’s decision frustrated private institutions that had, unlike Milwaukee Public Schools, planned to welcome kids back to school buildings.

"Our reaction was a lot of shock and a lot of frustration, because they already knew that many other suburban schools had announced that they were going to be able to go back in person five days a week, and that’s exactly what our families wanted," said Ken Fisher, president of Wisconsin Lutheran High School, which sits near the border of Milwaukee and Wauwatosa, across 84th Street.

Fisher said WLHS plans to submit its in-person reopening plan to the city this week, with the hope of getting approval to offer in-person lessons to families who want it. At the same time, he said, the school is working to offer robust virtual options to students that are quarantined, uncomfortable or unable to return.

Private school families whose schools can’t or won’t offer instruction in the way they want may take their kids, and tuition dollars, elsewhere — some parents may homeschool kids themselves, while others who can afford to cover or share the cost of a tutor for their family or a pod of several families may take that route, and others could shop around for a different school.

Schoenfuss of the Superior Diocese said they’re not currently anticipating a drop-off in the number of families enrolled at their Catholic schools, but they are running "a tight ship" financially in case their tuition revenues drop.

Declining enrollment isn’t a major concern in Green Bay, either.

"People don’t leave places they’re happy with, people don’t leave places where they have a sense of family," said Desotell of GRACE, which has about 2,200 students across its nine schools. "If we do take a little bit of a hit, that’s a personal choice and decision that we grant them, and really want them to make on their own — if we do have a dip in enrollment, I don’t anticipate it to be large."

They could, however, see some financial disruption from private fundraising efforts. Although diocesan funds and assistance from local businesses have helped offset the costs of replacing bubblers with water bottle filling stations, or getting personal protective equipment, private schools could take a hit to some of their major fundraising streams, like galas, auctions and other fundraisers that depend on gathering a lot of people in one place. However, they're not facing the same financial fears as public school systems in Wisconsin, which are gearing up for a one-two punch of possible state cuts and declining property tax revenues.

Desotell said they’ve been able to move some events online and are looking at other ways to use technology to gather families together. Overall, she said, it is requiring a lot of sacrifices from families, students and teachers, and a lot of changes to school.

"We’re hopeful that this is going to end at some point in time, so knowing that these limitations and protocols are temporary gives us peace," she said. "Ideally we’d like to know the date when it’s going to be over (but) we don’t have that."