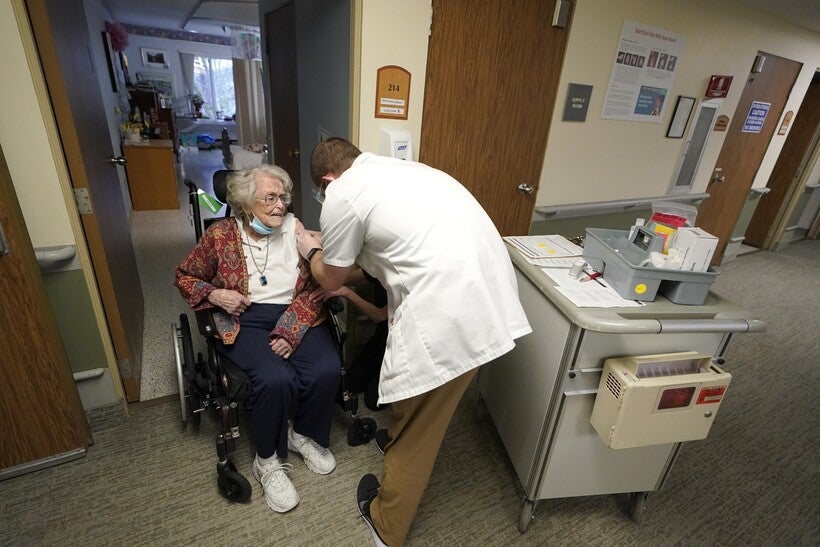 Jean Allen, 96, left, receives the first shot of the Pfizer vaccination for COVID-19, Friday, Jan. 8, 2021, from a Walgreens Pharmacist, right, at Queen Anne Healthcare, a skilled nursing and rehabilitation facility in Seattle. The facility had an outbreak of COVID-19 in May of 2020 that resulted in more than 100 positive cases among staff and residents, including Allen, and the deaths of 20 residents and two staff members. Ted S. Warren/AP Photos

DHS will raise the reimbursement rate from 77 to 91 percent next year
By Gaby Vinick
Share:

The state Department of Health Services is freeing up more money to cover Medicaid costs for Wisconsin's nursing homes amid staffing shortages and demands for care for a fast-growing aging population.

"It's going to be a real important financial shot in the arm of the nursing home organizations, and they desperately need this money to address workforce issues," said John Sauer, president and CEO of LeadingAge Wisconsin, a nonprofit dedicated to serving seniors and people with disabilities.

DHS will raise the reimbursement rate from 77 percent this year to 91 percent in 2023. On Wednesday, the department said it's following a recommendation by the Governor's Task Force on Caregiving, with most of the money supporting better wages and benefits for direct care workers.

Since 2016, Wisconsin has lost 56 nursing homes, 10 of which closed this year, according to data from DHS.

"We know there are probably a handful of facilities that are probably contemplating right now whether they go through with closure," Sauer said.

"So I guess we're paying for the inadequacies of our payment system of the past, it caught up with us ... and it was heightened by and made more acute with the pandemic and the general, kind of systemic workforce crisis," he continued.

Nursing home agency leaders say the money is a boon for long-term care facilities to recruit and retain workers.

Rick Abrams is the president and CEO of the Wisconsin Health Care Association and Wisconsin Center for Assisted Living. He said the organizations hope to work with the state to create standards that allow facilities "to hire people at a higher wage because they know that they're going to be reimbursed for it."

DHS says the funding is expected to reach nursing facilities in the next 60 days. But both Sauer and Abrams say care facilities are not out of the woods just yet. Research shows wages paid to individual workers are historically slow to respond to inflation.

"The sad thing is, for some facilities, it's probably too late," Sauer said, adding that some nursing homes have been unable to staff their beds. That has led to a loss of nearly 2,700 nursing home beds in Wisconsin since the start of the pandemic.

Since January, there have been over 400 changes in administrator and director of nursing positions in the state, according to Abrams of WHCA/WiCAL.

"When you have that kind of turnover in your management, the processes that you absolutely need to deliver quality health care are compromised, and we can't have that," he said.

"If there's a silver lining that can be had from this terrible pandemic, it's the recognition that our long-term care infrastructure is in disrepair, and it needs much more attention," Abrams said.

Wisconsin's demographics are also shifting. By 2040, the aging population — those 65 and older — is expected to more than double. The projected growth rate for that group is 72 percent, compared with 12 percent for Wisconsin’s overall population, according to a report by the Governor's Task Force on Caregiving.

Sauer said that doesn't mean more nursing home beds will be built to match the rate of growth.

"The needs of people who reside in our nursing homes will intensify. The level of services they need, the specialization of care that they require, I think, will increase over time. It's already at a historic high, but I think that trend is going to continue," Sauer said.

That view is on par with a projection by DHS: "The demand for long-term care services will rise faster than the workforce will grow in the coming years," DHS said in the Wednesday press release. According to the department, the state budget allocated $500 million to nursing homes through 2023.

Sauer said the money was needed and warmly received.

"There's pretty much universal acknowledgment that nursing facilities have been underfunded," Sauer said, adding that the reimbursement rate boost has received broad support across the political spectrum.

"I think everyone is really recognizing that these increases are long overdue, and they certainly are much appreciated by those who live and work in nursing facilities," he added.