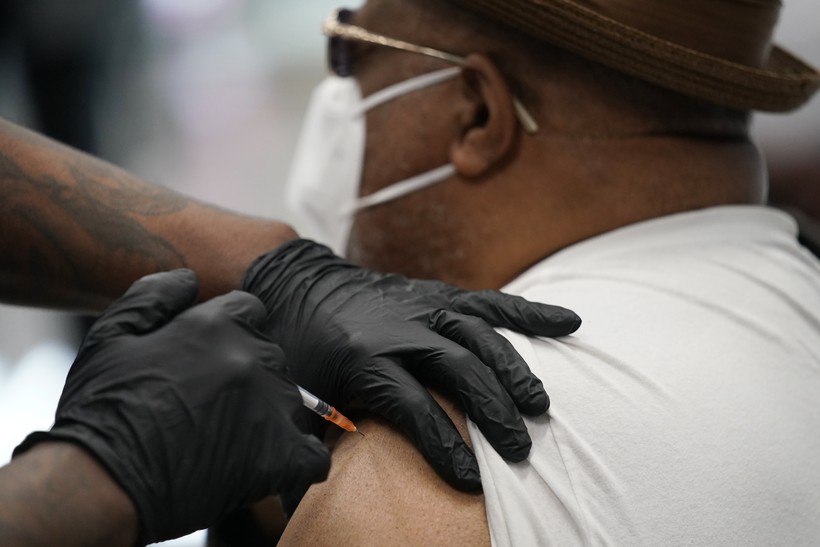 David Williams receives a COVID-19 vaccine at the Martin Luther King Senior Center, Wednesday, Feb. 10, 2021, in North Las Vegas. The makers of COVID-19 vaccines are figuring out how to tweak their recipes against worrisome virus mutations — if and when the shots need an update. John Locher/AP Photos

New reports of COVID-19 cases continue to decline in Wisconsin, according to the latest data published by the state Department of Health Services.

DHS reported 405 new cases of the disease Monday, bringing the average for the past seven days to 762 daily cases. One week ago, the average was more than 1,000 daily cases. It's typical for DHS to report fewer confirmed COVID-19 cases on Mondays, with labs usually posting fewer test results the day before. Still, the downward trend has continued since early January.

There were four new deaths from COVID-19 reported Monday, while 3,681 people tested negative.

Of the tests for COVID-19 conducted over the past week, 3.1 percent were positive for the disease, according to DHS. That rate has been on the decline since the beginning of the year. On Monday, the rate, which takes into account people who have been tested multiple times, hit its lowest point since June.

According to DHS, 1,152,025 doses of coronavirus vaccine had been allocated to Wisconsin by the federal government as of Feb 9. On Monday, DHS reported that 976,049 doses had been administered, while 715,375 Wisconsin residents had received at least one dose, representing 12.3 percent of the state population. As of Monday, 240,907 people have received both shots in Wisconsin, completing the vaccination series.

According to the Wisconsin Hospital Association, there were 399 COVID-19 patients hospitalized as of Sunday, a drop of more than 170 compared to a week ago. A total of 25,340 people have been hospitalized because of the disease, or 4.6 percent of all positive cases.

The latest figures bring the overall total of positive cases in Wisconsin to 555,708, according to DHS. A total of 6,166 people in Wisconsin have died from COVID-19.

In Iron, Iowa and Oneida counties, at least 18.5 percent of residents had received at least one dose of COVID-19 vaccine as of Monday, outpacing the rest of the state.

Wisconsin's daily testing capacity — based on the availability of test supplies and adequate staffing — has grown from 120 available lab tests in early March to 59,237 as of Monday. The number of actual people with new test results reported Monday was 4,086.