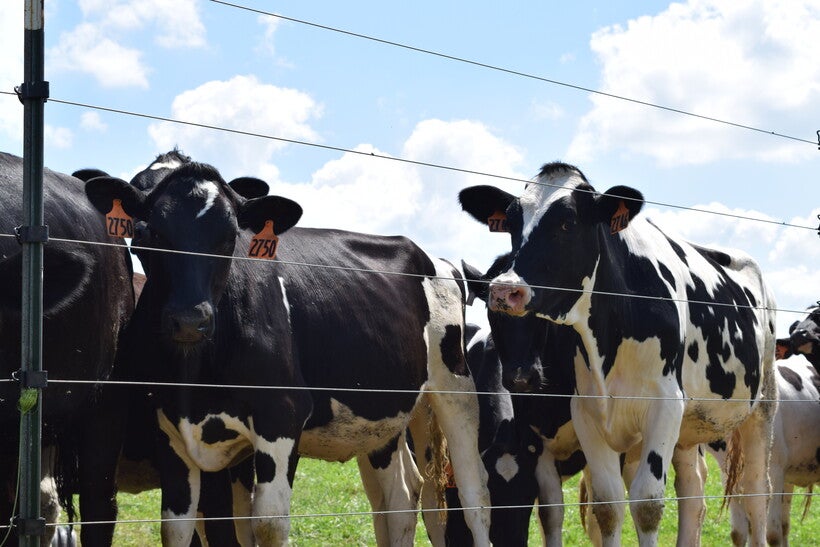 Dairy and beef cattle on a farm in Coon Valley, Wis. on Wednesday, August 18, 2021. Hope Kirwan/WPR

Wisconsin has fewer dairy farms. So how are they producing more milk?

Dairy experts say farms are getting bigger, better at caring for cows so they produce more
By Hope Kirwan
Share:

The number of dairy farms in Wisconsin continues to decline every year. The state lost 360 dairy herds, or about 5 percent, in 2021, ending the year with 6,572 licensed producers.

But Wisconsin dairy farmers also produced more milk in 2021 than ever before. According to the U.S. Department of Agriculture’s National Agricultural Statistics Service, Wisconsin’s total milk production was 31.7 billion pounds of milk last year. That surpassed the previous record set in 2020 by about 3 percent and continued a 16-year streak of annual production increases.

While the steady growth in milk production might seem counterintuitive given the decline in dairy farms, experts said it represents a number of trends driving the future of dairy.

Dairy farms are getting bigger

The consolidation of farms seen across agriculture is a big part of why the state has fewer licensed dairy producers, according to Mark Stephenson, director of dairy policy analysis at the University of Wisconsin-Madison.

"In many cases when farms sell out, most of their cows may go to other dairy farms. And so the remaining farms have gotten a little bit larger," Stephenson said.

He said growth among the largest farms in the state is the biggest contributor to Wisconsin’s overall production increase.

But herds are trending bigger across the dairy industry, Stephenson said, and that means there are far fewer that fall into the smallest categories.

"In many cases, it's because (a farm) kind of graduated from a smaller size category up to the next one."

Stephenson said the dairy industry has been using breeding for a long time to improve milk production, selecting the best milkers in their herds to produce the next generation.

"Dairy cows have just become genetically superior to be able to consume food like hay and corn silage … and turn that into milk. And our highest producing dairy cows are really at an astounding level — much, much above the average," Stephenson said.

Milk production per cow reached a record high in 2021 at 24,884 pounds, almost 2 percent higher than the previous year.

Tera Montgomery, dairy and animal science professor at UW-Platteville, said farmers are also getting better at caring for animals that produce more milk as a result.

"She's not just a production unit. She's an animal, and we’ve got to care for her," Montgomery said. "We want to take a look at what are we doing from a management perspective that allows these amazing animals to show us what they're capable of."

Just like an athlete, what cows eat makes a difference in their performance. Montgomery said producers have learned to better balance the sweet stuff like corn, which she said is like candy for cows, with healthy fiber like hay.

She said producers are also getting better at keeping animals healthy and reducing the need for antibiotics, which can decrease a cow’s milk production.

"If we can detect earlier in an animal when she is potentially going to be having a health event, then we can use some other preventative measures," Montgomery said. "If we are going to use antibiotics, we use less antibiotics."

She said preventing the use of antibiotics also saves farmers from having to throw out that cow’s milk. That's a practice to prevent any medicine from ending up in the milk supply.

Not your grandpa’s milk parlor

Montgomery said farms are increasingly adopting new technology, which can make a big difference in increasing the milk production per cow and the overall health of herds.

Robotic milking machines have been getting better and cheaper for producers to add to their farms. With growing problems finding enough farm labor, Montgomery said more farmers are seeing them as investments in their future.

And she said they also grow production by allowing cows to be milked more frequently throughout the day, which she's seen at UW-Platteville’s farm. There, some cows are milked with a robotic milking system and others in a traditional milking parlor, where a person attaches the milk equipment by hand.

"The cows are choosing to go through the robot more times per day than what they would if we were milking them in the parlor," she said. "We milk the parlor cows twice a day, and the robot cows are averaging close to four times a day. Some go in as often as five or six times a day."

Montgomery said research shows milking a cow more frequently throughout the day is easier on the animal, encouraging them to move around more and increasing their appetite. It also naturally increases their ability to produce milk.

She said other farms use technology to track individual animal’s health or use robots to keep feed within easy reach. Low-tech tools like waterbeds for cows also go a long way to increase animal comfort, encouraging animals to get up more frequently by lessening the impact on their joints.

Growing for the market

There’s no question dairy farms can produce more. But Montgomery said the reasons why they want to is more varied.

"I could talk to, you know, 100 farmers and I think that they would all have different reasons for it. Some want to produce more because they want to be able to have something for their kids to come back to," she said. "In different parts of the state, there's a demand for more cheese … And I think that there's also just a desire to do better and a lot of people still think that more milk production means that you're doing better."

She said focusing on more efficient or more sustainable production might be a better choice for some producers.

Stephenson said prices also have a big impact on why farmers want to produce more. He said other dairy states like California did not see the same growth in milk production in 2021 because of the rising cost of feed. Wisconsin producers are able to save by growing their own feed, he said.

"What the farmer ultimately cares about is the difference between what they're earning for the milk that they sell and what it costs them to produce that. Feed prices can be going up as they are now pretty rapidly, but milk prices are going up even a little bit more for them. So this does not look like a bad year for dairy farmers and profitability," Stephenson said.

But producers still have to walk that fine line between growing to meet demand and overproducing milk to the point where prices fall, like they did in 2015.