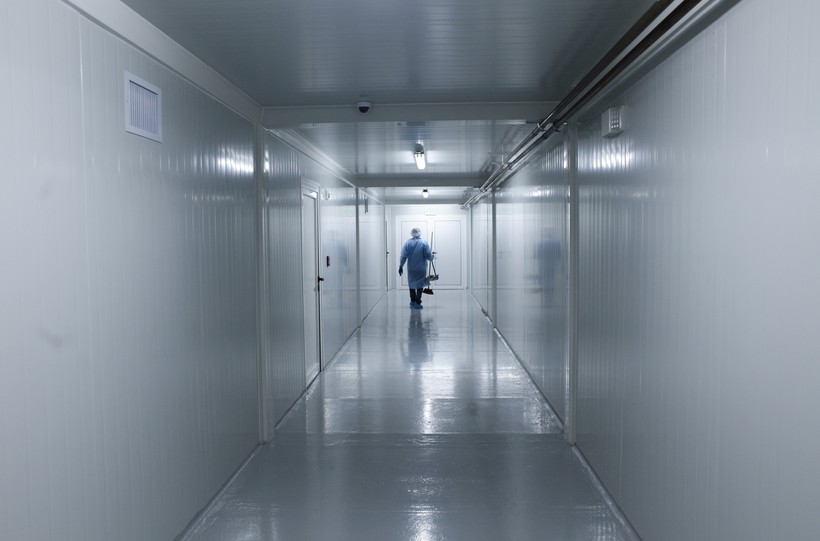 A worker wearing protective gear walks down the corridor of a new health facility, built on a parking lot of the Albrook shopping mall, that will take in patients infected with the new coronavirus, during a media presentation in Panama City, Thursday, April 16, 2020. Arnulfo Franco/AP Photo

Wisconsin Guidelines On Ventilator Use Still Under Review

Committee Has More Time To Determine How Scarce Medical Equipment Would Be Allocated If Pandemic Worsens
By Shamane Mills
Share:

A state advisory committee has not made any decisions on ventilator allocation in the event Wisconsin runs out.

Fourteen states have crisis standards of care but there has been pushback regarding initial suggestions about what, if any, guidelines Wisconsin should have during the COVID-19 pandemic and other emergencies.

State health officials say there shouldn’t be guidelines without public engagement. How to obtain stakeholder input hasn’t been determined but members of the State Disaster Medical Advisory Committee believe they have enough time to come up with guidelines that are generally accepted.

The Ventilator Allocation Advisory Workgroup has sent recommendations to the advisory committee to consider and potentially vote on.

"Understandably there was a lot of pressure on the (Ventilator Allocation Advisory) work group with anticipation of a surge," said Mark Kaufman, chief medical officer with the Wisconsin Hospital Association (WHA). "But I think we all feel that pressure is less. So, I think it would be a great idea to take some time to step back if the nature of the surge allows that and to move forward with some sort of outreach."

"A few weeks ago we had a pretty grim outlook for what COVID-19 could mean for our state," Evers said in a press teleconference Thursday. "According to a model created by the (state) Department of Health Services, Wisconsin was projected to have between 440 and 1,500 deaths from COVID-19 by April 8. But safer-at-home is working, folks. And it’s because of you that we are where we are today."

There are 3,875 positive cases of COVID-19 in Wisconsin and 197 people in Wisconsin have died from COVID-19 as of Thursday afternoon, according to DHS figures.

Evers said the closure of most businesses and people staying at home for the past three weeks has saved an estimated 300 lives, perhaps as many as 1,400.

According to WHA, there are 1,246 ventilators across the state. As of Thursday, 351 were in use.

Disability groups have expressed concerns about keeping ventilators for people already using them, having an appeals process for someone who may not get one, and using a one-year survival rate as a benchmark for who should or should not get the life-saving breathing machines.

"In our experience, people with disabilities generally don’t do well when medical professionals start guessing about how long they might live. We see no clear way around this problem. Disability sensitivity training of the triage team is the only way to manage this risk," members of the Survival Coalition wrote in a letter to State Disaster Medical Advisory Committee.

Nevertheless, the coalition said it agreed with much of the work group’s recommendations, which have since begun to be revised.

"There has been a clear attempt to be fair and to avoid disability discrimination," they wrote.

Some Wisconsin hospitals already have guidelines on ventilator use if there aren’t enough. During the committee meeting, concerns were expressed regarding liability for health facilities not following any state guidelines that might be approved.

An official with DHS stressed any recommendations should not be legally binding, making a comparison with state advice on how hospitals could conserve personal protective equipment during the pandemic.

"I think this is a document that serves a public health purpose, not a legal or regulation purpose. In a setting where there’s scarce ventilator resources there’s lives at stake, and we need an ethical framework to do this in a thoughtful way that people feel good about," said Ryan Westergaard, chief medical officer of the Bureau of Communicable Diseases at DHS.

But there could be families that disagree with a decision denying a ventilator to an ill patient. And they might sue.

"I think at the same time, looking at the other side of the coin is going to be important at least from a legal standpoint," countered Dr. Jon Temte. "Let’s say, for example, a small, rural hospital follows the guideline and they end up being sued because the family didn’t like the application of the state guidelines. I think we need to understand the ramifications of having broad guidelines and whether or not that becomes or is seen as standard of care. It’s a minor point but will help with adoption of guidelines."

With health officials in agreement that social distancing measures appear to be keeping infections at a manageable rate, the committee has more time to prepare guidelines.

"I still do firmly believe that if for some reason we do hit a crisis period, I feel like some document is better than none," said Dr. Azita Hamedani, chair of the State Disaster Medical Advisory Committee.