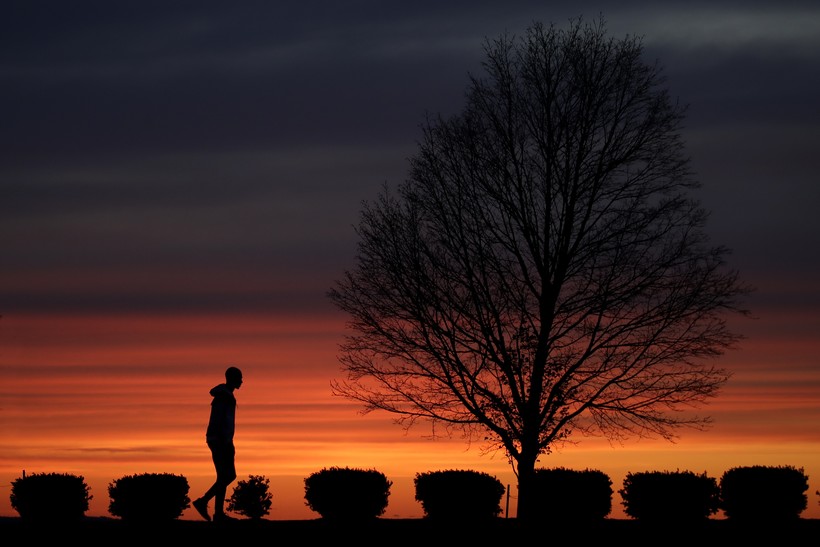 A man walks alone in a Kansas City, Mo., park at sunset Monday, April 13, 2020, as stay-at-home orders continue in much of the country in an effort to stem the spread of the new coronavirus. Charlie Riedel/AP Photo

The goal of such orders is to slow the spread of COVID-19 and lower the number of cases the state sees at its peak.

The order extending the timeframe states all public and private K-12 schools will remain closed for the rest of the school year.

During a press briefing Thursday afternoon, Evers said he knows "it's not the ideal situation" and the administration "will work with" the state Department of Public Instruction. Districts should "continue to do whatever they can to make sure that teachers are interacting with kids," Evers said.

Like under the original order, people don't need permission to leave their homes, but are only allowed to do so for specific things, like going to the grocery store or to the doctor. People are still allowed to exercise outside, but are required to keep 6 feet between themselves and others, unless they live with the person. Group sports, like basketball, soccer and ultimate frisbee, are banned. Playgrounds will also remain closed.

Essential businesses and operations, such as hospitals, grocery stores, hardware stores and pharmacies, will continue operations and don’t need any special certification to do so.

Wisconsin has been under the restrictions since March 25.

"A few weeks ago, we had a pretty grim outlook for what COVID-19 could mean for our state, but because of the efforts of all of you, Safer at Home is working. That said, we aren't out of the woods just yet," Evers said in a statement Thursday. "As I've said all along, we are going to rely on the science and public health experts to guide us through this challenge. So, as we extend Safer at Home, I need all of you to continue doing the good work you've been doing so we can keep our families, our neighbors, and our communities safe, and get through this storm together."

The new order also mandates essential retail stores limit the number of people present in the store at one time, provide proper social-distance spacing for those waiting to enter; and provide at least two hours of shopping per week for vulnerable populations.

The changes in the new order go into effect Friday, April 24.

In a press teleconference Thursday, DHS Secretary Andrea Palm said the state must "scale up testing capacity" and that it's a "critical" and "fundamental" part of managing the virus.

Palm said Thursday the state has 29 labs that are able to conduct a total of 7,578 tests per day.

"Before we lift Safer at Home, the steps of testing and more robust public health measures must be in place," Palm said in a statement Thursday. "These steps will help us reduce the risk of a second wave of the virus. If we open up too soon, we risk overwhelming our hospitals and requiring more drastic physical distancing measures again."

Bipartisan Coalition Of Governors Will Work Together To Reopen States

At the Thursday press conference, Evers said Wisconsin has joined a partnership with other Midwestern governors who will coordinate on ways to reopen the economy in the Midwest region.

"We can’t think about this like flipping a light switch," Evers said of reopening the economy. "It's like turning a dial."

The other governors participating in the coalition are Govs. Gretchen Whitmer of Michigan, Mike DeWine of Ohio, Tim Walz of Minnesota, J.B. Pritzker of Illinois, Eric Holcomb and Indiana and Andy Beshear of Kentucky. Beshear, Evers, Pritzker, Walz and Whitmer are Democrats; DeWine and Holcomb are Republicans.

The Marquette University Law School poll on April 1 found overwhelming support for Evers' stay-home order, with 86 percent of Wisconsin voters saying it was appropriate for the governor to close schools and businesses.

But there have been signs of pressure from those who want to see restrictions lifted.

A protest is planned at the state Capitol next Friday; Evers said he supports protesters' First Amendment rights and hopes they will practice social distancing. On Wednesday, protesters gathered at the Capitols of Michigan and Ohio protesting similar restrictions.

"Health and safety are a priority, however to extend this order for another month without a plan for how to reopen the state or clear benchmarks for an early expiration is simply unacceptable," Fitzgerald said in a statement.

He said the Senate is "planning to look for legal or legislative relief" to change the order.

At the Thursday press conference, Ryan Nilsestuen, Gov. Tony Evers' legal counsel, said the extension of the order is legal under longstanding powers held by the state Department of Health Services to fight infectious disease outbreaks, such as closing down businesses found to cause a public health risk.

Fitzgerald said since rural counties haven't seen the number of cases as urban and suburban areas have, they should not have to have the same restrictions. The Evers administration's position is that because people travel throughout the state for work or for other reasons, it's necessary to have a statewide policy.

During a Milwaukee Press Club event Thursday afternoon, state GOP Chair Andrew Hitt said there needs to be more communication about how the economy is going to open back up.

"We have a lot of people who are in a lot of trouble because the government has shut us down for so long, and that is concerning," Hitt said. "People are going to be concerned about that. They’re going to have to make decisions about do they keep their business open? Do they pay their employees? ... We need to have better communication."

Law enforcement agencies have been enforcing the order. Penalties for not complying have included citations, arrests and charges.

According to NPR, the number of people filing for unemployment climbed by another 5.2 million last week.

"Now is the time to be focused on (fighting the spread of COVID-19)," Hughes said. "If we don't do that work now, we'll fall back behind the curve ... and customers won't be comfortable coming into your stores or sitting in your restaurants, and employees will feel uncomfortable working there."

Minnesota's stay-at-home order was extended earlier this month from April 10 to May 4. It went into effect March 27.

Michigan's stay-at-home order ends April 30. It was extended earlier this month. It went into effect March 24 and was to last at least three weeks. Michigan's governor said she wanted to see a "steady decline" before lifting the order.

As of Thursday, Iowa hasn't issued a formal stay-at-home or shelter-in-place order. The governor there has said restrictions she has issued during the pandemic have the same impact such orders have.