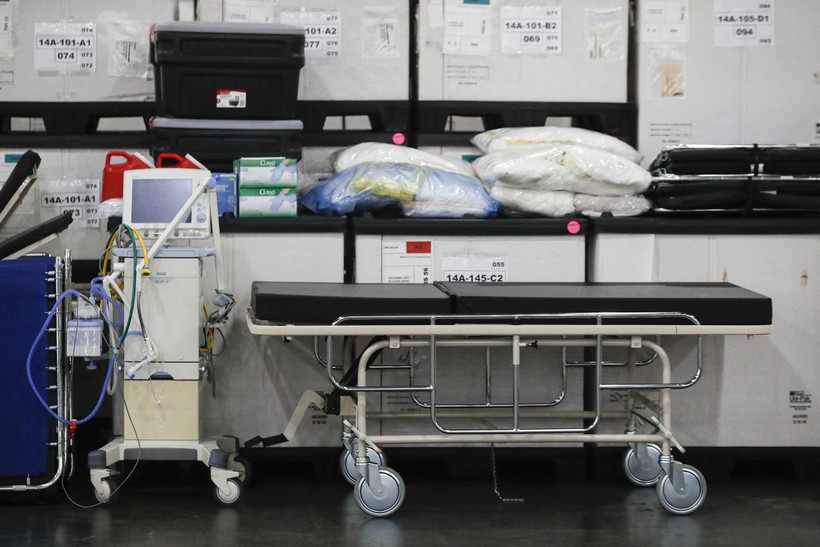 This Monday, March 23, 2020, photo shows medical supplies and a stretcher displayed before a news conference at the Jacob Javits Center in New York. Health care workers are dreading the prospect of deciding which patients would get a ventilator that could save their lives. John Minchillo/AP Photo

Ethics experts and critical care workers are helping the state come up with guidelines on who should have access to ventilators during the COVID-19 pandemic.

Recommendations from the Ventilator Allocation Advisory Workgroup indicate younger people wouldn't necessarily be put on a ventilator instead of an older patient in the event there's a shortage of the life-saving breathing machines at Wisconsin hospitals. Likewise, health care workers wouldn't be guaranteed a ventilator over someone else who needed one under recommendations which could get approval next week.

Factors for making decisions on ventilator use were discussed at a meeting of the State Disaster Medical Advisory Committee Thursday morning, but not voted on. The criteria include the likelihood of surviving after leaving the hospital and the patient's chances of living at least a year after being discharged. After that, age would be considered.

The Arc Wisconsin, a group that advocates for those with intellectual and developmental disabilities, has been watching the development of those guidelines closely. Officials said they fear the measures won't be available in time.

"Because Wisconsin is so far behind in developing this crisis of care standard, we're now going to have a patchwork of policies being implemented by hospitals around Wisconsin," said Lisa Pugh, executive director of The Arc Wisconsin. "There’s no guarantee these will be out quickly enough to provide guidance to local health care facilities as they have patients coming in needing this treatment."

Wisconsin has 1,233 ventilators and  330 were in use as of April 9, according to data from the Wisconsin Hospital Association. In late March, Gov. Tony Evers said the state is trying to get more. But so are other states.

In its report, the Ventilator Allocation Advisory Workgroup noted ventilators don't assure survival and stressed it was important to explain the need for rationing, something that is done with organ donation.

Dr. Norman Fost, a professor emeritus of pediatrics and bioethics at the University of Wisconsin-Madison School of Medicine and Public Health, leads the Ventilator Allocation Advisory Workgroup. He said there was general agreement on having uniform guidelines within the state.

"This is to prevent hospital shopping and also to prevent understandable distress in individuals who see different criteria being used in different hospitals and consequently may wonder why, for example, their relative did not receive a ventilator while a neighbor, who has a similar health profile, did," Fost said in letter outlining the workgroup's recommendations to the committee.

Several hospitals already have their own guidelines, making uniformity unlikely.

Still, guidelines suggest the decision shouldn't be solely left up to the doctor treating the patient, and the chance for recovery should be taken into consideration

"Using a ventilator for a patient who is highly likely to die despite treatment will result in two deaths instead of one: the death of the patient who will die with or without treatment, and the death of a waiting (patient) who has excellent prospects for survival," wrote Fost.

Committee members were asked to consider the following example: Two patients in an intensive care unit are in need of a ventilator. One is an 80-year-old patient with a reasonable prospect of surviving this acute hospitalization, who is, however, likely to die within a few years due to co-morbid conditions. The other is a 20-year-old patient with an equally reasonable prospect of surviving this acute hospitalization, with an expectation to survive for many decades post-discharge. The principle of saving the most lives doesn't provide a strategy for distinguishing between these two patients, said Fost, whereas saving the greatest number of life-years does.

The work group also supports decisions made only for medical reasons, not based on a number of other considerations, including the ability to pay, incarceration status, citizenship status or disability.

The latter is a concern of The Arc Wisconsin. The group wrote a letter to the State Disaster Medical Advisory Committee prior to its meeting, asking that Wisconsin’s crisis standards of care specifically acknowledge provisions found in the Americans with Disabilities Act and the Affordable Care Act that protects people with disabilities against discrimination in receiving medical treatment.

"These laws broadly protect people with disabilities against discrimination in receiving medical treatment. The laws apply to hospitals experiencing a medical equipment, bed, or staffing shortage during the COVID-19 pandemic as well as state policies concerning how resources should be allocated in the event of such shortages. Unfortunately, we have seen other states adopt standards or guidance that do not respect the rights of individuals with disabilities," the letter stated.

Standards set by other states quickly encountered legal challenges. On Thursday, the Office for Civil Rights (OCR) at the U.S Department of Health and Human Services found that Alabama had violated standards in determining who should have access to a ventilator.

"Alabama and other states are free to and encouraged to adopt clear triage policies, but they must do so within the guardrails of the law," Roger Severino, director of OCR, said in a statement.

In addition to withdrawing the discriminatory policies, Alabama has put in place new guidelines that contain non-discrimination provisions. The new Guidelines do not, however, address how ventilators will be rationed in the event it becomes necessary to do so, according to the Center for Public Representation which filed the complaint along with the Alabama Disability Advocacy Program.