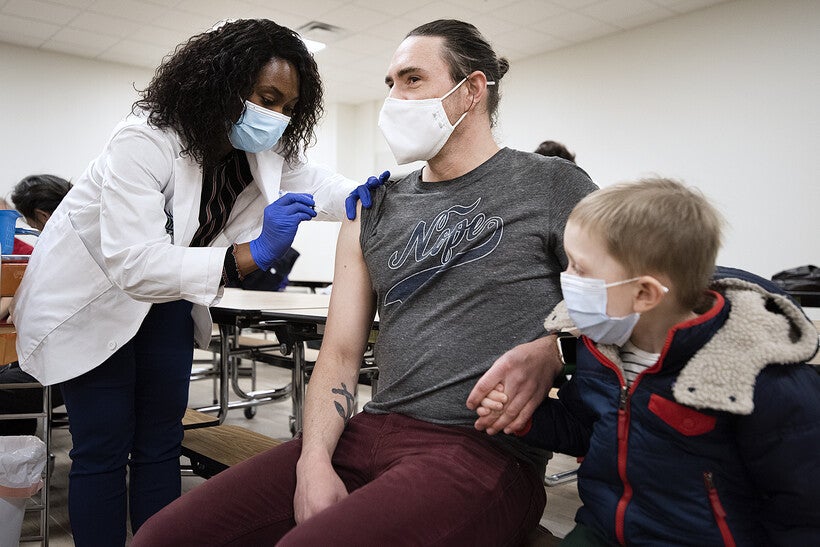 Scott Mizzen of Milwaukee holds hands with his son, Harrison, as he receives a COVID-19 vaccine Thursday, March 11, 2021, at Hayat Pharmacy in Milwaukee, Wis. Angela Major/WPR

Republican legislative leaders on Wednesday praised the Evers administration’s rollout of the COVID-19 vaccine in Wisconsin, a change from widespread criticism from the state GOP when the vaccination effort began earlier this year.

"(The state health department) had a rough start, getting the vaccines out early," LeMahieu said. "But our state, I think, over the last month or two has done a really good job getting people vaccinated."

In mid-January, GOP state lawmakers called a hearing to criticize vaccine rollout in Wisconsin. They argued the state’s process for determining eligibility was too bureaucratic and cumbersome and said the state Department of Health Services' projections for when the vaccine would be available to the general public were "unacceptable." At the time, Wisconsin lagged several Midwestern neighbors in distribution by about 1 percent.

On Wednesday, Vos equated the early vaccine distribution to "some false starts."

"Kudos to the administration for actually doing a better job after, you know, some false starts with the vaccines," he said.

According to DHS, 2,384,898 vaccines had been administered statewide as of Tuesday. About 26 percent of the population has received at least one dose.

Earlier this week, the Legislature approved a bill that would bar state and local health officials from requiring members of the public to be vaccinated. Gov. Tony Evers hasn’t said whether he will sign or veto the proposal. Another bill banning employers from requiring vaccines has been approved by the Assembly, but not the Senate.

During Wednesday’s event, Vos said he plans to be vaccinated.

"I intend to get a vaccine, I think most Wisconsinites do," he said. "This is where we need to persuade people, not have government mandates."

A national poll by Marist College with NPR and PBS NewsHour released earlier this month found a sharp partisan divide in attitudes toward the vaccine, with Republican men most likely to say they don’t plan to be vaccinated.