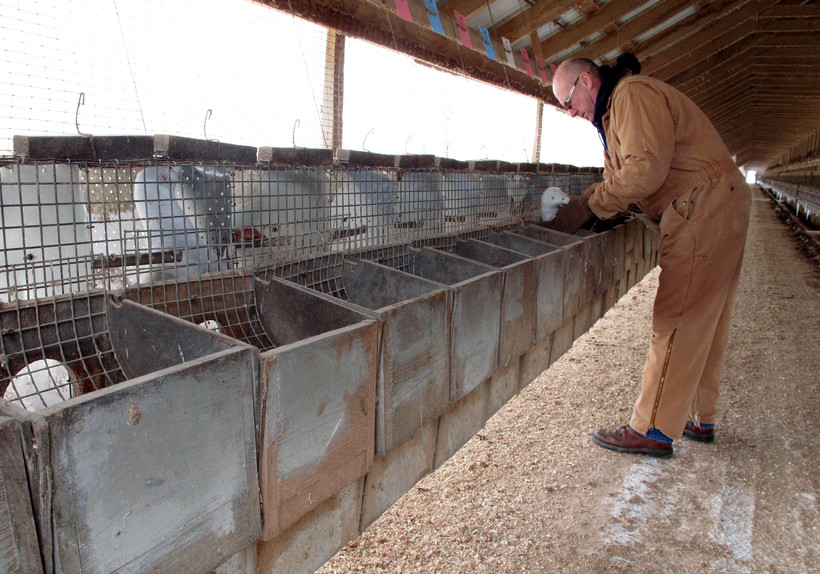 In this Feb. 12, 2013 photo Bob Zimbal checks a row of mink cages at his fur farm in Sheboygan Falls, Wis. Zimbal says he has 54,000 breeding females, 26 miles worth of cages and an on-site feed plant. Carrie Antlfinger/AP Photo

Mink farmers say ban included in a bill passed in February was a shock. Now they're fighting to keep it out of the final version of the legislation.
By Hope Kirwan
Share:

Wisconsin's mink farmers say it was a shock to hear an amendment to a federal bill would ban the purchase, sale and transportation of their animals. Now, they're working with Republican members of Congress and industry advocates to keep the amendment out of the final version of the legislation.

She had no idea Congress was considering the ban that would effectively end the mink industry until it was included as a last-minute amendment in legislation meant to allow the United States to better compete with China economically and globally. The bill, called the America Competes Act, passed the U.S. House of Representatives in February.

"It’s just a shock that that can be a thing, I guess, that they can even do that," Zimbal said.

The authors of the amendment, a Democrat from Connecticut and a Republican from South Carolina, say mink farming is a threat to public health because the animals are vulnerable to COVID-19. Researchers in Europe found cases in 2020 where the coronavirus mutated in farmed mink and was transmitted to people working on the farm. The lawmakers and animal rights groups argue mink farms could prolong the pandemic in the U.S. by producing new mutations.

Farm industry groups and Wisconsin’s congressional delegation are now leading an effort to make sure the amendment doesn’t end up in a final version of the legislation, which is being hashed out by the U.S. House and Senate.

The congressmen argued the amendment is a misuse of the Lacey Act, which was created to protect the U.S. from invasive species, and was passed without allowing farmers and manufacturers to weigh in during a public hearing.

The lack of industry input is also why the Wisconsin Farm Bureau has gotten involved lobbying against the legislation. Tyler Wenzlaff, government relations director, said the ban and the way it was passed is a threat to Wisconsin farms and rural communities.

Mink farm operators such as Zimbal argue they’ve been proactive about preventing the spread of COVID-19 on their farms.

"We actually do more than what's required of us. We vaccinated all of our mink twice and they've been boosted, all paid for by the farmers," Zimbal said. "We had biosecurity things in place before COVID and during COVID and still now, the biosecurity is even higher. So we go above and beyond what most industries do for COVID guidelines."

She said those measures include hygiene protocols and temperature checks for workers and encouraging all of their employees to be fully vaccinated.

Eighteen mink farms across the U.S. have had COVID-19 cases since the start of the pandemic, including three farms in Wisconsin. Most outbreaks happened in 2020 before a vaccine was developed for mink, including on two farms in Taylor County. A third farm in Wisconsin had some animals test positive for COVID-19 antibodies in February, indicating a previous infection. A spokesperson for the state Department of Agriculture, Trade and Consumer Protection said follow-up PCR tests on the farm were negative and no viral material was detected.

Challis Hobbs, executive director of industry group Fur Commission USA, said producers reported more than 95 percent of all farmed mink in the U.S. have been vaccinated against COVID-19. He points out that both the U.S. Department of Agriculture and the Centers for Disease Control and Prevention have said current evidence suggests the risk of animals spreading COVID-19 to humans is low.

"We've done the research, we've partnered with government agencies, and the farmers are being responsible stewards of the animals and land," Hobbs said. "So that kind of debunks the justification, in my opinion, for this amendment."

Both Hobbs and Zimbal said they’re optimistic the support from Congress members in Wisconsin and other mink producing states will be enough to prevent the ban from passing.