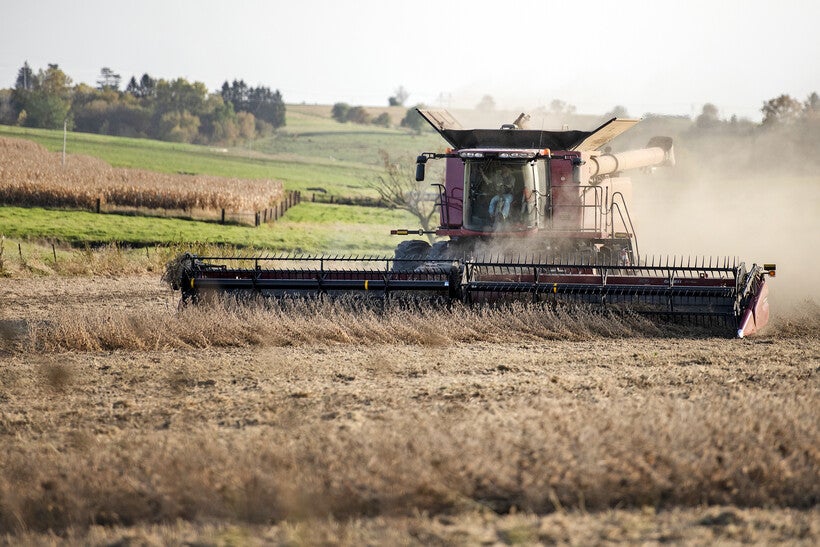 Wisconsin farms are feeling the squeeze of a tight labor market

As Wisconsin farms prepare for the upcoming growing season, some producers are having a hard time finding enough workers.

Claire Strader is an organic vegetable educator for FairShare CSA Coalition and the University of Wisconsin-Madison's Division of Extension in Dane County. Last fall, she started hearing from farmers who were worried about a potential labor shortage.

While some farms employ workers all year round, Strader said many jobs are seasonal, starting in March and April and going until late fall when harvest ends.

With producers on edge about hiring for this year, Strader said many farms started recruiting earlier than usual and developed a contingency plan for how to make it through the season without employees. That could mean discontinuing certain markets or scaling back the variety of produce that they’re growing.

"Fewer CSA members, maybe fewer farmers markets, and maybe fewer specific crops that go into their wholesale accounts," Strader said. "They're retracting those markets, in some cases, down to the level that they can do it with just the two farm owners."

That was the contingency plan for Elisabeth Minich and her husband Steven Shoemaker, who own and operate Steadfast Acres farm in Lone Rock, near Richland Center. Minich said they tried to hire a full-time employee last year and were surprised when their offers were turned down. Instead of following their plans to expand their operation to 6 acres of vegetables this year, Minich said they decided to stick to the 3 acres they knew they could manage on their own.

"We ended 2021 really nervous about 2022 essentially. Because we were expecting our second little one, and we're just not sure what 2022 would look like in terms of farm labor. We don't want to do all the farming by ourselves," Minich said.

As she's devoting more of her time to raising her children, Minich said it's becoming harder for her and husband to grow their business alone. She's currently talking with two potential employees who are interested in working this season. But she still worries about how long those employees will stick around and what happens when she’s forced to look for new hires.

In previous years, Minich said many seasonal jobs were filled by college students or recent graduates who were interested in learning about agriculture and were often overqualified for the entry-level jobs her farm offers. But she isn't seeing those workers applying for farm jobs anymore.

Strader said in many ways, farms aren't that different from other employers that are having trouble recruiting and retaining their workforce.

She points out that farm work is often physically demanding and is done outside no matter the weather conditions. And she said many farms haven’t raised their wages to keep up with other employers.

To help farms better compete in a tight labor market, Strader helped develop a program called "Becoming the Employer of Choice" that teaches producers strategies to professionalize their employment practices and keep workers happy on the farm.

But Chuck Anderas, program specialist for the Midwest Organic and Sustainable Education Service, said finding employees is a perennial issue for farms and not just driven by the current worker shortage. He said dairy farms are also struggling to find workers, and he thinks it’s because there is an over reliance on people who are willing to work for low wages and few benefits.

"There's just legally and culturally low or no protections for farm workers in general," Anderas said. "Farm work is a kind of different class of worker in the United States. And a lot of that has to do with the racist history of farm labor in the U.S., starting with enslaved people and how the agricultural system sort of extends out of that legacy."

Anderas said many farms today rely heavily on immigrant workers, including those who are living in the country without documentation, and employees with a temporary work visa called an H-2A.

For farms who hire young people as an "apprentice" or "intern," Anderas said their compensation is sometimes substandard housing on the farm and below minimum wage pay for the summer. Which he said limits who can afford to apply for those jobs to people who have savings or family to fall back on.

"I think farmers will continue having these problems for as long as farm work remains the domain of poverty wages and young, privileged people," Anderas said.

But Minich said offering workers more money isn’t a simple fix. She can’t afford to raise the wage offered by her farm until they’re able to expand their operation and sell to more customers.

"If we don't have the labor, we can't grow. But at the same time, to be able to keep up with wages, we need to grow. So you know, it's this vicious cycle," Minich said. "If we can't hire someone now, while we're smaller and can't pay a lot, then we may not be able to get to a scale where we can really value someone's time with higher wages."

She started looking into hiring an H-2A worker last year when her farm wasn’t able to find someone for their full-time job. And it’s still a possibility she’s considering as she already starts to think about the hiring landscape in 2023.