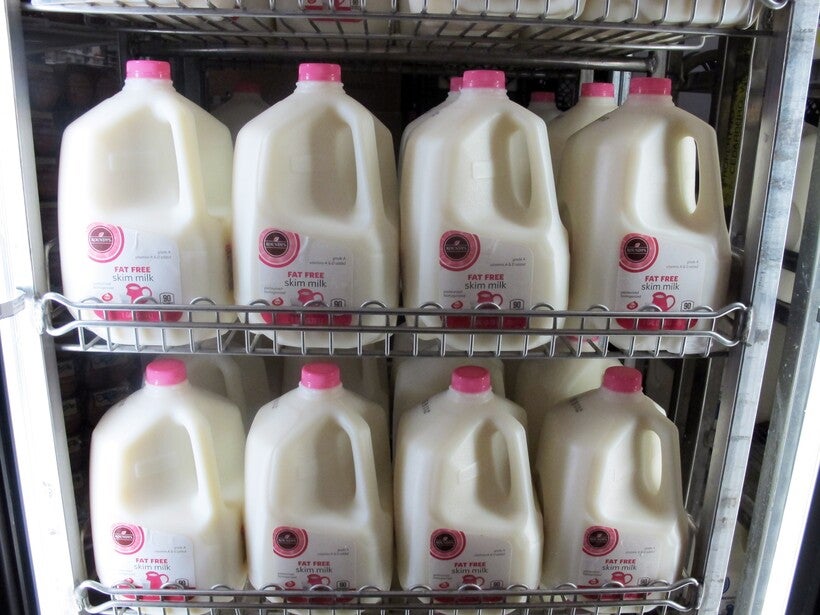 Wisconsin farmers are experiencing record high milk prices, but for how long?

Dairy farmers in Wisconsin and across the country have been enjoying record high milk prices this spring. But some market experts say producers should already start thinking about the next market downturn.

The milk used for making cheese, which is called Class III by the Federal Milk Marketing Order and establishes a minimum milk price, saw its price hit an all-time high in March. At $25.21 per hundredweight, or 100 pounds of milk, last month’s price was $6.25 higher than May 2021 and 61 cents higher than the previous record high price set in September 2014.

Bob Cropp, professor emeritus of agricultural economics at the University of Wisconsin-Madison, said high demand for milk is what drove prices up in 2014. But he said this year’s record prices are due to farmers cutting back on production.

"Milk production for several months, starting actually the last quarter of last year, has been running below a year ago," Cropp said. "Cow numbers have declined and production per cow has been below normal, so we have resulted in a tightness of the supply-demand situation."

He said farmers are decreasing their herds because the cost of feed and other essentials has gone up due to inflation and supply chain issues. That also means producers are cutting back on things like feed additives that help cows produce more milk, causing production per cow to decline.

"The higher costs are definitely cutting into the profits," Cropp said. "Margins are improving a little bit here with these $25 milk prices, so that looks good."

Cropp said he thinks higher milk prices will continue in the coming months. Milk production typically declines during the hottest summer months, so he said supply could become even more limited. In the fall, production of butter and cheese starts to ramp up in anticipation of the holiday season, when Americans tend to consume more dairy. If milk production starts to increase with more demand, Cropp said, prices could start to taper off by the end of the year. But he’s not anticipating prices to fall dramatically any time soon.

"The bigger uncertainty is really what's going to happen to the cost of feed and some of the other inputs," he said. "With the price of diesel fuel at $5 or $6 a gallon, that's really going to add to the cost of harvesting. So that type of thing will cut into farmers' profits."

And that’s exactly why Kevin Bernhardt, agribusiness professor at UW-Platteville, is warning dairy farmers to start preparing now for the next period of low prices.

"This is the pessimistic side of me, the glass-half-empty side of me, that gets nervous whenever you hit record high prices," Bernhardt said. "Because when you're talking about a commodity, whether it's milk or corn or oil or anything else, those record high prices tend to be followed by, perhaps not record lows, but a fairly serious crash to lower prices."

He said on average, milk prices hit a high point every three and a half years, with a decline to a low point and increase back to the top happening in between. But the timing of that price cycle isn’t guaranteed anymore. The COVID-19 pandemic continues to change supply chains and markets. And right before the pandemic started, the dairy industry went through an almost six-year period of low prices that turned the normal price cycle on its head.

"Right now, it's anybody's guess (what the average price cycle will be)," Bernhardt said. "But that cyclical pattern will continue, I feel confident of that. Probably, the amount of change in terms of dollars per hundredweight from peak to low will also stay the same. In fact, it might grow." 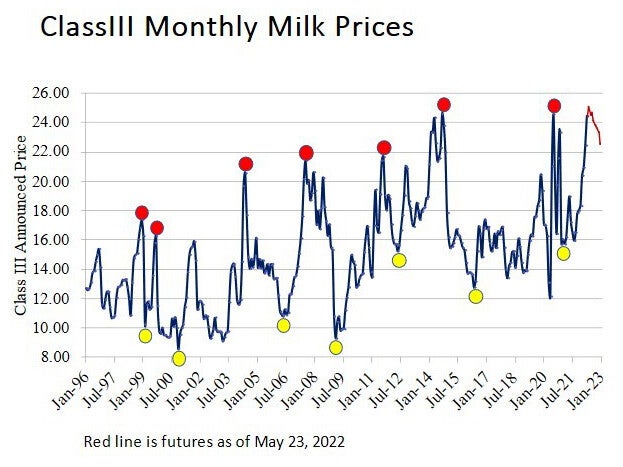 Bernhardt said the best thing producers can do before prices start to fall is catch up on business items they’ve been putting off, whether it’s making repairs or upgrading systems and machinery. He said farmers should also work on paying down what he calls "dead-weight debt," which was taken on when farmers couldn’t use normal revenue to pay their bills.

There are signs that farmers are already working on this.

A survey of agricultural lenders by the Federal Reserve Bank of Chicago found 59 percent of respondents said repayment rates for farm loans were higher in the first quarter of 2022 than they were a year ago. Thirty-two percent of surveyed bankers reported renewals and extensions of those loans were lower than the previous year.

Bernhardt said having available credit could become even more important if milk prices decline faster than the cost of fuel and other inputs for a farm.

"What happens if milk prices drop by $7, $8 per hundredweight, but the input costs drop $3? (In) that scenario, that math doesn't work," he said.

With so many factors impacting the market, from the war in Ukraine to the national inflation rate, Bernhardt said farmers need to plan ahead now while their operations are profitable.