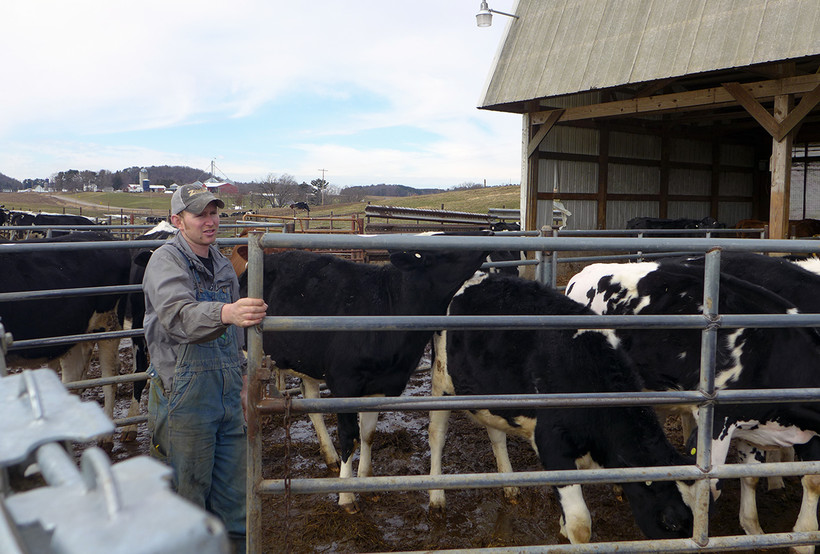 Casey Pfaff works on his parents' dairy farm that he plans to one day take over.

Steve and Kristin Pfaff milk around 150 cows on their family farm in Alma Center, Wisconsin. They bought the farm from Steve's father in 1994 and hope to pass the business on to their son Casey in the future.

But Steve Pfaff expects that farm transition won't be the same as it was two decades ago.

According to the U.S. Department of Agriculture, the average age of a primary farm operator is 57 years old. That number has continued to rise for the last 30 years, as the baby boomer generation ages and fewer young people start their own operations. For producers like the Pfaffs, navigating a financial transition of the farm can be complicated. Steve Pfaff said profits in the last decade have not kept up with the increasing cost of equipment and other inputs, even in years when there are high commodity prices. So more producers have turned to loans to cover their expenses.

"Land values have increased, so banks are willing to lend farmers more money which in turn makes it difficult for the next generation to buy farmers out," Kristin Pfaff said.

The Pfaffs are just starting to work toward a farm transition, so they have time to figure out their financial situation. But many of their farming neighbors in Jackson County aren't so lucky.

"You could take a 20-mile radius of our farm here, of the kids that are wanting to take the family farm over or farm with their folks, it's fewer and fewer," Steve Pfaff said.

University of Wisconsin-Extension agriculture agent Trisha Wagner helps farmers in Jackson County plan for the future. She said if a farm doesn't have a successor, it makes the future more uncertain for the land and for the owners.

"Many might be relying on selling their farm in order to fund aspects of their retirement or to supplement their retirement which has a lot of consequences," Wagner said. "If they can't find someone to carry on the business, what is the value of that farm?"

In the last 20 years, the number of primary operators in Wisconsin between the ages of 25 and 34 has decreased by more than half. Wagner said there isn't a shortage of young people interested in the ag industry, but it has become more difficult for new farmers to get started.

"Land, facilities, machinery, not to mention livestock, all of that at once is, for many people, cost-prohibitive," Wagner said. "Some might say, ‘Well, it was always challenging' and I think that's probably true but it's clear that many people feel like it is more challenging today."

If a farmer can't find someone to continue their operation, Wagner said they may sell their land to a larger farm or take it out of agriculture completely. In Jackson County 1 in 8 jobs rely on the ag industry, so Wagner said losing farms is an unsettling possibility.

"They're getting bigger and there are less and less of us smaller ones," Kristin Pfaff said. "I don't think we're getting pushed out. I just think we have different ideas on how we want to succeed."

That success means ensuring their son Casey can continue to milk cows on their family's farm without the pressure to expand or sell out.

But for Steve Pfaff, success also means being able to support both generations until he's actually ready to stop farming.