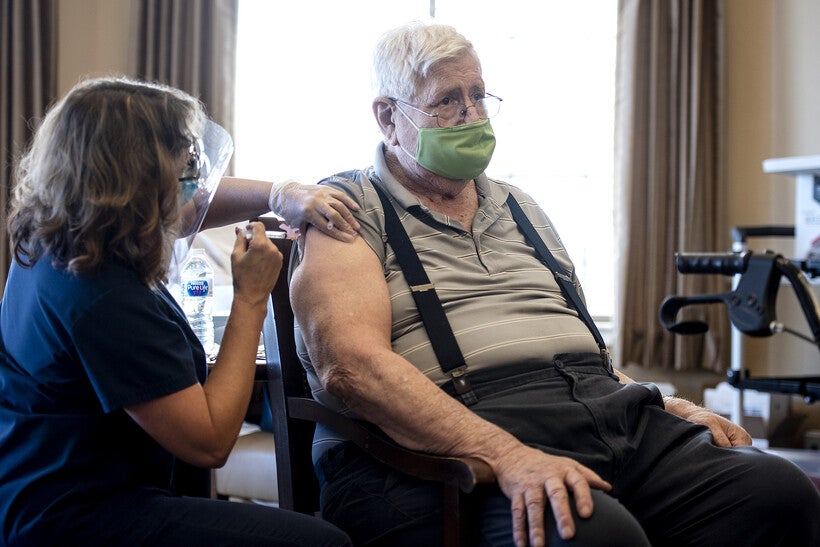 New reports of COVID-19 cases continue to decline in Wisconsin, even as concern rises over confirmation of a second case of a more transmissible variant of the coronavirus in the state.

Based on the latest data published by the state Department of Health Services, there were 681 new cases of the disease Tuesday, bringing the average for the past seven days to 970 daily cases. That is the first time in five months that number has dipped below 1,000. On Sept. 9 the seven-day average was 886.

Over 10 percent of adults eligible for vaccination against COVID-19 have gotten shots and Gov. Tony Evers says the state is working "tirelessly" to increase that number.

"But that does not mean we can let our guard down or give up the strategies we know saves lives. Our fight against this virus isn't over," Evers said Tuesday during a briefing.

There were 39 new deaths from COVID-19 reported Tuesday. On Tuesday, 3,487 tested negative.

Of the total tests for COVID-19 conducted over the past week, 4 percent were positive for the disease, according to DHS. Less than a month ago, 11 percent tested positive. The rate takes into account people who have been tested multiple times in that seven-day period.

According to DHS, 1,152,025 doses of coronavirus vaccine have been allocated to Wisconsin by the federal government as of Tuesday, while 793,474 doses have been administered and 174,482 people have received both shots, completing the vaccination series.

A graph showing the daily number of vaccinations across the state remained steady with the second highest daily total recorded on Feb. 3 when 45,873 shots were administered. DHS Deputy Secretary Julie Willems Van Dijk said Wisconsin is getting a "little bit" more vaccine from the federal government, rising from roughly 72,000 doses to 89,000 doses weekly. The state estimates it needs 7 million doses to vaccinate all the adults who eventually will be eligible for a shot when supplies increase.

According to the Wisconsin Hospital Association, there were 572 COVID-19 patients hospitalized as of Monday. A total of 25,021 people have been hospitalized because of the disease, or 4.5 percent of all positive cases.

The latest figures bring the overall total of positive cases in Wisconsin to 551,050, according to DHS. A total of 6,094 people in Wisconsin have died from COVID-19.

Wisconsin's daily testing capacity — based on the availability of test supplies and adequate staffing — has grown from 120 available lab tests in early March to 59,197 as of Tuesday. The number of actual people with new test results reported Tuesday was 4,168.