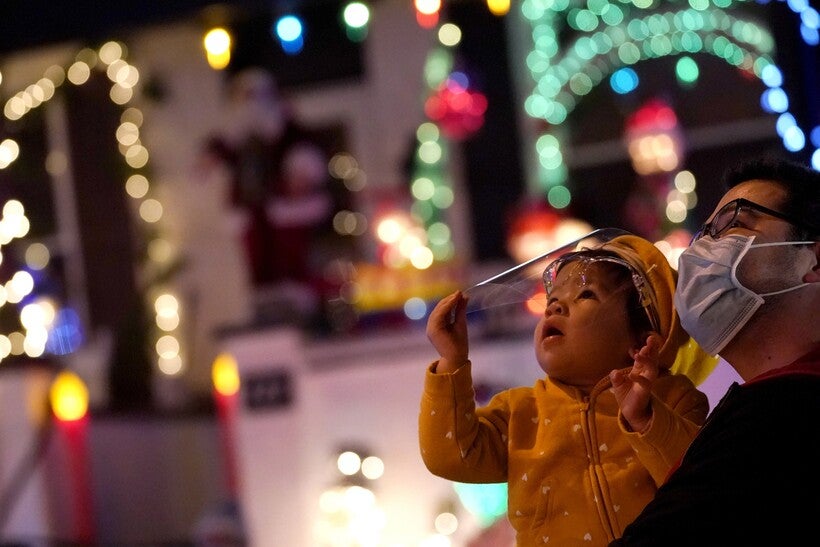 Joe McPalmer, right, and his daughter, Meya McPalmer, 1, wear face coverings to protect against COVID-19 while looking at a Christmas display on a home that's part of the Miracle on 34th Street Hampden Christmas Street Holiday Show, Friday, Dec. 11, 2020, in the Hampden section of Baltimore. Julio Cortez/AP Photo

While more COVID-19 vaccine doses are heading to Wisconsin, the state also plans to start providing a monoclonal antibody treatment to patients.

Starting Tuesday, the state's overflow facility for COVID-19 patients in West Allis will begin providing the treatment, bamlanivimab, for those in the early stages of the disease. This might prevent those infected with COVID-19 from becoming so sick they need to be hospitalized.

The growth of new coronavirus cases has declined across the state in recent days, but disease activity remains very high and 81 percent of hospital beds across the state are currently filled. The outpatient infusion center at the facility in West Allis will be able to serve up to 84 patients per week and will be separate from the area where COVID-19 patients are treated. Since it opened Oct. 14, the facility has care for 168 patients.

Meanwhile, this week, Wisconsin is expecting shipments of a second COVID-19 vaccine made by Moderna, which has been approved for emergency use by federal regulators.

"The COVID-19 vaccine is an important tool we need to battle this pandemic," said Gov. Tony Evers in a press release Monday. "While we do not have control over how much vaccine the federal government allocates to our state, I can promise that we are doing everything we can to ensure that our distribution is fair and equitable."

Last week, Wisconsin and other states found out they were getting fewer doses of the first approved vaccine from Pfizer and BioNTech than initially expected. Instead of nearly 49,725 doses, Wisconsin will get 31,500 doses in its second shipment. Over the weekend, U.S. Army Gen. Gustave Perna, who is in charge of overseeing vaccine distribution for the federal government, apologized, saying he had to lower previous forecasts to meet releasable doses.

New reports of COVID-19 cases are averaging at around 2,800 cases per day in Wisconsin, based on the latest data published by the state Department of Health Services.

DHS reported 1,435 new cases of the disease Monday, bringing the average for the past seven days to 2,816 daily cases.

It's the second day in a row that the seven-day average of daily cases has been below 3,000. Monday's average is the lowest that figure has been since Oct. 17, when that figure was 2,660.

It's typical for DHS to report fewer confirmed COVID-19 cases on Mondays, with labs usually posting fewer test results the day before.

There were eight new deaths from COVID-19 reported Monday. On Monday, 5,067 tested negative.

Of the people who got tested for COVID-19 over the past week, 26.5 percent were positive for the disease, according to DHS. That rate has been on the decline for several weeks.

On Sept. 30, DHS also introduced an alternative positivity rate, one that measures the percentage of tests that are positive, instead of the percentage of people who get a positive result. The new metric takes into account people who have been tested multiple times. The seven-day average for that number is at 9 percent.

According to the Wisconsin Hospital Association, there were 1,268 COVID-19 patients hospitalized as of Sunday. A total of 20,168 people have been hospitalized because of the disease, or 4.4 percent of all positive cases.

The latest figures bring the overall total of positive cases in Wisconsin to 458,612, according to DHS. A total of 4,425 people in Wisconsin have died from COVID-19.

Wisconsin's daily testing capacity — based on the availability of test supplies and adequate staffing — has grown from 120 available lab tests in early March to 59,165 as of Monday. The number of actual people with new test results reported Monday was 6,502.