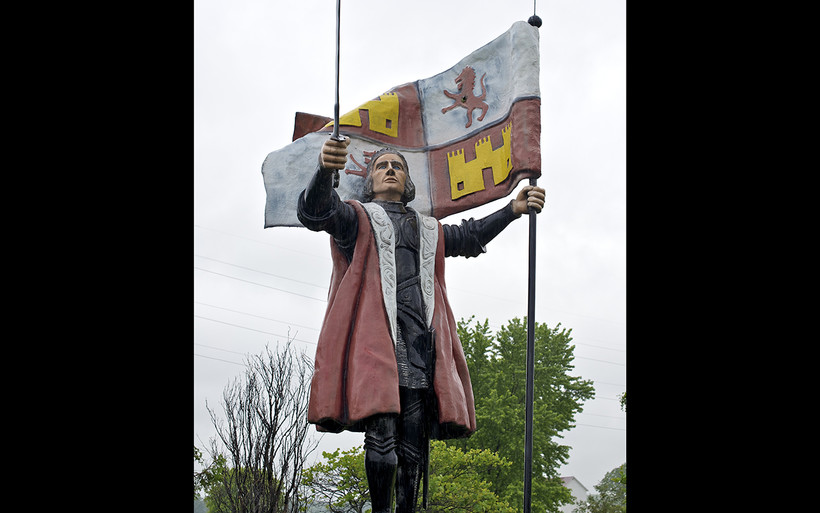 Columbus City Council debated whether to remove the statue of Christopher Columbus that stands near city entrance. Elvis Kennedy (CC-BY-NC-ND)

Wisconsin City Of Columbus Will Remove Its Columbus Statue

The statue of Christopher Columbus in the city of Columbus, Wisconsin will be removed from its spot at the entrance to the city.

The City Council in the south-central Wisconsin town of 5,000 people voted 4-1 on Tuesday night to remove the statue and put it into storage. They'll consider at a future time whether to move it to a different spot, add historical context, give away or dispose of the statue.

The council vote comes after a Columbus High School student Abbi Adams started an online petition for the statue’s removal that has received more than 2,000 signatures.

"Statues of Columbus across the nation are being taken down along with other racist historical figures," Adams' petition reads. "We should follow suit. Racial justice needs to be achieved in our nation, and even though we are a small town, we can contribute in many ways."

At Tuesday's meeting, Adams told the council that "it was never my intention to erase our history."

"In fact," she said, "it was quite the opposite. My hope has always been to provide historical context for the statue. I think it's become more and more evident that in our community many have outdated knowledge about Christopher Columbus."

Adams said her goal in promoting moving the statue is to educate people about his legacy, including the legacy of oppression of Native Americans.

The debate over the statue came as a nationwide protest movement has led to a reassessment of many historical markers. Columbus, the European-born, 15th century explorer, has historically been credited with the discovery of the New World that led to European settlement of the Americas. Those accounts are inaccurate. The continent was populated by numerous Indigenous civilizations, and Columbus wasn't the first European to make the voyage. In recent years, scholarship about Columbus' famous 1492 voyage has found him responsible for atrocities including rape and murder of Native people.

The meeting drew public comment both in favor and opposed to the statue's removal. One speaker, Jack Sanderson, said "to take it down now is to surrender to the mob." He urged the council to table the issue for study for "a year or two."

A number of other speakers, including recent high school graduates, said the change would send a worthwhile message of tolerance.

In the past, monuments to Columbus have been seen as symbols of cultural pride for Italian Americans (Columbus was believed to be Italian-born, though more recent scholarship suggests he was Portuguese) and for Catholics, who faced open discrimination in the 19th century and into the 20th century. When Congress voted in 1934 to recognize Columbus Day as a federal holiday, it was seen as a testament to America’s multiculturalism. The holiday was "an opportunity for giving to the world an example of how it is possible in this country to mold, amalgamate and blend," said New York City Mayor Fiorello LaGuardia in a speech that year.

But the tide of public opinion has turned against Columbus in many places. Last week, his statue was removed from outside city hall in Columbus, Ohio, the most populous U.S. city to bear his name. And a growing number of cities are choosing to celebrate Indigenous People’s Day in October rather than observe Columbus' birthday.

In Wisconsin, alumni of Columbus Catholic High School in Marshfield have lobbied for the school to change its name.

Nationally, many of protests and subsequent actions have focused on Confederate statues, and monuments to the Confederates have been removed or scheduled for removal in dozens of cities. On Sunday, lawmakers in Mississippi voted to change the state flag from one that included the Confederate emblem.

In Tuesday's meeting, the council briefly considered putting the question to voters in a referendum.

Council Member Ian Gray said that would be a mistake.

"I totally understand that this is contentious," Gray said, "but that’s also why I think we need to act on it, and not wait for a referendum."

Jordan Denny, a recent graduate of Columbus High School who spoke in favor of removal, said there's little danger that Columbus will be forgotten.

"The story of Christopher Columbus, whether good or bad, is taught to children for the first 18 years of their life, almost every single year," Denny said. "And this city has a decently well-advertised museum for the man. I think that brings up his name far more often than the statue that most people forgot existed until this petition was brought."