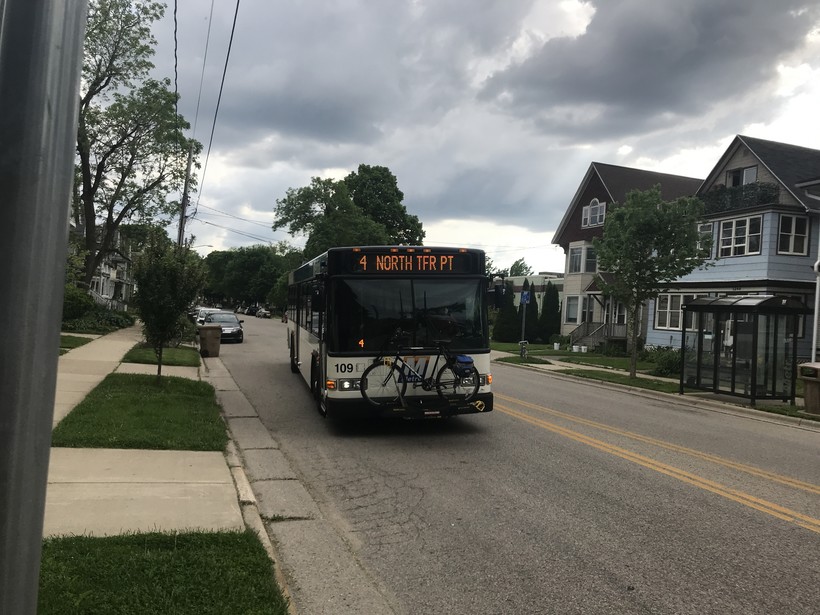 Masks are optional on public transportation, which had been among the last public spaces requiring them
By Rob Mentzer
Updated:
Tuesday, April 19, 2022, 7:20pm
Share:

Masks are no longer required on public transportation in Madison, at Milwaukee's Mitchell International Airport and at other Wisconsin transit hubs, following a ruling Monday by a federal judge.

Outside of hospitals, before this week, airplanes and buses were among the last public spaces in the state that still required masks as a pandemic precaution. The Wisconsin Supreme Court struck down the state's mask mandate more than a year ago. Local governments, the University of Wisconsin System, school districts and most businesses have also relaxed masking rules or allowed mandates to expire.

A federal judge Monday threw out President Joe Biden's executive order requiring masks on public transportation. In response, virtually all major airlines announced they would no longer enforce mask rules. On Tuesday, a spokesperson for Mitchell International Airport told the Milwaukee Journal Sentinel it would remove the mask requirement at the airport, and officials would be removing mask-required signs. Other airports around the state were doing the same.

Wisconsin transit authorities followed suit Tuesday. In Madison, Metro Transit in a statement said its mandate was no longer in effect, and staff would work to remove signage on buses and transfer points, "but it will take some time to complete."

"Metro greatly appreciates all of its riders' cooperation during the extended time this mandate was in place," the news release read.

On Tuesday evening, the Milwaukee County Transit System announced it would continue to require riders to wear masks. The reversal came after a statement Monday saying it would keep its mandate in place through May 3 and an announcement Tuesday morning saying it would no longer require masks.

UPDATE AS OF 5:00 P.M. ON APRIL 19: MCTS will continue to require riders to wear masks on County buses. Read more: https://t.co/57AmaQFJsR https://t.co/Di2PNlmiwd

Mask-wearing was a key part of pandemic protection throughout 2020 and 2021. Before the introduction of COVID-19 vaccines, masks were one of a small number of public health interventions available to help slow the spread of the disease and protect those most vulnerable to infection. Public opinion polls showed broad support for mask mandates in 2020, before vaccines were available.

Today, though, when few public spaces require masks, the transit requirement was increasingly an exception.

Smaller cities also lifted their mask mandates for public transit. In Wausau, transit director Greg Seubert said the city lifted mask requirement Tuesday morning "because we have no ability to enforce it."

At Wausau's downtown transit center, rider Ray Carawan said he was happy to see the mask requirement go. Due to brain surgeries that altered his nasal passageway, he said, "I literally, straight-up cannot breathe with something covering my mouth." And even apart from his own medical issue, Carawan said he thought requiring masks was an "overreach" that shouldn't have been allowed.

Others who were waiting on buses said they'd continue to wear masks.

Colleen Thomasgard said continuing the mandate on buses and planes made sense, because they often require people to crowd together in small, enclosed spaces. She also said for her, wearing a mask is no burden.

"I think it's really easy to wear a mask, and I would rather be safe myself and keep others safe than not wear a mask," Thomasgard said. "It's just not that difficult to do."

New recorded cases of COVID-19 in Wisconsin have been relatively stable in recent weeks, though reported testing has also declined and the percentage of positive tests has risen sharply. As of Tuesday morning, the state had recorded a seven-day average of 672 new cases per day. Hospitalizations with the disease have been declining for months, according to data from the Wisconsin Hospital Association. They reached an all-time peak in January, when there were 2,278 people hospitalized with COVID-19, nearly 500 of whom were in intensive care units. As of Monday, there were 137 people hospitalized with COVID-19, including 26 in ICUs.