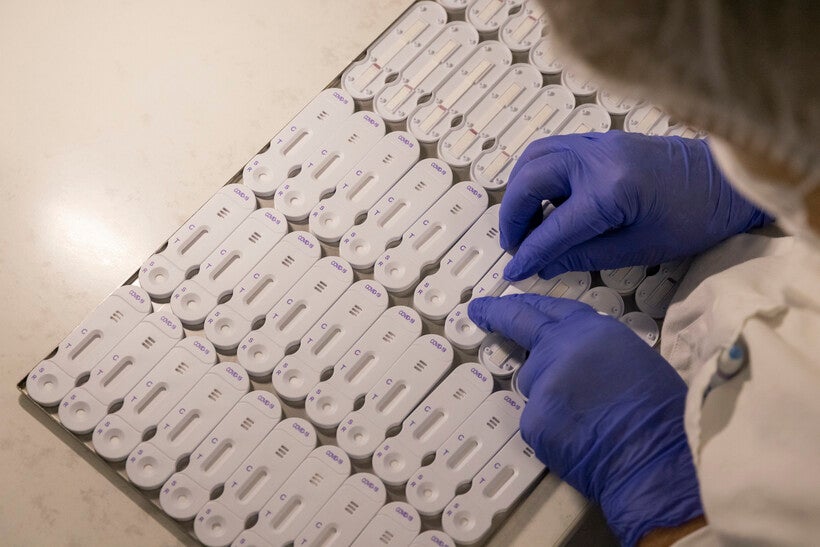 A employee works at NG Biotech, a start-up that makes an array of medical tests, including kits for use at home and by medical professionals to detect COVID-19 infections , in Guipry, western France, Friday, Jan. 7, 2022. With France breaking records in Europe for coronavirus infections, manufacturers are working flat-out to try to meet the huge demand for tests. Jeremias Gonzalez/AP Photo

COVID-19 cases are on the rise again in Wisconsin

The 7-day average of positive COVID-19 tests has doubled in the last 3 weeks
By Madeline Fox
Share:

New reports of COVID-19 cases are on the rise again in Wisconsin, based on the latest data published by the state Department of Health Services. The seven-day average of positive COVID-19 tests has doubled in the last three weeks, from 3 percent to 5.9 percent as of Monday.

"We're seeing a rise, and a sustained rise," said Dr. Ben Weston, chief health policy advisor for Milwaukee County. "Even though our numbers are still relatively low, it is a trend in the wrong direction."

Community levels of COVID-19 remain low in every county, according to the Centers for Disease Control and Prevention's guidelines, which set those levels based on the number of cases and hospital capacity in a community.

While the overall number of cases has remained low, Weston noted that's not likely to provide as clear a picture of COVID-19 spread as it used to, since the use of at-home tests — which aren't automatically reported in county or state data — is on the rise.

Weston said Milwaukee County used to average about 5,000 tests per day, with 10,000 during the height of the omicron surge. Last week, Milwaukee's seven-day average number of tests was 1,700. At the state level, the highest number of tests last week was about 18,000 — down from 60,000 in January, as omicron was peaking.

Wisconsin has been monitoring wastewater for SARS-CoV-2, which officials say can help pinpoint where the disease is on the rise and alert health officials to possible trends.

"There's no one single data source that's perfect," said Dr. Jonathan Meiman, the state's chief medical officer and epidemiologist for environmental and occupational health. "We try to find all together complimentary ways of looking at the same issue to try to get a more holistic picture of what's actually going on."

Wastewater monitoring in Milwaukee, Kenosha, Racine and St. Croix counties, for example, has shown a major increase in virus concentration over the past week.

"There are a handful of fairly consistent week-over-week increases that are consistent with increasing transmission in the community," Meiman said. "I would say, at the same time, the levels are still low."

About 64 percent of Wisconsinites have received at least one dose of a COVID-19 vaccine, which is available to everyone ages 5 and up. Vaccine manufacturer Moderna is seeking Food and Drug Administration approval to offer a vaccine for younger children. A second round of booster shots is available to certain age groups and medically vulnerable populations.

Although the rates of death and hospitalization from the disease have slowed in Wisconsin, recent research has linked the illness to other damaging health consequences. Some people contract long COVID, a chronic illness with varied symptoms. COVID-19 may cause changes to the brain, including tissue damage, and researchers have linked the disease to erectile dysfunction.

In Wisconsin, 12,862 people have died from COVID-19 since the beginning of the pandemic with an additional 1,500 deaths most likely COVID-19 related, according to DHS. The United States as a whole is approaching 1 million deaths from COVID-19.